A time when two legs was bad (for women) 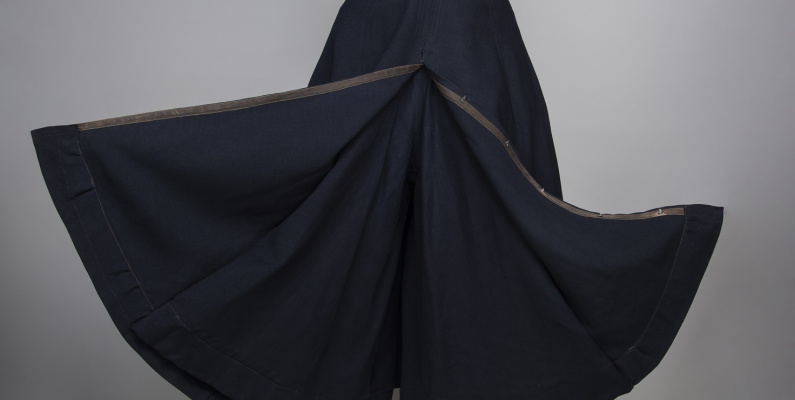 We take it for granted now that anyone of any gender can wear trousers or show their legs in our culture, but it was not always so. In the 1880s and 1890s, some women tried wearing trousers or even just divided skirts to ride bicycles or sit astride horses, but they were made fun of, and hounded by groups of men and boys.

Victorian-style dress, worn for most of the 19th century, embodied gender role differences: for men, dark, sombre colours, and shapes indicating seriousness, expanded shoulders and chests to show strength, bifurcated trousers to allow activity.  Women had small waists held in with boning, sloping shoulders, heavy and full skirts, petticoats, and fussy trimmings and accessories. Delicacy, inactivity, frivolity, and submission were suggested by their dress even if in reality women coped with a great deal in spite of such clothes.

Ridicule of women for showing their legs led to underwear being modernised first: divided drawers and streamlined combinations, chemise top and drawers joined at the waist, could be happily worn under skirts but not seen. 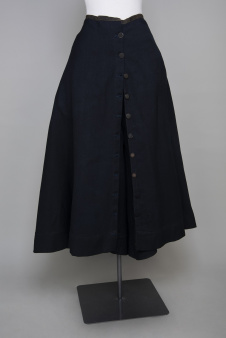 Reforming women’s dress was a fight some women were keen to take on, wearing breeches divided skirts, giving talks, and writing to newspapers.

In 1885, ‘plain-speaker’ (a woman) wrote to the Evening Star newspaper: “… fashion is all humbug. Let us do away with petticoats, stays, bustles, and heels and wear instead singlet and chemise like garment, with matching tunic and knickerbockers.”[1]

In 1893, Alice Burn, a staunch wearer of knickerbockers, was reported as saying that it was NOT man’s dress being advocated, (and trousers aren’t inherently male) but the only rational dress for a two-legged creature, at least for work and exercise.[2] 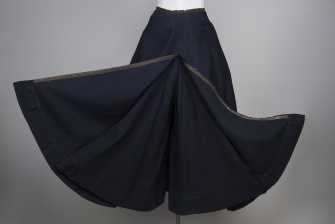 Woman’s riding skirt with flaps open to show the divided layer below. G2019.37. Gift of the University of Otago; Otago Museum Collection. Photograph by Anne Harlow.

In 1895, Mary-Jane wrote in Day Break, a weekly paper for women, that exposing the leg from the knee down was much less immodest than fashionable “full (or evening) dress, which leaves bosom, shoulders and back exhibited to public gaze… I fail to see why we should be ashamed of that part of our anatomy which enables us to perform the useful and necessary exercise of walking.”[3]

A riding skirt in Otago Museum’s collection shows how one design sought to overcome the issue of indicating two legs: the divided leg-coverings were hidden by flaps over the top front and back when the wearer was off her horse or bicycle, so as to appear to be a regular skirt.

Nevertheless, it was well into the twentieth century before trouser wearing by women was truly acceptable, even for sports.