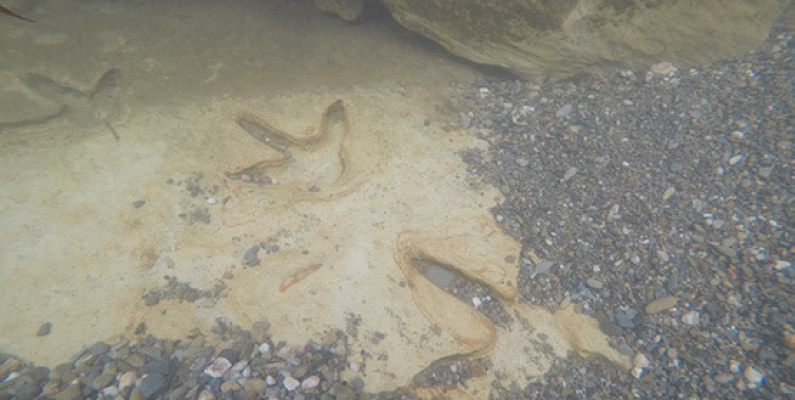 Occasionally, a discovery of something truly monumental finds its way to just the right person, even when communicated through unconventional channels.

On Wednesday 6 March, Michael Johnston, a resident of Kye Burn in the Maniototo alerted the Otago Museum via a Facebook message to some strange impressions he’d found in a swimming hole in the Kye Burn river. The query reached Kane Fleury, Otago Museum’s Assistant Curator, Natural Science, who examined the photos, spoke to Michael, and determined something potentially very significant had been found.

On Thursday 14 March, Kane headed out to Kye Burn to meet Michael and attempt to identify the markings in the river, accompanied by Emma Burns, Curator, Natural Science, and Tony Reay, Honorary Curator, Geology.

Armed with an underwater camera, snorkel and mask, Kane went for a swim in the swimming hole to examine the markings. On first inspection there were five markings, with very clear, three-pronged imprints in a hard clay substrate under a metre of water. The markings were very distinct, an astonishing preservation of the tracks made by a creature long ago.

These imprints have been determined to be moa footprints. Each footprint is about 30 cm long and 30 cm wide.

Upon further inspection in the river, another two prints were found hidden by gravel and under the bank itself, bringing the total number of prints in the track to seven.

Kane says, “From the track, we can tell that this moa was walking in a direction that was slightly curving to the right. The last major flood event on the Kye Burn was in November 2018 and it’s likely the event eroded the bank and exposed the clay slab containing the prints.”

The moa footprints are an internationally significant find and are the first reported physical prints from the South Island. Footprints like these contain information about how the birds moved about their habitat.

Pathways have been observed in the South Island but there are no preserved footprints or photographs of footprints.

Moa footprints occur in at least ten localities across the North Island. At least 25 excavated footprints exist as originals or casts of originals. Most of these prints were found on stream banks and lake shores.

Globally, footprints of extinct species are rare discoveries and in danger of being lost due to natural erosion, vandalism, and other factors. Once footprints such as these are exposed, they become fragile and quickly erode.

The Otago Museum project team, led by Kane and supported by On Lee Lau, Otago Museum Collection Officer, has partnered with Professor Ewan Fordyce and Marcus Richards from the University of Otago’s Department of Geology, who have expertise in the removal of fossil and sediment-based material for both research and display.

Professor Fordyce says, “These prints form an important path back to the past. We might imagine the moa pacing, perhaps slowly and deliberately, across a nearly dried firm muddy surface. The prints may add to knowledge of moa size, body mass, stride length, and speed.”

The Otago Museum has obtained resource consent from the Otago Regional Council, and permission from iwi, the landowner, and LINZ to extract the prints so they can be preserved and, in time, made available to researchers.

The prints are located in an area of the stream where they cannot be protected in the event of a flood, as they are exposed in a sediment-based substrate that, although harder than the overlying clay, would likely be destroyed. Access for removal is also complicated by the fact they are under a metre of water.

The extraction involves temporarily diverting the flow of the Kye Burn water around the field site, pumping out the water from a hole, and removing the prints in movable-sized pieces.

Once the prints are returned to the Museum, there will be a lengthy process to safely dry them and ensure that both the footprints and the clay substrate remains stable. Once the prints are deemed to be stable, a plan will be made to put them on temporary display for the public to see this unique find.

Otago Museum Director, Dr Ian Griffin says, “A project such as this demonstrates the importance of regional museums having skilled scientists on staff and being able to cultivate the relationships with world-class researchers so we can respond to this incredible find so quickly, and effectively.”

The process of extraction

The main water course for the Kye Burn will be temporarily diverted through a gravel bed for approximately 100 metres.

A sediment trap will be established downstream of the site to capture materials and sediments which will mitigate the downstream effects.

Any stream fauna and fish found in the area will be relocated.

The water directly overlaying the site of the footprints will be pumped across to the diversion in order to provide controlled and safe excavation conditions.

The extraction will take place in segments and each piece will be stabilised as it is removed from the stream bank.

The stream and swimming hole will be returned as close to original condition as possible after the extraction of the moa footprints from the stream bank.

The prints once extracted will be very fragile. Because we are placing the stability of the prints as the Museum’s top priority, viewing of the prints will not be possible for some time once they are at the Museum. They will require conservation treatment and monitoring as they dry. Once they are ready and stable, we will begin planning to put them on display.