Ara-moa – an update and some FAQs

home > Otago Museum Blog > Ara-moa – an update and some FAQs 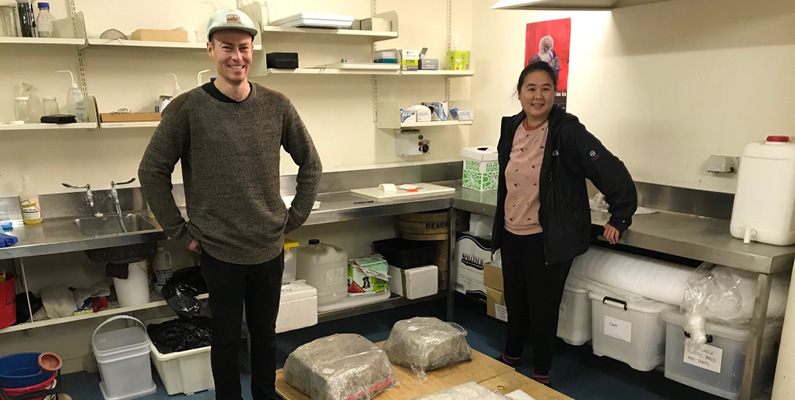 On Friday 10 May, Otago Museum and University of Otago staff successfully removed six of the seven moa footprints discovered in the Kye Burn river by local tractor driver Michael Johnston.

Many questions have arisen around this work so here we attempt to provide some answers.

Why were the footprints removed from the river?

The Otago Museum considered all available options before making the decision to remove the footprints. The first consideration was could the prints be protected if we left them in the river? Unfortunately, due to the location of the footprints and the hydrology of the Kye Burn river, this was not possible. The Kye Burn is a major river course with a large catchment area. The river is prone to very high flood flows that occur at least annually and the footprints were located in the scour zone of a meander. During flood events, the prints would be in the path of oncoming debris swept down the river, and at risk of damage.

Ironically, it was likely a flood event that originally uncovered the prints from the clay bank because the substrate containing the prints is slightly harder than the surrounding clay. We were concerned that another high flow event would destroy them in the same manner that exposed them. Because of the time of the year, we thought it necessary to try and extract the prints as soon as possible, before any large winter or spring rain events.

We did not take this decision lightly but due to the significance of these prints to New Zealand, we deemed it necessary to attempt to protect this find by removing the prints.

Did you need to obtain permission to remove the prints?

Once we had decided that the only way to protect these significant taoka was by removal, we sought permission from local iwi and talked through our plans for how we could protect the footprints. They were as excited as we were about the find and were keen for us to protect the prints by extracting them from the river.

The process of arranging the correct permissions took more than two months. This was because there were many permissions that needed to be arranged from many different parties including iwi, landowners, leaseholders, the Ministry of Culture and Heritage, Land Information New Zealand, and the Otago Regional Council. We would like to thank these organisations for realising the significance of the discovery and for helping us as quickly as possible.

Once we had permission, resource consent and water permits for our temporary diversion, we needed to find a date when the Kye Burn river would be low enough for us to do our work and good weather was forecast. Permission was received on 17 April and 8 May presented the first suitable weather window, and the availability of a contactor and the team from the University of Otago’s Department of Geology.

We worked with Parker Earthworks, a local contracting company from Patearoa and the project would not have been successful without their enthusiastic help. Iwi and locals were present throughout the three days of extraction, and their support and enthusiasm remained consistent throughout.

How did you remove the prints?

Day one of the work started early on Wednesday 8 May and involved creating a temporary diversion around the swimming hole containing the prints. This consisted of almost eight hours of excavation work and the set-up of a silt trap to reduce the sediment flow downstream. During this time we made sure that any fish found in the stream were removed from the site and safely released 100 metres upstream from the work site.

We expected to complete most of the work, including the removal of the prints, on day two (Thursday 9 May) but woke to unforecast rain. Once on site, kaumatua Hinerangi Ferrall-Heath began our day with a karakia to keep the prints and us safe while we went about the work to remove the moa footprints. It proceeded to rain all day, both on site and in the surrounding catchment. Pumping around the prints took all day due to increases in the river level and flow rates. We managed to empty the hole right before dark but there wasn’t enough time to extract the prints.

Day three started at 7am by pumping the hole again. The pump was beginning to show signs of breaking down and required careful attention all day. The extraction began by taking photos for 3D photogrammetry of the overall site so that we can easily and accurately reconstruct the position of each footprint as it was in the stream. Following that, Professor Ewan Fordyce began to cut the clay slab into smaller, manageable pieces.

Why were the footprints removed separately?

The decision not to take the whole slab as one piece was another careful decision by Museum staff and the team from Department of Geology. The clay formation containing the footprints was approximately 20 cm thick and saturated with water, making it heavy and friable. We did not believe that we could lift the entire slab without it breaking, and once back at the Museum this would have made movement of the slab, storage, drying, preservation and display very challenging. Furthermore, the prints within the clay would have acted as weak points where breakage could occur.

The clay was cut into slabs that could be lifted by two to four people – this made each footprint its own unit and made them easy to lift from the stream bed. The cuts were made with a masonry saw and a chainsaw with a tungsten carbide chain. These tools were chosen because they are efficient and quick. However, they’re not designed for this style of work so required lots of on-site maintenance to ensure they worked well.

Dan Parker, the contractor, and Marcus Richards from the Department of Geology removed the sixth print from the stream right as the mechanical seal on the pump failed for the final time.

We made a decision to leave the seventh print in the stream because of its inaccessibility. Removal would have involved excavating a large portion of the surrounding bank. This print is also highly damaged and pitted from the root mass that has been growing on top of it. Scientifically, it would not have added much to the set of prints that we have managed to extract. It is nice to think that there is still more in the Kye Burn for people to keep an eye on.

How will the prints be cared for now they’ve been removed?

Once all the prints were extracted, they were wrapped to keep them moist and prevent rapid drying of the clay. They are now back at the Museum and will undergo conservation treatment by our team to ensure their long-term stability. We do not know exactly how long this will take but it is likely to be several months. Once they are able to be safely displayed, we will organise a hui for all those involved in the project, and then aim to display them for the public.

How old are the prints?

The age of these prints is hard to determine and we will need to carry out research in order to narrow it down. We do know that the sediments they are contained in are from either the Swinburn or the Wedderburn formations, which gives the sediment a date range of between 1 and 11 million years old.

We look forward to continuing our relationship with the people of Kye Burn/Maniototo and iwi, as we act as kaitiaki of the footprints on their behalf and on the behalf of all the people of Otago and New Zealand.

This has been an amazing project and one for the history books.