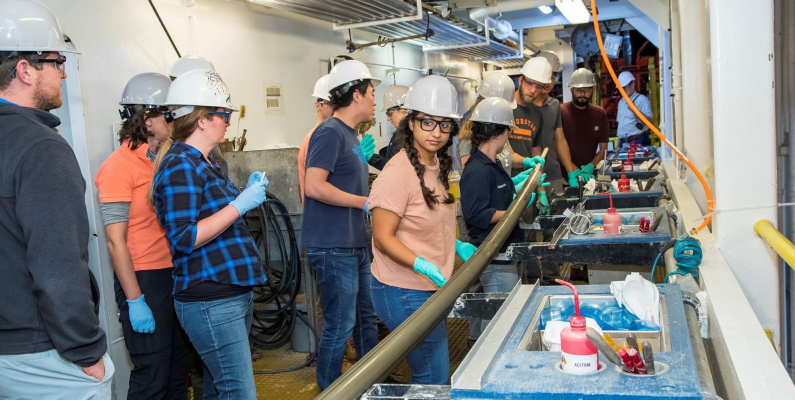 What will we get when we drill down? Well, the scientists on board talk about sediment, mud, clay, ooze, sand, ash, chert (a hard type of flinty rock you get when some microfossils change under pressure, apparently nobody likes chert because it is hard to drill), and rock. Seabed floor sediment can be made up of a few different things – skeletons of tiny marine life that were once alive, but then died and drifted to the sea floor, bits of rock, dirt and sand that has washed off the land and out into the ocean, cosmic dust which has come from space, and mineral rich particles that precipitate from seawater on the ocean floor. Each of these types of sediment can tell us something about what was going on with the Earth around the time that they are laid down on the seafloor. The deeper the sediment, the older it is. So a nicely recovered core gives us nice sequential layers going back in time.

I say drill down, but to recover these sediments, the first thing that we will try is called an Advanced Piston Core (referred to as APC, because, acronym town) which is essentially a sharp edged cylinder that gets fired at the seabed floor using hydraulic pressure. The most commonly used analogy for this kind of drilling is sticking a straw through a layered cake and taking back out a sample of all the layers. 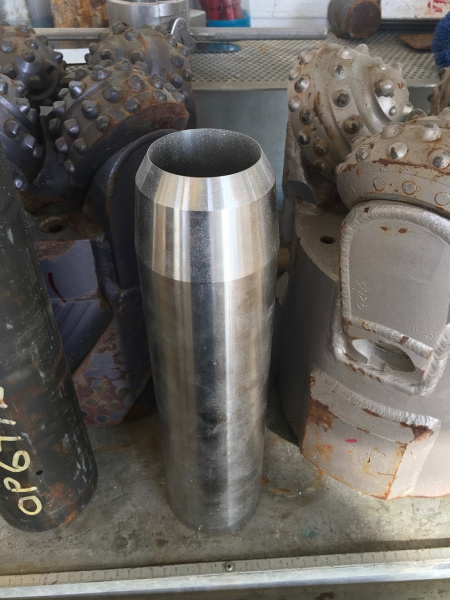 To use the APC, the team will lower drill pipe to the sea floor and then use a wire to lower the APC down through the drill pipe. The APC is attached to a 10m empty plastic core liner, a cylindrical tube of 66 mm diameter that will collect the sediment. So the whole thing is lowered to the seabed and then the hydraulic pressure is ramped up so that the APC is shot into the sediments below. The core sample is pulled up by the wire, the drill pipe drops down the 10 m, and then the process is repeated.

If you think about how this works, the APC is very good for collecting the soft type of sediments, which are generally what you get at the top. Mud, clay and ooze are all good for APC. The APC gives the best looking core, so that is the first go-to of any seabed core sediment driller, until the sediment gets stiffer and it starts to struggle. When things start to get tougher they bring out hardier looking pieces of kit. The extended core barrel, or XCB, has intimidating sharp bits and tungsten teeth that rotate to chew up the tougher sediments on the outside, while the sample gets collected in the extended cylinder. The rotary core barrel or RCB just munches up the hard sediment or rock on the outside with the sample collected in the centre. 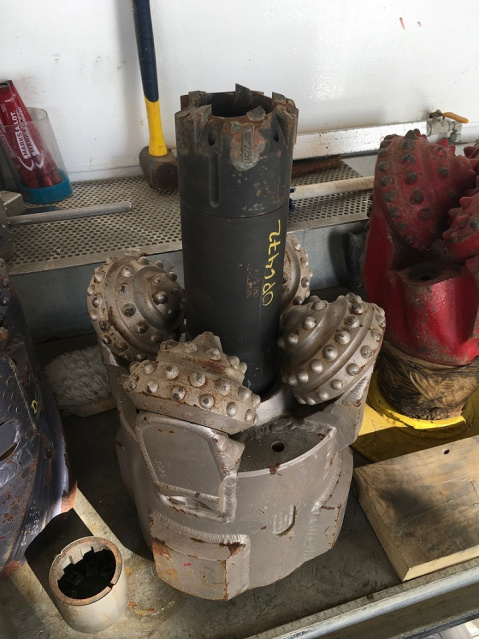 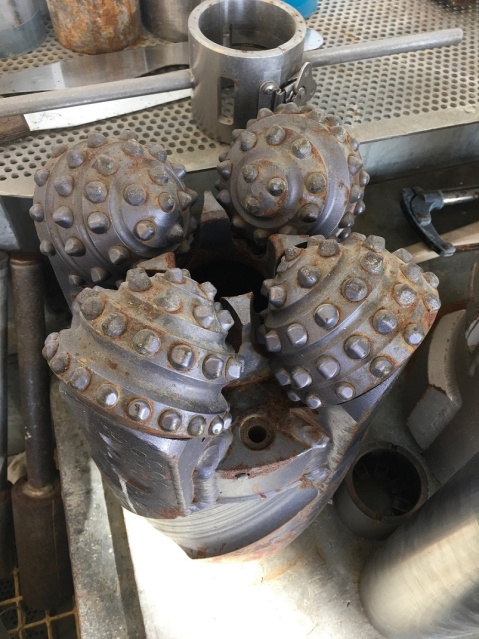 Image: When the going gets tough, the XCB (left) and RCB (right) get going. By Claire Concannon © Otago Museum

Because they are rougher on the tough sediment and rock, using these kinds of drill bits can result in patchy cores, where some pieces of the record are missing. Part of our expedition actually involves re-drilling a site that was first drilled 47 years ago. Back then they only used these hardy bits of drill machinery, they didn’t have the APC, so we are hoping to get a better record of the sediments in this site using the latest and greatest in drilling tech. We are almost on-site now and people are getting really, really excited. Fingers crossed for soft sediments, no chert, and happy drilling!

Top Image: Sediment cores of about 9 m long in a plastic liner are brought up from the drill floor and then carried to the ‘catwalk’ to be chopped into more manageable 1.5m segments. © IODP.