In the belly of a trout

home > Otago Museum Blog > In the belly of a trout

A couple of keen outdoors men, Ray Webb and Terry Arthur, touch base with the Natural Science team semi-regularly; we enjoy hearing about their adventures in wild places around Otago.

Last year they had a successful day brown trout fishing at Loganburn Reservoir, part of the upper tributary of the Taieri River, high in the Lammermoor Range. Terry bagged a five pound (2.2 kg) brown trout, and as they gutted and prepared the fish they found some interesting stomach contents. 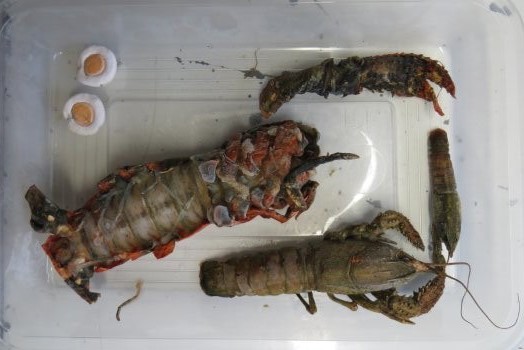 The trout had recently made a meal of at least two large freshwater crayfish – southern kōura (Paranephrops zealandicus). But it wasn’t the presence of the kōura that surprised Ray and Terry; they had seen crayfish inside trout bellies before. Trout are a major predator of freshwater kōura.

What had hooked Terry and Ray’s curiosity was the two little “poached quail egg-looking things” and they wrote to ask what these were, suspecting they had something to do with the crayfish rather than the trout.

Their suspicions were correct. These white dome button-shaped objects are a type of gastrolith found inside freshwater crayfish.

Kōura exoskeletons are made primarily of chitin and calcium carbonate, and the latter gives the shells their toughness. For kōura to grow larger, they must moult their tight older shells. A new soft exoskeleton one-size larger grows underneath and requires calcium carbonate to harden once the old one has been lost. Freshwater environments have low levels of dissolved calcium in the water, and kōura form gastroliths in their heads to store reserves of calcium carbonate in the lead-up to a moult.

Video: Ottdurr | YouTube | 4 November 2014. A white gastrolith can be seen through the translucent shell behind the eye.

There have been previous reports of freshwater kōura gastroliths showing up in the stomach contents of trout and shags. Vulnerable during their moult event, ‘soft shell’ kōura would make easy pickings.

Kōura are endemic to New Zealand, and shortfin and longfin eels are their natural predators. The eel’s skin mucus has a chemical cue that kōura can detect then avoid the eel by hiding. They are not able to detect trout in the same way, which makes them an easy target for these introduced predators.

In New Zealand’s freshwater ecosystems, trout are tenacious and opportunistic predators. They feed on native fish – young eels, galaxiid (whitebait) species and bullies, as well as invertebrates like water snails and insects. There are even reports of mice being found in trout’s bellies!

Happy trout fishing when the season kicks off this week!