Leopard seal pup to be added to Otago Museum collection 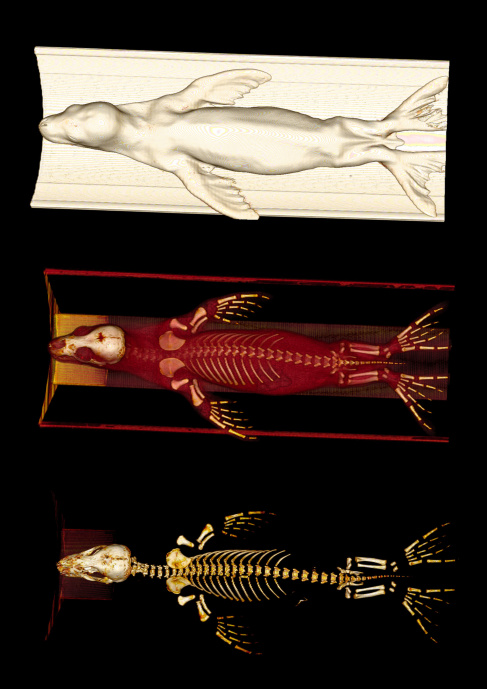 A leopard seal pup which was born and died at St Kilda Beach, Dunedin, on 26 September 2017, is about to be taxidermied and eventually put on display at Otago Museum.

Peter Wells, who has been contracted to undertake the work, is one of New Zealand’s leading bird and fish taxidermists. Wells is visiting from Blenheim to complete the initial preparation work, and will then return to his workshop where the seal pup’s skin will be tanned, treated and fitted to a custom-made mount to complete the taxidermy.

Leopard seals normally give birth on the inaccessible pack ice of Antarctica which makes the birth of the St Kilda Beach pup such an unusual event, and although the outcome was sad, it provided an opportunity for research to better understand this species.

The pup has already undergone a full series of imaging using MRI and CT scanning, making it the world’s most imaged seal. This has revealed an amazing amount of detail already about the early life stages of this species, such as how well-developed the teeth of this Antarctic predator are at birth. The scans also revealed that the lungs were full of fluid, affecting the pup's ability to breath. The Department of Conservation's decision to euthanise the pup after it was abandoned by its mother prevented its suffering.

Following the work by the taxidermist, visiting leopard seal researcher Dr Krista Hupman (NIWA) will be overseeing the detailed necropsy of the remains, along with local marine mammologist Dr Carolina Loch, assisted by the Museum staff.

The proposal to preserve the pup's remains has been supported by Te Rūnganga o Ōtākou.

The leopard seal pup is not the only taxidermy project undertaken recently – an eclectic flock of birds has come home to roost at the Otago Museum. These new taxidermy mounts and research skins have been completed for the natural science collection.

Some of the new bird species will be familiar to visitors, others are less well known. Birds that the public perceive as common, like the red-billed gull, can be rare in museum collections.

Despite the eastern rosella reportedly being introduced to Dunedin in 1910, this will be the first Dunedin-collected example in the collection. The plan is to add these new birds to the urban garden display in the Nature gallery.

A pair of flesh-footed shearwaters were specifically requested for preservation from a research programme using birds salvaged from fishing bycatch. Another open-ocean species in these new additions is a juvenile Buller’s mollymawk that had lost its way and was blown inland and found at Roxburgh, Central Otago.

Dead birds are often brought to the Museum by members of the public and wildlife management agencies like the Department of Conservation. Often these are birds that have died after flying into windows or have been washed up on beaches after storms. Decisions about how the local bird species are used for cultural, educational and research purposes are made by representatives of the Komiti Taoka Tuku Iho.