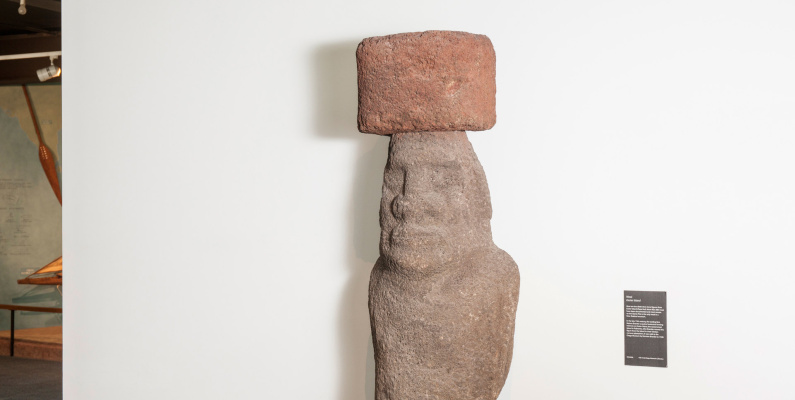 Please allow us to introduce you to the only moai in New Zealand.

He’s not quite as tall as some, but at nearly two metres, he makes an impressive sentinel for the Pacific Cultures gallery.

Moai are from Rapa Nui (Easter Island), the most remote island to have been inhabited by humans. They are thought to represent the living faces of ancestral chiefs, whom the people of Rapa Nui believed were descendants of the gods. These ancestors were tasked with offering protection in this life and the next, increasing fertility, guarding personal property and ensuring there was enough food to eat.

Moai usually show the upper part of a male body standing upright and facing forward. Some moai, including ours, wear a cylindrical headdress called a pukao. Made of red stone, pukao were carved at a different quarry from the moai, known as Puna Pau.

White coral eyes with obsidian or red scoria (a kind of basaltic rock) pupils were inserted into moai’s eye sockets during ceremonies to draw upon the ancestors’ mana or spiritual power.

Moai are usually between two and 10m tall and weigh up to 83,000kg. One of the unfinished moai found at Rano Raraku, however, is 20m tall!

It is thought at least 800 moai were carved at the Rano Raraku crater between the 11th and 16th centuries. The volcanic rock was carved out using picks and basalt hammer stones.

When the moai were completed, they were moved to an ahu (stone platform). There is much debate over how this was achieved. Some have suggested a rope and pulley system. My personal favourite, however, is the legend that the statues walked themselves into place!

Carved from a heavy volcanic stone called trachyte, we think our moai was removed from Rapa Nui in the late 1800s. The Museum purchased it from the Brander family in 1928.