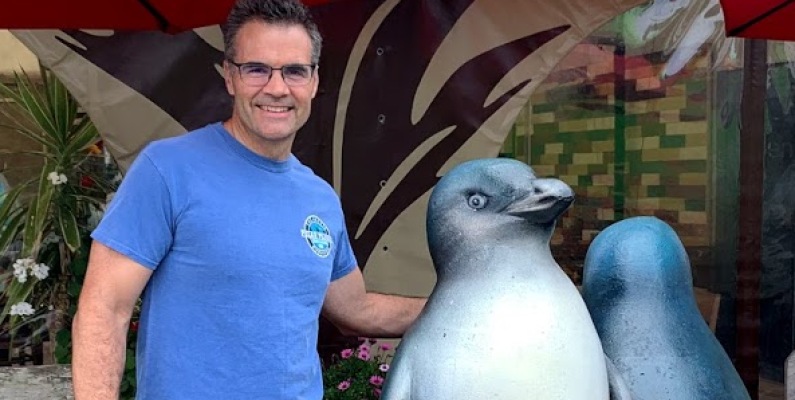 The Otago Museum is a busy place, with over 350,000 people through our doors in the last year. A number of these visitors are researchers who have requested access to our world-class collection of 1.5 million+ objects to support their studies.

These researchers are doing really interesting things, and are often accessing items in our collections that aren't on public display, so we want to share some of their visits to provide another insight into what a behind-the-scenes day at the Museum looks like.

Meet one of our researchers, Peter Hadden, a University of Auckland postgraduate student. Make sure you keep an eye out for further Q & A sessions here on the blog over the next few months too... Enjoy!

I am a part-time postgraduate student in Auckland at the University of Auckland, Department of Ophthalmology, and also a practising ophthalmologist (eye surgeon) in Auckland. I am trying to better understand how penguins see and what they can see, in the hope that this can lead to some positive outcomes for these very cute animals, some of which are highly endangered.

Tell us about your visit

I am looking at bones from the eyes and skulls of lots of different penguin species, taking them back to our bioengineering facility to measure, photograph and scan them, to see how they are made and how the anatomy differs between different penguin species. I am also trying to determine what living penguins can see. I first came to visit the Otago Museum last year and was impressed with the number and range of penguin bones that have been carefully cleaned, collected and catalogued, including making a record of what species they were from and where they were found. In Auckland, we only have one species, the little penguin, in the wild although we also have two others in SEALIFE Kelly Tarlton’s Aquarium. If you put together the specimens in Otago Museum with those in the aquarium, you have all but one genus of penguin in the world right here in New Zealand to study.

The last two times I have returned to the museum to borrow bones, first from the eye and then from the whole skull, to do the same with the bones from the penguins in the museum’s care. I also hope some time to be able to dissect some of the frozen heads to see what differences there are between different penguin species, which may determine how penguins of different species feed and detect predators.

One penguin even had the talon of another bird stuck in its skull! I hope that this was just from a scavenger that tried to eat a part of the penguin after it died, because if it got attacked like that when it was still alive it would have been very painful. 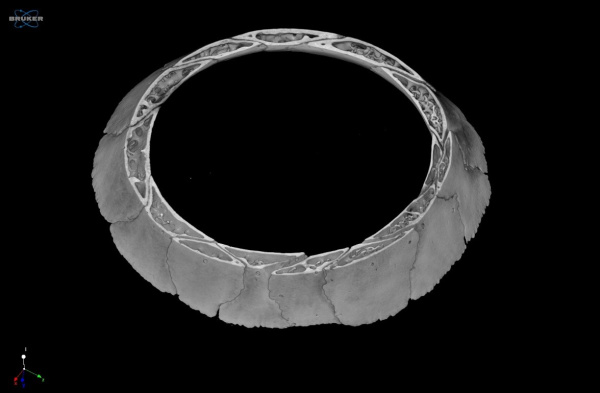 This is a cut away scan through the scleral ring of a Snare’s crested penguin that was in the collection of Otago Museum. Look how the little bones all fit snugly in a cirle and have got little struts within them, possibly to strengthen them and protect the eye as well as hold the eye in a non-spherical shape to enable better vision underwater.

Otago and Southland are home to many more species of penguin than live near my home in Auckland, including some rare species such as the yellow-eyed, hoiho or tarakaka penguin (Megadyptes antipodes) as well as several species of crested penguins. It is also the only place in New Zealand where some of what we used to think were New Zealand little penguins, korora (Eudyptula minor), are actually not New Zealanders but rather recent immigrants from Australia and should be called fairy penguins, Eudyptula novaehollandiae. Australians are particularly likely to be found around the Otago Peninsula. In fact, more different species of penguin breed in southern New Zealand and it’s islands than on the Antarctic continent!

For many years researchers have been collecting penguins that have died on these southern shores, carefully storing their bodies and bones at the Otago Museum, and it now has the most diverse range of extant penguins in New Zealand in its care. It was also the home of John Darby, now retired, who got me interested in penguins in the first place and, although I grew up wandering around Auckland Museum and still love that place, I think Otago Museum is certainly one of the best if not the best museum in New Zealand to explore and I love seeing what else there is in the collection. The most recent time I visited it had an amazing exhibition of dinosaurs and you could see the same eye bones that penguins have in some of those dinosaurs. Most people don’t know that birds, including penguins, actually are also dinosaurs! 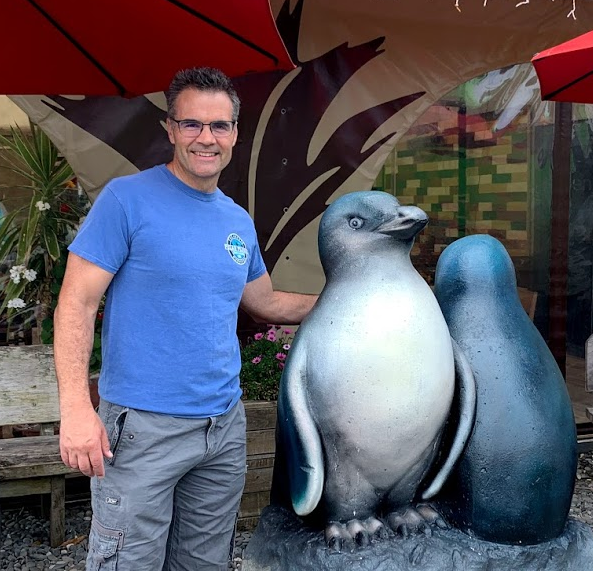 I like penguin statues almost as much as real penguins!

What do you hope to achieve from your research visit here?

I am trying to determine how and what penguins see, so that we can understand in what environments they might do well and what might threaten them. For instance, can they see a fishing line if it is thin and off to the side? Could they see it better if it was painted red? Understanding their head and ocular anatomy will also help us determine whether an injured penguin is able to be released back into the wild.

From the Otago Museum, we have borrowed bones of some of the rarest and most endangered penguins and are trying to determine what the little bones that are found in their eyes are used for. We also hope to use the shape of the skull and the bones that are around their eyes to figure out in what directions they can see and how much protection they afford to the eye.

Why do you love science, or in your case, zoology?

I love learning about the eye and how we see because I think that vision is the most important sense that we have. Learning about how other animal see is really fascinating because it makes you think more about how and what you see, and it also helps care for these loveable creatures. Penguins are also very cute and working with them to see what they see is lots of fun.

Somehow also people have gotten to know that I like looking at penguin eyes so now at Auckland Zoo I have been asked to look at the eyes of tuatara, kaka and takahe. If I hadn’t gotten interested in penguins and started to study their anatomy then I would have never got the opportunity to see some of these other amazing animals close up. Many of them have never had their eyes studied and if you don’t know what they’re supposed to look like or do then we’ll never be able to figure out if animals with eye injuries can be let back into the wild safely. 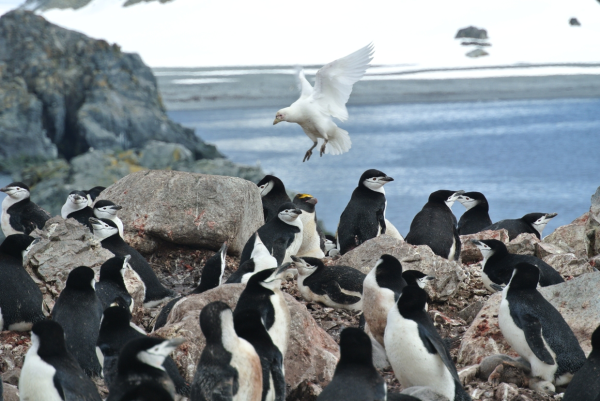 Can the penguin see the bird that might be trying to steal it’s egg? Maybe not, because unlike some birds such as the duck, the top of the skull covers the eye, so unless it looks up it doesn’t see what’s coming..