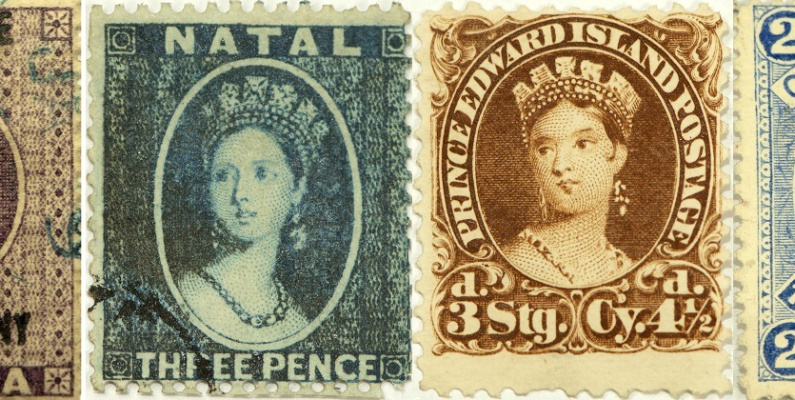 The world’s first postage stamps, which were the result of work by Rowland Hill and several others, went on sale on 1 May, 1840 in England.  The penny black and twopenny blue were valid for postage on 6 May and the penny black was replaced with the penny red in 1841. The simple rectangle bearing a profile of Queen Victoria, then 21 years of age, was chosen from more than 2000 entries to the Treasury design competition.

Fifty years later in 1887, the same side-face profile appeared on 14 stamps issued to commemorate the Golden Jubilee of Queen Victoria, marking the queen’s reign and her accreditation as the Empress of India.  All of Great Britain’s 82 postage stamps issued during the 61-year reign of Queen Victoria showed her as a 19-year-old, only the frames around the portrait showed variations, and the colours were mostly drab.

A surprising advertisement appeared in the London Times in 1841: “A young lady being desirous of covering her dressing room with cancelled postage stamps invites the assistance of strangers in her project.”   Was this person the first stamp collector with three stamps only for wallpaper?

There were several variations in the stamps issued by the countries of the British Empire during the Victorian era.  New Zealand’s first postage stamps were issued in 1855 and their design was based on the 1837 portrait of Queen Victoria in her Robe of State by Alfred Edward Chalon which shows the queen facing the viewer, or full-face in philatelic terms. The colours ranged from yellow and red, through to brown, and orange and green, to lilac and blue and were bright and attractive (below).  They were described by a British collector as “the Rembrandt of philately – the most beautiful stamp in the world”.

Image: Three New Zealand full-face queens (the most beautiful stamp in the world) ©

Fifty-one countries and territories of the British Empire issued stamps featuring Queen Victoria and 41 of them issued stamps showing the young queen. Examples of full-face stamps from four of these countries are shown below.

The Victorian stamps from Canada showed the greatest variety of design, ranging from young side-faces looking to the right and to the left and young full-faces, to a Jubilee 1887 issue with one stamp showing a young and aging queen and several others with aging side-faces (see below).

No official explanation of the lack of variety in the designs of the Great Britain Victorian stamps has been found.