We are using Rippl for contact tracing. You can download it before your visit or use our free wifi.

The Brilliance of Bees

Posted 20 May 19 by Samantha Kingsury

World Bee Day is celebrated on the birthday of Slovenian Anton Janša (born 20 May 1734) to acknowledge his contribution as the pioneer of modern beekeeping. Janša was appointed the first teacher of apiculture in Austria in 1769, and travelled around the country discussing his observations of hive behaviours. He gained immense popularity for his knowledgeable lectures on bees and published two books. He’s also credited with developing the stackable hives still in use today. 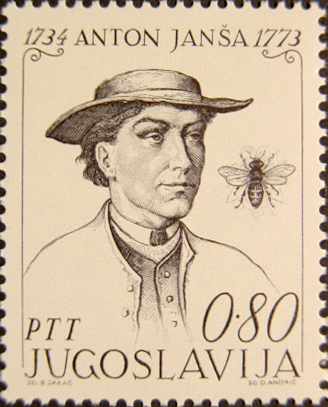 In 1851, Lorenzo Langstroth of Philadelphia added frames to the inside of the hive, preventing bees from making honeycomb on the walls. The invention of what is still called the Langstroth hive is why he is considered the father of American beekeeping.

Hives themselves are not new technology – we’ve been housing bees in hives for millennia, with records dating back to Ancient Egypt and Ancient Greece. Honey approximately 3000 years old has been discovered in the tombs of pharaohs such as Tutankhamun, crystallised but still edible. In fact, some evidence suggests beekeeping practices may have existed for 9000 years, and certainly we’ve been stealing honey from natural hives for that long. Cave paintings from Spain depict people gathering honey from trees and may date back to 10000 BP. 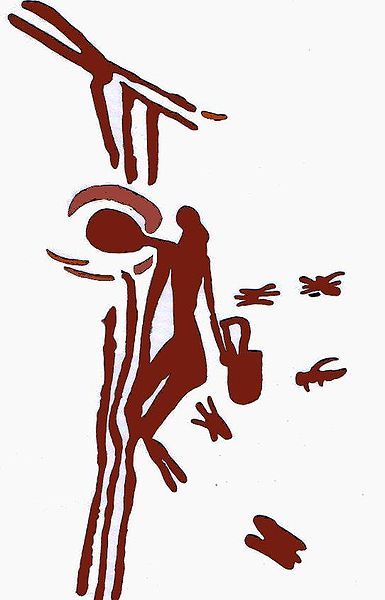 Image: Mesolithic rock painting of a honey hunter harvesting honey and wax from a bees nest in a tree. At Cuevas de la Araña en Bicorp. (Dating around 8000 to 6000 BC). By fr:Utilisateur:Achillea. GNU General Public License.

Bees are a natural poster child for pollinators – they pollinate huge proportions of crops and are crucial members of almost every ecosystem. It is estimated that a third of the human food supply relies on animal pollinators – primarily bees – but also other insects, birds and bats.  While our biggest staple crops like corn, wheat, rice and soybeans need no insect help at all, bees are essential for our most common fruits and vegetables including apples, pears, cherries, kiwifruit and the entire cucurbit family (cucumbers, melons, and gourds).

The western honey bee alone is found on every continent except Antarctica, and all habitats containing insect-pollinated flowering plants have at least one species of bee. The threat of losing bees is not confined to the loss of tasty fruits – it critically jeopardises the biodiversity of our planet. With the disappearance of bees, we’d lose a significant number of flora, and plants and animals relying on these species would suffer as a result. Whole ecosystems would be reduced to a few species, and the lack of diversity would reduce the robustness of the entire planetary ecosystem.

To learn more about bees, pop into the bee garden in Tūhura's Tropical Forest, or visit our pollination website.