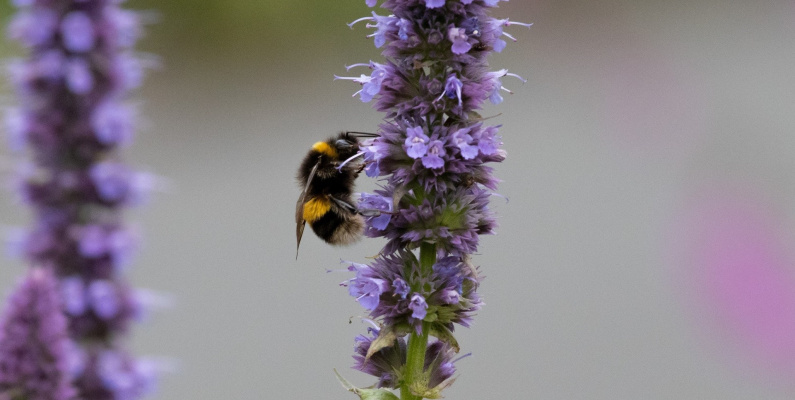 As we are all going to be spending more time in our gardens, let's get to know one of our favourite pollinators a little better with Assistant Curator, Natural Science, Kane Fleury.

These are some of the most iconic of the insect species and are loved by most. Although the thicc girls and boys of the insect pollination world, the bumblebee (Bombus spp.), is thought of by many as too heavy to fly, they are very hard workers and will pollinate many more flowers than its fussy, skinny cousin the honeybee. They can also fly, very well in fact.

They have a stinger that can cause a very painful sting, but has no barbs so the bee will not die after the encounter. When threatened the bumblebee will often clamp its jaws on, hold on with its little feet and inject its stinger multiple times, a very painful experience if you are ever privileged enough to enjoy it.

They are fascinating insects that are very busy and keen to get on with their mahi. 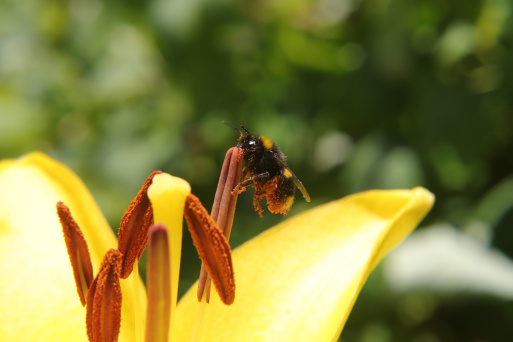 Introduction of the bumblebee

The story of the introduction of the bumblebee to New Zealand starts in 1874 in Christchurch with a sum of 300 pounds being given to the acclimation society to help with the importation of the bumblebees from England. The first successful introduction of bumblebees into New Zealand occurred in Canturbury between 1876 and 1885. They were brought to New Zealand to help with the pollination of red-clover because the humble honey bee tongue is much too short to do this successfully. Red-clover (Fabaceae: Trifolium pratense) was an important pastoral crop and the farmers of the time were struggling with crop pollination and could not afford to import seed stock from England. The bumblebee was brought over on ships to do this task as New Zealand has no native bumblebees or insects that were doing the job. 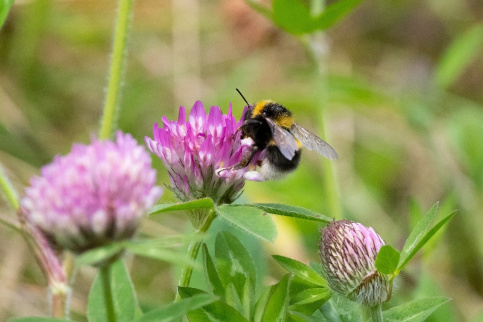 The introduction was one of the first times insects had been transported around the world to pollinate a specific flower. The introduction to New Zealand served its purpose. They were first released around the Canterbury region and the first bees to be introduced were the buff-tailed bumblebee (Bombus terrestris) and the large garden bumblebee (B. ruderatus). They were later also sent to the North Island to help with crop pollination and these two species are now found across the country.

The second introduction was in 1906 and there were at least four species introduced. Included in this later introduction are the two other species of bumblebee still found in New Zealand. The small garden bumblebee (B. hortorum) and the short-haired bumblebee (B. subterraneus). The small garden bumblebee in the South Island is not found west of the southern alps nor further north than Hamilton in the North Island. B. subterraneus is the rarest bumblebee in New Zealand and is found only inland in central Otago and Canterbury.

The total population size of B. subterraneus appears to be decreasing in New Zealand, so if you see one, please photograph it and upload your photos to the iNaturalist website.

Interestingly our Otago Museum collection does not have any of the short-haired bumble species in its collections, so if you see one we would be interested in talking to you.

The bumblebee is very good at pollinating flowers that have long tubular flowers. B. hortorum is one of the most common species, and has the longest tongue length of the species that are found in New Zealand at 12.5mm long. They use their soft tongues to gather nectar from flowers and can often be seen flying around with their tongues still extended.

Bumblebees will also pollinate many other crops such as kiwifruit and tomatoes that other species cannot, providing that they are given a sugar syrup to help sustain them when they are visiting nutritionally poor flowers. They can wear themselves out if they don’t keep their energy levels high. 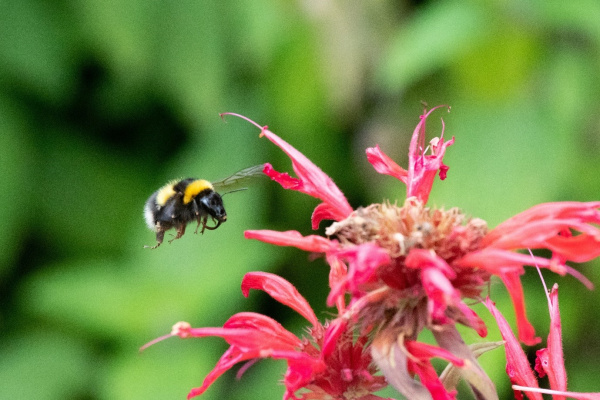 Image: A bumblebee flying about with her tongue out. Image: Kane Fleury © Otago Museum CC-BY 4.0

The bumblebee is a very efficient pollinator of flowers because of the way it interacts with the flower. While visiting flowers, the bumblebee will sit on top of all the pollen-bearing anthers on a flower and buzz. This buzz is created by isolating their wing muscles to quiver their thorax, producing a high-intensity vibration that releases pollen from the flower. This type of pollination is called buzz pollination and honey bees can’t do it. Buzz pollination is critical to the pollination of crops of tomatoes, kiwifruit, potatoes, and eggplant. In these flowers the pollen is stored deep within the anthers and will only fall out when vibrated in just the right way. 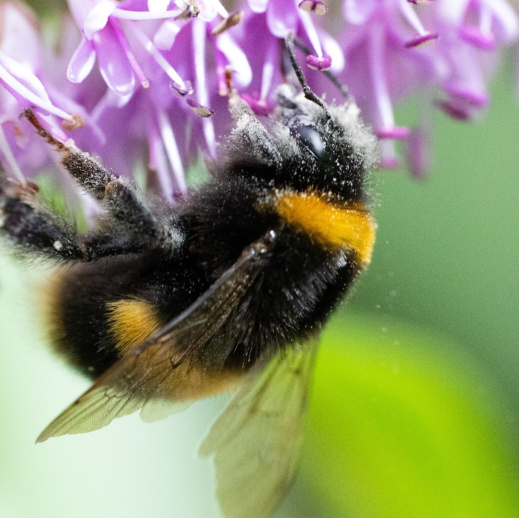 They also use this buzzing to help compact the soil when they are building nests and when threatened by predators. You’ll often hear this buzzing when a bumblebee gets stuck inside a window pane. The buzzing is different to flying, but because they can alternate between buzzing and flying, it is tricky for us to notice the difference when they are feeling threatened on the inside of a window.

As with all introduced species, bumblebees can disadvantage some native plants, which have evolved in partnership with other pollinators or use other pollination strategies.

Sometimes the bumblebee can’t access nectar within a flower it will bite into it to gain the prize. An example of this is the kowhai (Sophora spp.) flower, which is too narrow for the bumblebee to fit in and the tongue of some bumblebees (B. terrestris, for example) is too short to reach the nectar. Because of this B. terrestris will bite into the flower bypassing the stigma robbing the flower of its nectar. This not only bypasses the whole pollination system, but the punctured flowers open the shortcut to other insects, meaning that flower is much less likely to be pollinated (https://newzealandecology.org/nzje/1476.pdf). 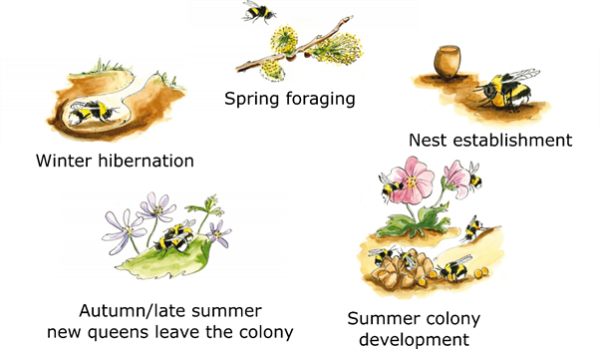 Image: The yearly life cycle of a standard bumblebee. Copyright of and adapted from Bumblebee Conservation Trust www.bumblebeeconservation.org

A bumblebee colony will typically only last one summer. Each spring, the bumblebee lifecycle is re-established by young queens who will start emerging from their burrows where they have spent winter. You will often see a young queen bumblebee during spring fly very low over the ground looking for a suitable nesting site. She is beginning her journey to establish a new colony. She looks for a small, dry, dark hole that contains some plant fibres. Bumblebees will use anything that fits this new home checklist. Nests have been found in old mattresses, compost heaps, mice or insect burrows, and even small spaces in the basements of houses. Nest sites are often in very short supply, a new queen must defend challenges for her nest from other queen bees who might also be on the lookout for prime real estate. Once she has made her selection, she will compact the soil, arrange the fibres, and build a small waxy cup that she will fill with honey to sustain her while she broods her eggs. Bumblebees do not produce large excesses of honey like honey bees do.

She will lay 8 –10 eggs on the pollen ball and will keep her eggs nice and warm until they hatch. In ideal conditions, this will be after 4 – 6 days, then she will put a dab of pheromone on the eggs so that she can find them again in the dark. She will only leave if she needs to get more nectar to fill her little honey pot that she feeds from.

Once the eggs hatch, the emerging bumblebee grubs feast on the protein rich pollen ball and grow larger and larger. After 10 – 20 days the satisfied grubs spin little silk cocoons and transform into pupae. While this happens, the queen will create a second ball of pollen and lays her second clutch of eggs.

The pupa emerge as an adult worker after 11 days, almost a month after being laid. They then take over the hive chores that the queen has been doing on her own til this point. The workers expand the hive, gather nectar to turn into honey and pollen balls for the larvae, and construct new brood cells in the hive, while the founding queen continues to lay eggs.

Once the food stocks in the hive become abundant, usually late summer to mid-autumn, the queen will stop producing broods of workers and will start producing new queens and male drones. Often, the founding queen will die at this point and the new queens and drones will mate and go in search of overwintering spots, which are commonly small holes in the ground. Usually, the parent colony will die out after this as there are no more eggs being laid to replace the worker bumblebees as they die.