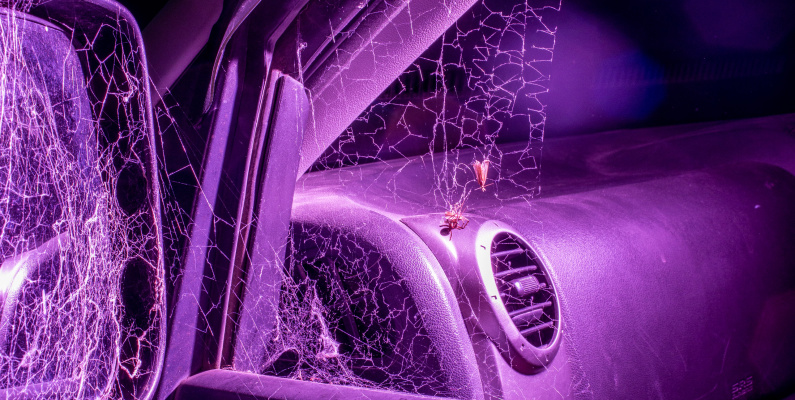 Spiders in mirror are not as creepy as they appear.

"I’ve been riding with sam for almost ten years. He’s been to every climbing crag on the South Island. It might be the longest relationship I’ve ever had,” Anne says with a smile and a nod at the impressive web on her 2003 faded green Subaru Impreza. Side mirror spiders (aka sidey-spideys) have been stowing away on kiwi roadies for decades, but how much do we really know about the most well-travelled arachnids in New Zealand.

Anecdotally, Sidey-Spideys do not enjoy speeds over 110kph, and tend to inhabit older, slower vehicles driven by dirt-bag climbers, ski bums, fishermen on a budget and homeless surfers. Formally, according to Emma Burns, curator of the Natural Science at Otago Museum, Sidey-Spideys, with their identifiable ladder-like zig-zag webs, are actually Badumna sp., or common grey/black house spiders.

Given their love of travel and bumming rides, it should come as no surprise that Badumna sp. were introduced from Australia in the early 20th century. They got here either by hitching a ride with some unsuspecting colonist, or by “ballooning”, which sounds alarming if the idea of flying spiders unsettles you. Which it should. The wing mirror serves as a perfect habitat for the little grey/blacks, with protection from predators, easy meals and daily condensation to wash down their kill. House spiders live for up to two years, which I’m sorry to say means Anne is most likely riding with Sam’s great, great grandkids at this point.

“Sidey-Spidey does not enjoy speeds over 110kph, and tends to inhabit older, slower vehicles driven by dirt-bag climbers”

It is true the webs can get a bit thick and inhibit your driving from time to time (what a tangled web they weave when they practice to deceive). But before you do anything drastic, think of all the sandflies Sidey-Spidey has saved you from while you were trying to sleep in your hot car with the windows down. This precarious arrangement might be the only symbiotic relationship between insect/arachnid and humans in New Zealand.

So show some gratitude, and if you must, gently sweep the web to one side.

(Side mirror note: Don’t overfeed your spiders. “Charlie”, who lives in the 1964 delivery vehicle, was fed several moths for the photoshoot and this has led to over-prolific web growth.)