New Zealand, but not as we know it!

home > Otago Museum Blog > New Zealand, but not as we know it! 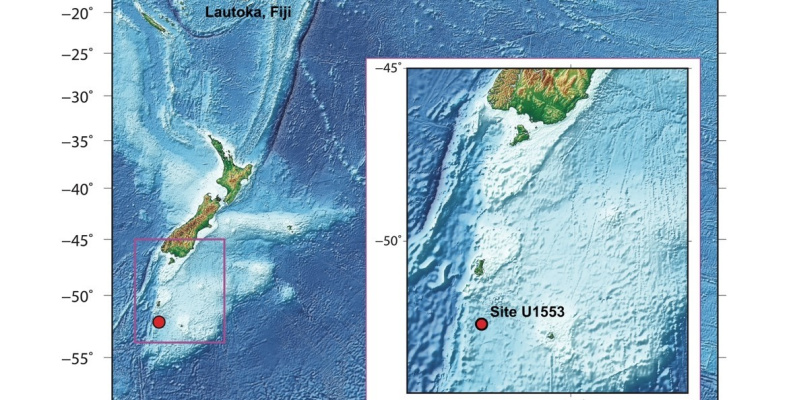 Blog Post Nine –  New Zealand, but not as we know it!

It is very easy to think of things like countries and landmarks and mountains and islands as being permanent, reliable objects, always likely to be there to reference from. But when you start thinking in geological time you realise that this is not the case.

We are surrounded by ocean, 150 km from the Subantarctic Auckland Island to our North and 195 km from Campbell Island to our East, around 778 km from Dunedin. Our drill site (U1553) is on the Campbell Plateau, near a South West edge of the mostly submerged continent of Te Riu-a-Maui, Zealandia. We are at 52o south latitude, and the water here is 1214 m deep (deep, but also pretty shallow in terms of the Pacific Ocean!).

But it was not always so…

Step back in time with me to 180 million years ago. It is the Jurassic period (yayy dinosaurs!) and the supercontinent Gondwana is beginning to break apart. The ‘leftovers’ of Gondwana today include South America, Africa, Antarctica, the Indian subcontinent, Arabia, and New Zealand, so it was a biggie. We know that New Zealand was once part of the gang because of shared fossils across these continents, for example leaf fossils of the tree Glossopteris (some of which have been found in Productus Creek in Southland). Gondwana sat very far south, straddling the South Pole and as it started to break up, parts of it drifted north, including a piece that would eventually become Aotearoa New Zealand.

Fast forward to about 80 million years ago, and what landmass there was of New Zealand finally separated from Australia, in its last phase of the long Gondwana break up, and began drifting off into the Pacific. It would have been much further south at this time, about 80o South, but the climate was warmer and wetter than today (there were trees in Antarctica rather than ice!). This is the beginning of New Zealand’s very own experiment in evolution, which has produced the amazing diversity of endemic species of birds, insects, plants, and fish that the county has today, and a few others surprises on the way.

Moving towards the end of the Cretaceous period we’ve reached 66 million years ago, and, if you’ve been paying attention to time, you know what’s coming next. A giant meteor hits the Yucatan Peninsula in Mexico and the fall out effects cause a mass extinction. Not just dinosaurs become extinct, but a whole raft of other plants and animals too. But some survive, the mass extinction has created opportunity for them, there are more niches to fill and new life forms evolve. This is where things really get going in New Zealand in terms of unique evolution. During the Paleocene (66 – 56 million years ago) Zealandia is largely covered by shallow seas with low-lying land and swamp, and, as we’ve recently discovered, there are cool giant penguins as tall as humans. 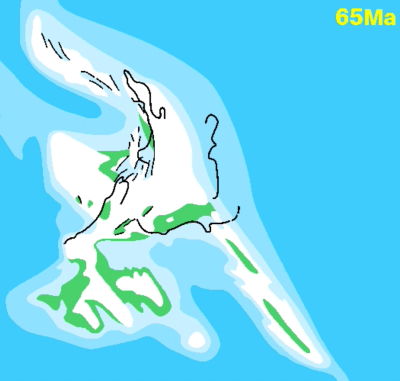 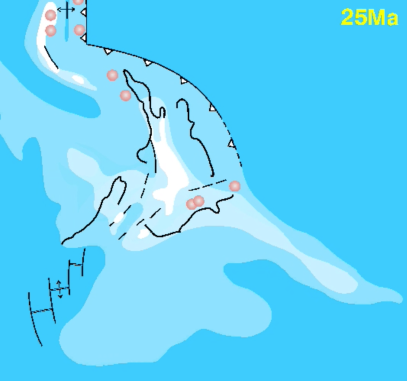 During the Eocene (56 – 33.9 million years ago) things get tectonic. The western half of Zealandia, along with Australia, form the Australian Plate, creating a new plate boundary within Zealandia between the Australian and Pacific plates. New Zealand was low lying and swampy. As an aside, this is the time period during which something crawls off the land and back into the sea that will eventually give rise to dolphins and whales (the evolution of which can be seen in Waitaki Valley fossils – early dolphin and whale designs found in limestone that date back to the Oligocene).

As we move from the Eocene to the Oligocene epoch (33.9 to 23 million years ago) there is a global cooling. The timing coincides with the opening of The Drake Passage (the gap between South America and Antarctica) and the start of the Antarctic Circumpolar Current, so this is a major theory for the cause.  Sea surface temperatures cool by several degrees, and we begin to see glaciation – permanent ice, in Antarctica. During this time, towards the end of the Oligocene, most (but almost certainly not all!) of New Zealand was submerged, leaving a smattering of islands, dubbed Moa’s arks. 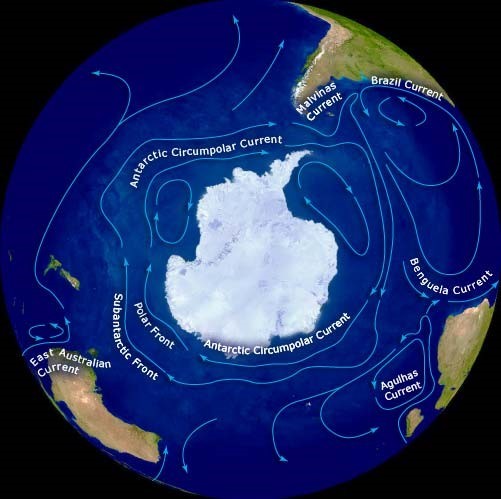 Image: The Antarctic Circumpolar Current, potentially the cause of rapid cooling in the Eocene-Oligocene transition. Image from: https://teara.govt.nz/en/map/5915/circumpolar-currents

So, over this period of 43 million years, the period of time we are recovering sediment cores from, proto New Zealand rises and sinks and rises again, it comes under tectonic pressure, it shifts west and then east, and it continues to drift north.

What this means, is that as the scientists analyse the sediments that they recover off the Campbell Plateau today, they also have to think back as to where that site would have been when the sediments were being laid down – what latitude was it at, how deep was the water then, how close was the site to land at different times? Some of these questions the sediment recovered will help us to answer. Do we recover microscopic animals that like to live in deep sea water or shallow water? Do we see specific pollen or terrestrial plant remains? What kind of rocks and minerals do we find? But for these answers we will have to wait for further study after the ‘sample party’, a special kind of party that only paleogeologists get invited to… More on that next blog.

*If you are in Dunedin I would recommend heading to the Southern Land Southern People gallery in Otago Museum, and track the progression of the Southern part of the South Island of New Zealand through time following the splitting of Gondwana.

Top Image: Our drill site, U1553, hanging at the edge of the Zealandia continent. Image: Laurel Childress, IODP