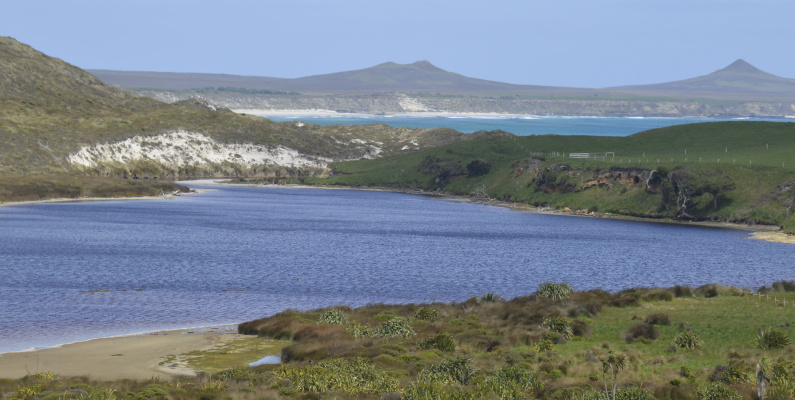 Lake Waikauia in the north of Rēkohu. Photo by Travis Ingram.

Ngā mihi o te tau hou! I’m thrilled to welcome the new year on Rēkohu/Wharekauri/Chatham Island and to show you some of the lakes we have visited on the island. Rēkohu’s lakes and streams are an oasis for native fishes which have adapted to the unique habitats on the island. Local landowners have generously allowed us to access many locations where native fish are abundant and easy to study.

Rēkohu’s unique geological history makes it a perfect natural laboratory for studying populations of plants, birds, insects, and fish that have become geographically isolated. Most of these species arrived from mainland New Zealand, and many of them have differentiated enough to be described as Chatham Islands endemics. The biodiversity of the island also includes plants and animals that made their way to Rēkohu more recently by human introduction, and oceanic species that live and migrate throughout the South Pacific. 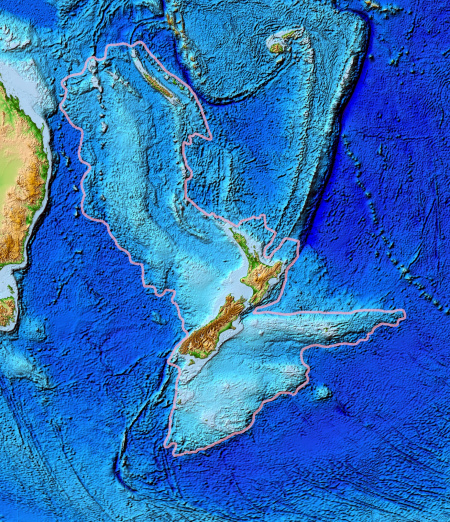 Rēkohu is situated about 800 kilometres east of Christchurch at the eastern edge of Te Riu-a-Māui, the recently named Zealandia continent. Geologists believe Rēkohu’s present landmass emerged about 2.5 million years ago from volcanic activity and tectonic uplift of basement rocks that can be seen on the island as exposed Chatham Island schist. The dominant feature of Rēkohu is the large lagoon, Te Whanga, that makes up the interior of the anvil-shaped island. 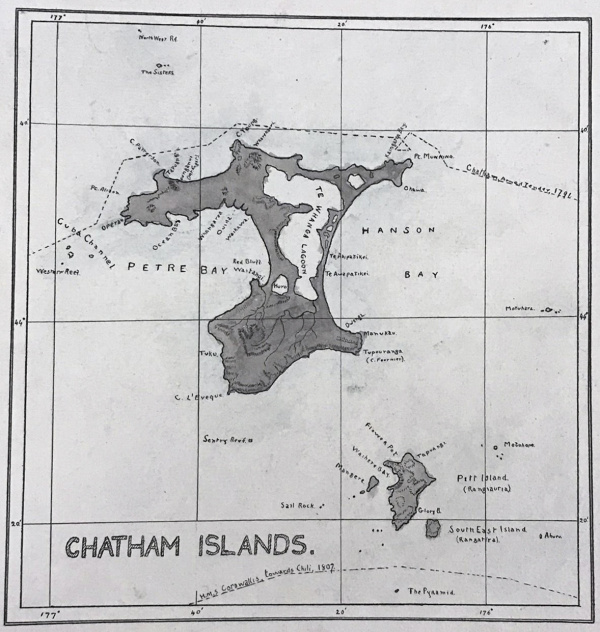 The western shore of Te Whanga displays exposed limestone outcrops, some of which contain fossil shark teeth and kina spines that regularly erode from the rock. The lagoon goes through periods as a closed system, then periodically becoming connected to the surrounding ocean at Te Awapatiki when the channel breaks through the sandbar. The salinity of the lagoon changes depending on the balance between freshwater flowing off the land and saltwater coming through the channel. I have spotted jellies swimming on the lagoon’s edge when the channel through the sand spit was reported to be open. 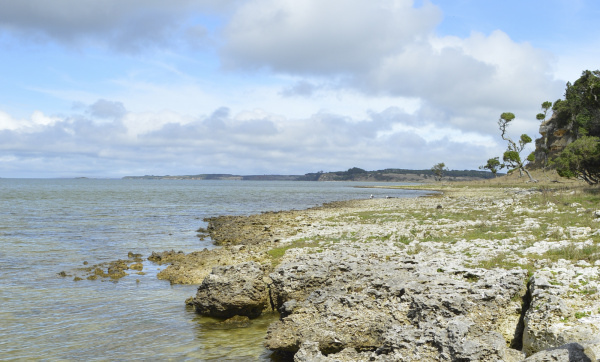 The northeast and central part of the island are ringed by large sand dunes that formed in the last 5000 years. Shallow dune lakes or bays form where water collects in the valleys between sand and vegetation. As sand dunes build up along the shore and close the connection to the ocean, these can become freshwater lakes. Fish populations that live in these dune lakes are the main focus of research that has brought myself, my partner, and some of his students to Rēkohu since 2019. 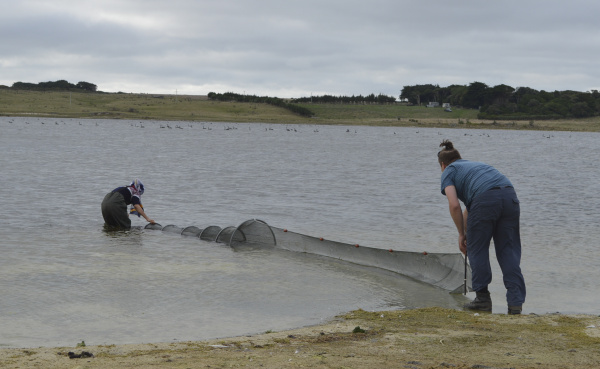 Image: Setting a fyke net on Lake Marakapia, a freshwater dune lake on Rēkohu. Photo by On Lee Lau.

A few dune lakes have at least a seasonal connection back to the ocean, so they are examples of brackish lakes that between a tenth and a third of the salinity of sea water. These saltwater-influenced lakes support a different composition of invertebrates from pure freshwater lakes, and they are often home to native tuna (shortfin and longfin eels).

Image: Lake Pateriki, a brackish dune lake in the northeast of Rēkohu. Photo by On Lee Lau.

In the south and northwest of the island, volcanic activity has influenced the environment which tends to be dominated by peat made of accumulated layers of rushes and Dracophyllum trees. Peat lakes can form when peat layers collapse (due to fire or other factors) and the basin gradually fills with dark tea coloured water. 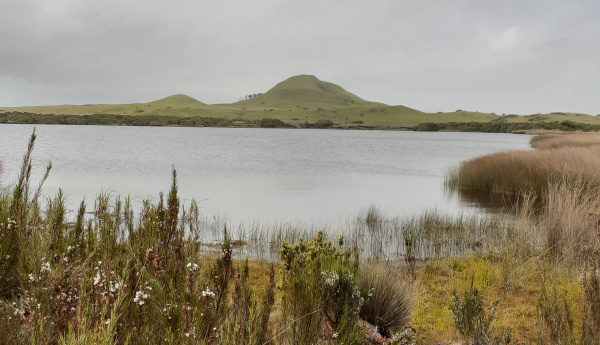 Image: Lake Rotoeka, a peat lake in the northwest of Rēkohu. Photo by On Lee Lau.

All of New Zealand’s native freshwater fish are ancestrally diadromous, meaning they spend part of their life cycle in the ocean and part in lakes or streams. However, some species are capable of reproducing entirely within freshwater, bypassing their marine stage and becoming landlocked. This includes many species of non-migratory galaxiids found in New Zealand, and Otago is considered a biodiversity hotspot for these fish species. 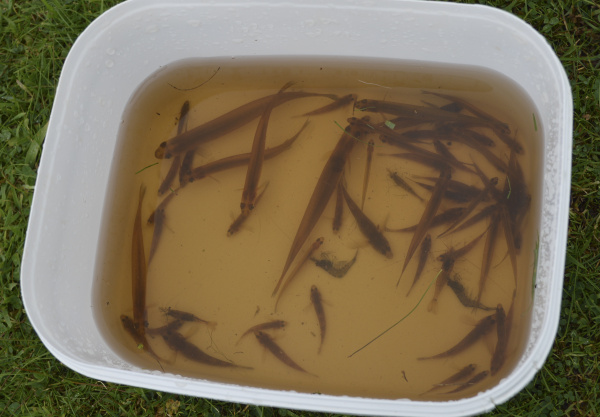 Image: Native fish and shrimp captured with a fyke net. Photo by On Lee Lau.

During our time on Rēkohu, we have visited a series of isolated dune lakes with populations of fish serving as a perfect natural laboratory for studying what happens when organisms become landlocked. New Zealand common smelt, Retropinna retropinna, are plentiful in many of these lakes and University of Otago PhD student Motia Ara is finding genetic and morphological differences between diadromous and landlocked smelt populations. This summer, Otago MSc student Grace Davidson is investigating the effect of increased salinity on fish diets and food web relationships by comparing brackish and freshwater dune lakes. This work may help us understand how species might or might not adapt to future sea level rise due to climate change and resulting intrusion of salt water into low-lying freshwater habitats.

We have been extremely fortunate to be able to visit just about every lake on Rēkohu except for a few that are very difficult to access. We also took the opportunity to show local school students what we have found in their island’s lakes and streams. We were able to give students a really close look at their native fishes using miniature aquaria that allows us to see a profile view of the fishes (pictured in this blog). While smelt is common in the island’s lakes, it is the bullies and galaxiids that are more common in the island’s streams. 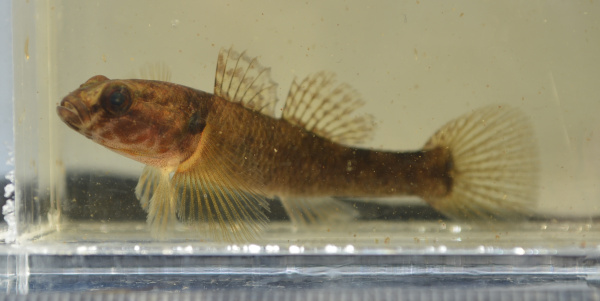 Redfin bullies are found in coastal streams throughout New Zealand but are classified by the Department of Conservation as "at risk" with declining populations due to habitat loss and predation by introduced brown trout. Males often have striking red markings on their fins and body, likely for attracting the attention of females which have more subtle brown markings. You can see Otago Museum’s cast specimen of a male redfin bully here, otagomuseum.nz/collections/search-the-collection/VT3204.

Giant kōkopu are the largest fish of New Zealand whitebait species and can grow up to a half metre long; they are also called native or Māori trout due to their size. Galaxiid species like giant kōkopu do not have scales, so their bodies are smooth and protected by a slimy mucus layer. Whitebait in New Zealand is made up of the juveniles of five galaxiid species and smelt, which are caught as they migrate up rivers and streams from the ocean. While this is an important traditional food source, we also recognize that many of the species being consumed are considered to be threatened and have declining populations.

Endemic is the term we use to describe species that naturally live in limited places. The Chatham Island mudfish is a perfect example of an endemic species found only on Rēkohu. The Chatham Island mudfish is most closely related to the Canterbury mudfish, so a common ancestor very likely lived in and migrated from the ocean before both species became isolated in freshwater habitats. Mudfish species tend to live in wetlands and muddy streams on the mainland, so the ecology of mudfish living in lakes on Rēkohu is peculiar and interesting.

The Chatham Island mudfish was discovered in the southern peat lakes and described in 1994, and there is still not very much known about the biology of the species. The most recently discovered population was found in 2019 in a small dune lake on the opposite side of the island, proving that there are still surprises and new discoveries ahead in New Zealand freshwater research.

A major factor in why these native fishes are thriving on Rēkohu is that there are no invasive or introduced fishes established on the island. Introduced salmon and trout can be predators of native fish and also outcompete them for food and space. Visitors to Otago Museum can find out much more about New Zealand’s native and introduced fishes soon when a new stairwell exhibition opens in April 2022.

In my next and last segment of this blog series, I will show you a bit of the collections management work I have been completing remotely for the last few months and celebrate some milestones in our work to make Otago Museum’s collections available for research and access.