Is it a horse? Is it a deer? Is it a sheep? Rhyta in the Classical Collections

home > Otago Museum Blog > Is it a horse? Is it a deer? Is it a sheep? Rhyta in the Classical Collections 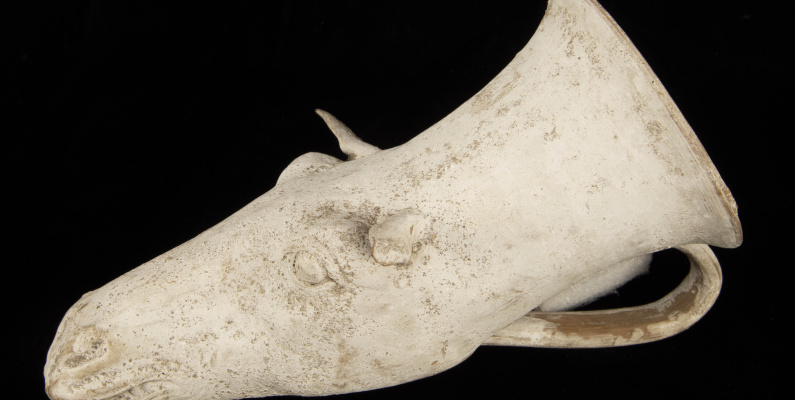 With the festive season behind us, we can perhaps farewell it in suitable fashion by looking at a series of ancient Greek pottery vessels dedicated to drinking.

Otago Museum has a number of wine cups that are called rhyta (singular: rhyton). The name signifies ‘flowing’ in Greek, and refers to the pouring of liquid, usually wine, through the funnel-shaped vessels, usually into one’s mouth but also on to the ground as an offering (libation) to the gods.

The simplest form of rhyton is that of a conical funnel, tapering from a wide circular mouth down to a point that may be punctured with a small hole. A Mycenaean rhyton of this form is on display in the Peoples of the World gallery:

This comes from Cyprus and dates to about 1350 BCE, a period classified by archaeologists as the Late Helladic period of the Greek Bronze Age. This period marked the building of large palaces at Greek mainland sites like Mycenae (from which the whole Late Bronze Age period in Greece is commonly named), Tiryns and Pylos. At the later end of this period, Late Helladic III, to which our rhyton belongs, the Greek mainland both traded with and colonised other areas of the wider Mediterranean, notably the island of Cyprus to the east, which bordered the older civilisations of the Near East, and which was a major source for copper, the fundamental ingredient of bronze.

While the basic conical form of this rhyton is evidence of the vessel’s manufacture on a potter’s wheel, other rhyta betray more natural origins from animal horns. Such a rhyton is held by the god of wine, Dionysos himself, in a scene of partying on a much later, black-figured amphora dating to about 530 BCE and made in Athens: 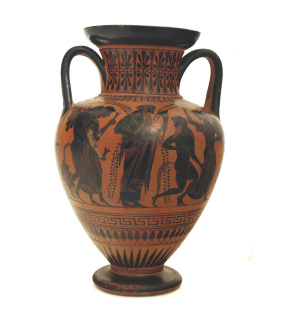 Here the god is surrounded by his human followers, the female maenads, and by the animalistic satyrs, naked bearded men with horses’ ears and tails. Dionysos is holding in his left hand a drinking horn made presumably from an ox horn.

A curvier version of the same type of vessel appears on another Athenian vase on display, a red-figured bell-krater (turn the vase upside down and you’ll see why it’s so called!), dating to about 380 BCE: 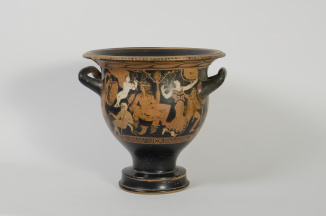 The rhyton is nestled under the central figure of Dionysos, who is again surrounded by his maenads and satyrs, as well as winged Eros (Cupid) and old Papposilenos (a ‘grandfather’ satyr).

More elaborate and remarkable than these simple funnels or horns are the animal-headed rhyta that survive from the Greek world, from the fifth and fourth centuries BCE, such as this deer-headed rhyton, which is currently in storage: 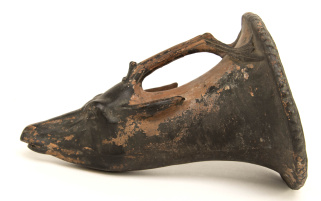 The realism of the deer head was impressed on me recently after looking at a local herd of deer. The head of a fallow deer fawn like the one below illustrates how[KO1]  closely the potter observed the natural forms of such a deer. 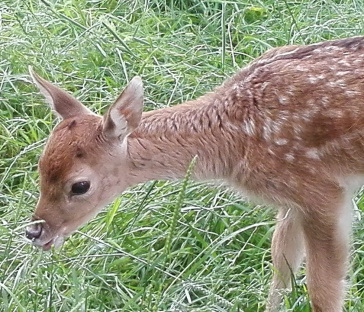 Another example of such realism ought to be this rhyton, decorated with the head of a dog, which is also in storage. 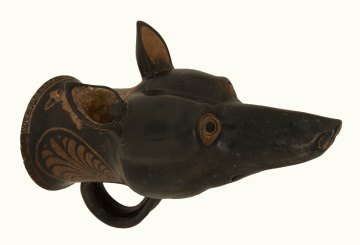 It has features that are recognisable as those of the ‘Laconian’ hound, such as the Greek soldier-historian, Xenophon, described in the fourth century BCE:

They should have heads that are light, flat-nosedand well-jointed; the lower parts of the forehead muscular; the eyes raised, black and shining; the forehead broad, with a deep division; the ears small, delicate, hairless …

The potter has captured these traits, but how realistic it is we can judge only by comparison with other literary descriptions and other artistic representations, as the breed has disappeared (though its progeny survive in some modern hounds).

A white-clay rhyton is on display: 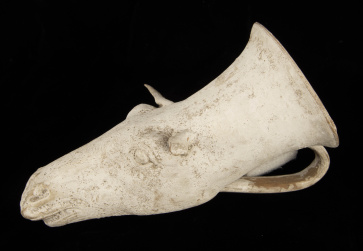 Like the others that we’ve seen, the lower half of it is shaped by a mould into the form of an animal’s head, while the upper half is made into a wide funnel that carries the handle. The animal has been identified in the label as a horse, but I doubt this: the ears are too small, and the muzzle too elongated. So if it’s not a horse, what is it? – an ass, a deer, a sheep, a goat? There are images available online of the now extinct Syrian wild ass that seems related (https://en.wikipedia.org/wiki/Syrian_wild_ass#/media/File:SyrianWildAss-London_Zoo.jpg). And there are also images of white fallow deer that look similar, and which might explain the use of white clay for our rhyton (https://en.wikipedia.org/wiki/Fallow_deer#/media/File:Duma_duma.jpg). But my own thinking is presently to see it as a sheep of a Mediterranean breed, with a long, narrow head.

What do you think?

However, there can be no comparing with a real animal for our last rhyta: 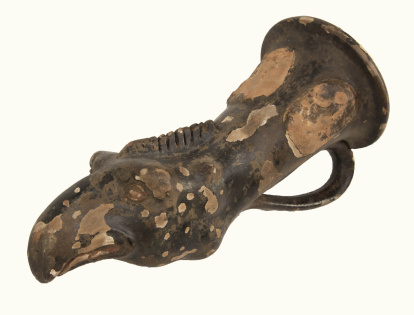 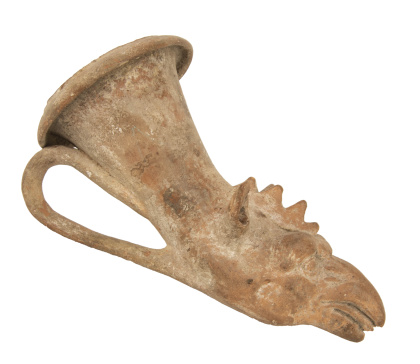 This is a pair of griffin-headed rhyta, currently in storage, one decorated with a simple black slip, the other undecorated in red clay. These griffins are the common-or-garden crested, eagle-headed variety – the Greeks also depicted a horned lion-headed type, and even a lynx-griffin.

Readers who have visited the Dinosaur rEvolution exhibition may recall the display of Triceratops skulls, which were noted for their neck frills and their beaked mouths. Adrienne Mayor, a scholar based at Stanford University, has suggested that the chance discovery in antiquity of fossil skulls like these might lie behind the invention of the eagle-headed, lion-bodied griffin. Her hypothesis is controversial though, and has been countered by the palaeoontologist, Mark Witton (http://markwitton-com.blogspot.com/2016/04/why-protoceratops-almost-certainly.html).

The Roman natural historian, Pliny, didn’t believe in the existence of griffins, although his reference to them implies that some people did:

I take it that the birds called ‘pegasi’, with a horse's head, and griffins, with long ears and a hooked beak, are fictitious.

We’ve seen that the Greeks were perfectly capable of representing animals realistically, but also that they could happily invent fantastic creatures like the satyrs. And as for griffins, who knows what they thought they saw after a couple of rhyta of wine?