Striking a Balance is BACK

home > Otago Museum Blog > Striking a Balance is BACK 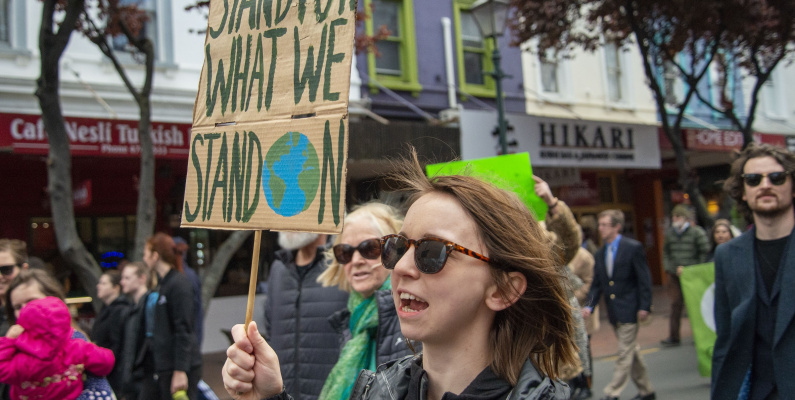 This article, written by Kate Oktay, was published by Good Magazine on October 20, 2020. Due to popular demand, Climate Change – Striking a Balance has returned for an additional two weeks, closing on 4 December.

On New Year 2020, New Zealand woke up to an apocalyptic, mustard-coloured sky, and in the haze of bushfires, a sense of foreboding was felt by many around the country. It was as though we were being offered a window into a terrifying future, one that reflected the consequences of our planetary waste and destruction. Now is the time to act before it is too late, many of us thought.

And as the year wore on, the window was thrown further open: fires engulfed Brazil and California, locusts swarmed, social unrest festered, and a global pandemic brought the world to its knees. Could it be that the future we feared but didn’t act on was here?

It seems easy to lose hope.

But, the generation that have caused the least damage and have the most to lose is shining a light for the rest of us.

Climate Change: Striking a Balance, an upcoming youth-led exhibition created by school students from Otago and Southland, is partnering with the UN Development Programme’s #ForNature campaign. In both of these projects, the students have been given the voice and the platform to speak to their communities and the world about the future that they are being handed along with the knowledge and tools to change it.

Dr Claire Concannon of Otago Museum is coordinating the exhibition that is developed entirely by the youth utilizing the expertise of the Museum’s exhibition and design team. They are a diverse group: in age, background, and outlook. Thomas and Rose are just 12, and the oldest is 17. Some began the project not knowing much about the issue of climate change, while two, Hector and Jess have been living on a boat sailing around New Zealand for eight years, and were immersed in planet activism. Since November 2019 the team have been working on the exhibition, which opened on 3 October.

They have spoken to international paleoclimate scientists on the JOIDES Resolution from the middle of the Pacific, climate scientists in the Antarctic, School Strikes 4 Climate organisers, exhibition and events experts, and connected with youth from pacific nations that have been affected by rising seas and the ravages of climate change, sharing their voices in the exhibition.

“Will this ocean that has fed our forefathers be the same that devours the coconuts and the trees?” writes Palauan student, Hisaye, whose poetry is displayed. Featuring original artwork, video interviews, a 6-meter timeline of climate change, and displays to communicate the inequality of emissions and impacts, the exhibition is impressive in its range. “A really important part of this exhibition was to not only show the reality of the science but also to empower people to make changes. There is a list of actions that people can take, a pledge wall, and of course the UN #ForNature manifesto, which we were thrilled to be able to include, and truly brings home the global essence of this problem” said Dr Concannon.

Andrea Egan, UNDP’s Knowledge Management and Results Specialist, who is supporting the UN’s youth-led campaign agrees and adds, “We must act now, the youth of today have so much to lose, everything, in fact. We need to listen. The resolve of these young people is truly inspiring, they are holding our feet to the fire and demanding that we take action.”

The Youth #ForNature Initiative is a worldwide campaign where youth from different social backgrounds, ethnicities, genders, geographies, and languages are uniting as a global and inclusive collective #ForNature. Drafting a Manifesto and asking everyone to sign their Open Letter, youth are working to ensure that their priorities are included in policymaking. Supported and amplified by the UN, youth are speaking on topics they believe in, in Chinese, French, Spanish, Russian, Portuguese, Swahili and English, and their voices are rising.

We must stand behind them to push for transformative change together. 2020 has shown us one possibility for our shared future. We must build another.

Climate Change – Striking a Balance is at Otago Museum now until 31 October, and then from 15 November to 3 December.