A world with no parasites: sustainable or not?

home > Otago Museum Blog > A world with no parasites: sustainable or not?

Over the past couple of years, many tiny worms have wriggled their way into the Otago Museum’s collection. You might be wondering why these parasitic creatures are so welcomed by the Museum – won’t they make us sick? Wouldn’t the world be a better place without them? The truth is rather different – in the absence of parasitism, the world, as we know it, would cease to exist and its inhabitants would be heading towards a spine-chilling surrealism!

First, accompany me to a world swamped with squeaky rats and mice. Many parasites control their host populations via cunning strategies such as mind manipulation, so that the host willingly seeks out its predator. Such is the case in mice, who become attracted to cats after contracting toxoplasmosis. This increases the parasite’s chances of transmission to its definitive host where it completes its own life cycle and reproduces. So in a way, the parasite helps control the mice population.

Image: An illustration of "The Mice in Council" in Choix de Fables de La Fontaine where the mice decide to bell a cat to alert others when the cat’s approaching, but no one volunteers to place a bell on the cat. Public domain image.

Although tiny armies of parasites are not alone in keeping a tab on host numbers, they play a pivotal role in doing so. In fact, it is the ability of parasites to harm their hosts that leads to a remarkable natural phenomenon called the Red Queen hypothesis. Remember the scene from Through the Looking Glass, where the Red Queen tells Alice that she’ll have to keep running in order to remain at the very same place? It’s a bit like that for parasites and their hosts – both hosts and parasites must constantly change and evolve in order to assure survival. Spooky as it may sound, the eternal relationship between hosts and parasites is indeed shaped by this continuous race.

Nothing explains this phenomenon better than the trait of “brood parasitism” exhibited by cuckoos. These cheeky birds have found the solution to escaping the hardest job on Earth – raising their young! They do this by exploiting a host species like a starling. A cuckoo will lay its eggs in its host’s nest and trick it to hatch them as their own.

The cuckoo’s eggs mimic the egg patterns of a starling, but the starling is not as foolish as you may think – starlings are developing strategies to vary the patterns in their own eggs to distinguish them from cuckoo eggs. If all starlings are able to weed out the foster eggs laid by the cuckoos, the cuckoo will no longer be able to trick their hosts – bad news for the cuckoo. So the cuckoo endeavors to copy the changing egg patterns of the starling’s eggs in order to continue exploiting it.

Cuckoo chicks are master tricksters, too! By mimicking the sound of starling chicks, they’re able to trick their foster mothers into feeding them. If you’ve ever seen a starling and a cuckoo, you would have noticed the massive difference in size between them. A minuscule mother, feeding a giant chick, how can she successfully raise the hungry chick of a bird more than twice its size? Well, the cuckoo chick has another trick up its sleeves – its call matches the sound of multiple chicks, all begging for food at once, tricking the starling into feeding the same chick again and again. The chicks take the vindictiveness a step further by expelling the starling’s own eggs out of its nest. 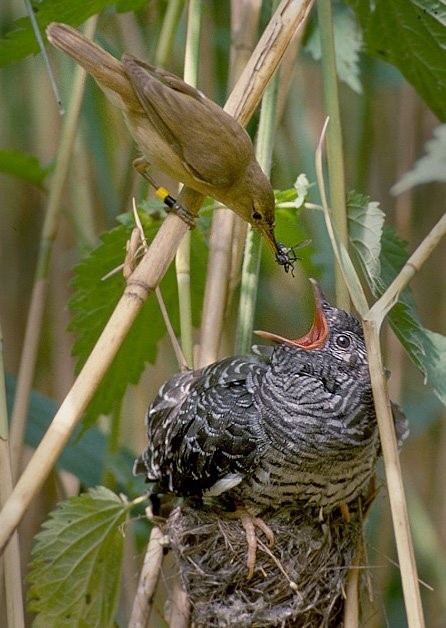 Image: Reed warbler feeding a common cuckoo chick is a classic case of brood parasitism. By Per Harald Olsen. CC BY SA.

The cuckoo is a particularly malicious parasite, but not all parasites are so evil. In fact, being infected by some parasites is what makes us resilient when attacked by more harmful parasites. In 1796 Edward Jenner noticed that milkmaids who were exposed to cowpox became resistant to scarring smallpox. His observation led to the discovery to immunisation ­– a perfect example of a parasite saving the world! Some of you might also be familiar with the cleanliness hypothesis that argues the need for humans to be exposed to germs so our immune system can become strong and won’t go haywire as soon as it encounters any nasties.

Image: In The Cow-Pock – or – the Wonderful Effects of the New Inoculation! (1802), James Gillray caricatured recipients of the smallpox vaccine developing cow-like appendages. Public domain image.

Given the benefits parasites bestow upon Earth, the more we know about them, the better we can understand our environment and arm ourselves against the true nasties! The parasites that arrive at the Museum form important research material to help us understand our biodiversity and environment. This information is particularly important in a world threatened by an array of anthropogenic activities including climate change. These new acquisitions are a result of collaborations between the Museum and local parasitologists, as well as of independent collection efforts by the Museum, addressing the gap in our knowledge of local diversity of these tiny, but indispensable creatures.