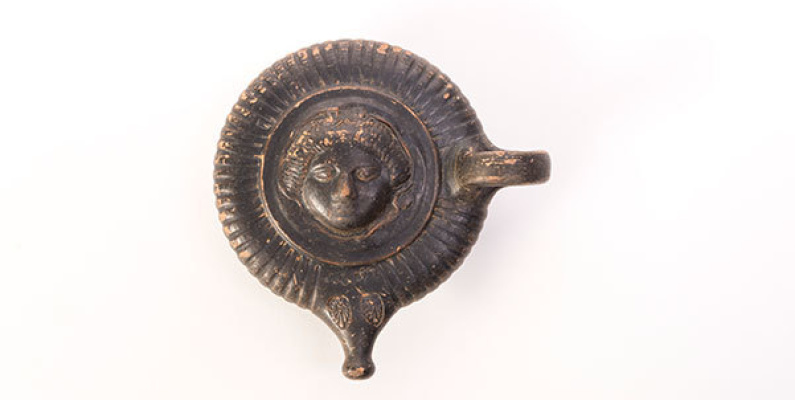 Among the objects on display in the deadliest case in the est. 1868 exhibition are two small, ancient Greek items, some 2300 years old. One is an oil-lamp filler (guttus), the other a small oil flask (aryballos). Both bear images of the head of Medusa.

Medusa is one of the best known Greek monsters, remembered for her snaky hair and stony stare – literally: her stare could turn anyone she looked at into stone. Her story is a very old one, touched on briefly by the poet Hesiod around 650 BC, and it may go back much further still in the ancient Middle East.

Hesiod tells of the three Gorgons, two immortal but one, Medusa, mortal. He mentions her beheading by the hero Perseus, and how the winged horse Pegasus and the human-formed Chrysaor sprang from her body as a result. But he provides no context to explain the dreadful decapitation.

For the fuller story we can turn to a much later account given by Apollodorus in the 2nd century AD. It’s complicated but the nub of it is that the hero Perseus is sent on what’s meant to be a suicide mission to bring back the head of Medusa. He gets items that will help him in his quest: winged sandals, a cap to make him invisible, a bag for the head, and a sickle of adamantine. Even with these, Perseus still needs the goddess Athena’s assistance to hold a shield near the Gorgon, so that Perseus can look at Medusa’s reflection in the shiny metal to do the deed and not risk looking directly at her and so be turned to stone. The dastardly deed done, he escapes Medusa’s vengeful sisters by wearing the cap of invisibility and flying off with his winged sandals. He then uses the Gorgon’s head to turn his enemies into stone, before giving it to Athena, who either places it on her shield or wears it on a goatskin (as her aegis) over her chest as a protector and a symbol of terror. 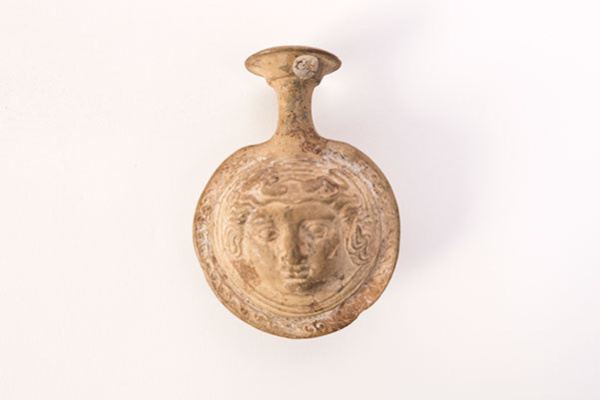 Early images of Medusa portrayed her in fairly brutish fashion: with snakes in her hair, large staring eyes, bared teeth – boar’s tusks even, in some cases – and tongue poking out. She is a monster, whose face was intended to be what we call “apotropaic”, meaning to avert evil. This is presumably why her head appears on the two objects in the deadliest display: lamps provide light in the dark, and Medusa’s head was meant to ward evil away from the carrier.

At the end of the 5th century BC, Medusa is given a makeover and her monster face humanised into the image of a beautiful young woman. This may have something to do with a tendency at the time to humanise the images of the gods generally. In Medusa’s case, it may also reflect an image of her on the aegis worn by Athena on her colossal statue that was made by Pheidias for the Parthenon in Athens. And it may have something to do with Greek artists finding some pathos in what is otherwise a pretty brutal fairy tale. All the same, her apotropaic function remains, and the guttus and the aryballos on display show how this human version was coupled with the scaring function from the 3rd century BC onwards.