The round camera, about the size of a side plate, in the smallest section of est. 1868, might not seem particularly petite today, but in the 1880s a handheld camera like this was dramatically diminutive.

“The box is so small that it can be carried anywhere without the slightest inconvenience,” ran one advertisement. Compare this to the Burton Brothers’ cumbersome Meagher camera, and its tripod mount, on display in our Southern Land, Southern People gallery. All of a sudden, camera owners could take photographs without making complicated arrangements, asking for permission, or even letting people know they were being photographed.

The change was social and technological. It allowed what many people saw as an invasion of their privacy; various artists were excited by the possibilities but certain photographers abused the situation: “These cameras, commentators complained, stimulated a new mania in the form of ‘snap shot fiends,’ mostly men, who took candid photographs of unsuspecting citizens, often vulnerable women.” [1]

Some users, however, were happy to straightforwardly harness the camera’s scientific potential. Carl Lumholtz described preparations for an 1891 expedition to the Sierra Madre: “We were fully provided with a photographic camera, two kodaks, one detective camera, assaying outfit, anthropometric, meteorological and geodetic instruments, etc.” [2]

The Stirn camera wasn’t just small; it was secreted, designed to be concealed under a waistcoat with the lens poking through a buttonhole. It was one of a number of disguised or hidden “detective cameras,” the name perhaps reflecting the late 19th century interest in crime fiction. Others included Marion’s parcel detective camera “neatly covered with brown linen-lined paper and tied with string like an ordinary parcel,” and one that fitted in the crown of an apparently ordinary bowler hat. There was also the “not unladylike” photographic watch, from which a miniature camera shot up when the operator pretended to look at the time. [3] The "Necktie" camera, reported under development, was to be “concealed under a large necktie, of which the lens forms the pin… The shutter is set by turning the top button of the waistcoat; and it is discharged by means of rubber tubing connected with a bulb which is carried in the trousers pocket.” [4]

There is an almost Jules Verne-like sense to some of these accounts. 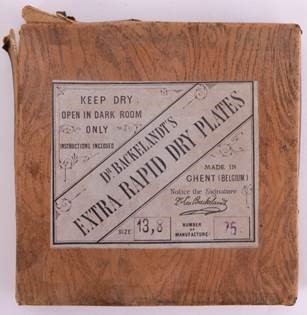 Smaller, deliberately obscured, increasingly affordable… the issues raised in the 1880s and 90s sound curiously contemporary. There was a widely reported instance of a man gaoled for contempt of court, after using a detective camera to photograph the witness in a court case. [5] There were concerns for the quality of the images produced, and about their impact on established photographic businesses. “Any possible mania or desire for photographs can soon be gratified at trifling expense and after a short term of practice by means of this invention. Photographs can soon be so multiplied as to become a positive nuisance, and from the various considerations that enter into the matter, it does not seem so very easy to answer our query - What next?” read one article. [6]

Was it also the start of a surveillance society? 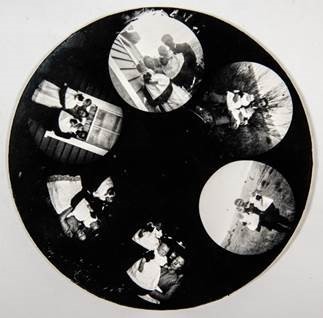 The Stirn vest button camera on display in est. 1868 was given to the Museum by Geoffrey Jeffery, QSM. In the 1890s, Geoff’s father, Frederick Jeffery, owned the Teviot Dispensary, acting as a chemist, bookseller, stationer, newsagent and tobacconist. He was also the agent for Raglan Bicycles and the Dresden Piano Company, and stocked photographic equipment. When he retired, two of his sons took over the business: Geoff focused on the photographic area, while his brother concentrated on the pharmacy. Family members think that a developed plate of images from the camera might show his parents, Frederick and Maude Jeffery.