New Zealand was a common port of call for nineteenth-century oceanic expeditions. In 1874, New Zealand was host to the HMS Challenger, the largest-ever ocean-going UK government-funded expedition. The crew and scientists laid the foundations for the study of modern oceanography by determining the depth of the ocean floor at 362 observation stations around the world, measuring water temperature at different depths, and collecting samples of water, sediment and sea creatures. [1]

In March 1875, the HMS Challenger crew recorded a sounding of 4475 fathoms (8184 metres) deep at sample station number 225, located in the southwest Pacific Ocean between Guam and Palau. [2] They had discovered the southern end of the Mariana Trench, one of the deepest known places on the ocean floor. A survey of Mariana Trench in 2011 using a multibeam echosounder recorded the deepest point at 6012 fathoms (10994 metres). [3]

The HMS Challenger expedition amassed a huge number of specimens during its three-year voyage around the world. In the introduction to his scientific reports, Charles Wyville Thomson, chief scientist on board, wrote:

It rapidly became obvious that, despite large stores of bottles and spirits, there was neither the materials, nor the personnel, to arrange the preservation, storage and inspection of every specimen. Bringing specimens to the surface from great depths exerted severe changes in temperature and pressure, and left some useless for anatomical examination. Others were lost during the preservation process. 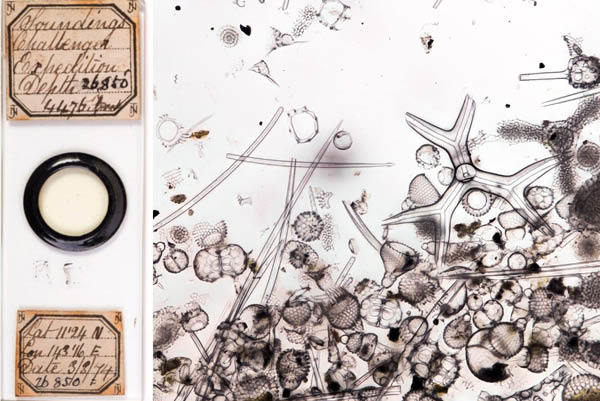 Samples of Radiolaria were collected on the HMS Challenger expedition near Mariana Trench, and it is their silica-based micro-sized exoskeletons that have survived. Radiolaria are a diverse group of protozoa that live in oceans around the world and appear in the fossil record about 600 million years ago. [4]

Otago Museum has some fifty microscope slides in a wooden box that was presented to Gilbert Rawson by Ernst Haeckel (1834-1919), the noted German evolutionist. Rawson’s brother, Sidney, was a Dunedin dentist and amateur botanist, who specialised in Radiolaria and microscopic diatoms from Oamaru. The box with samples of Radiolaria from the HMS Challenger expedition came to Otago Museum, along with Sidney’s own collections, in the early 1950s. [5]

Otago Museum is host to the James Cameron - Challenging the Deep exhibition, which features discoveries made by James Cameron and his crew on the unique diving vessel Deep Sea Challenger in the Mariana Trench and other deep sea locations – carrying on the legacy of the HMS Challenger expedition to explore the ocean and the vast unknown of the ocean floor.