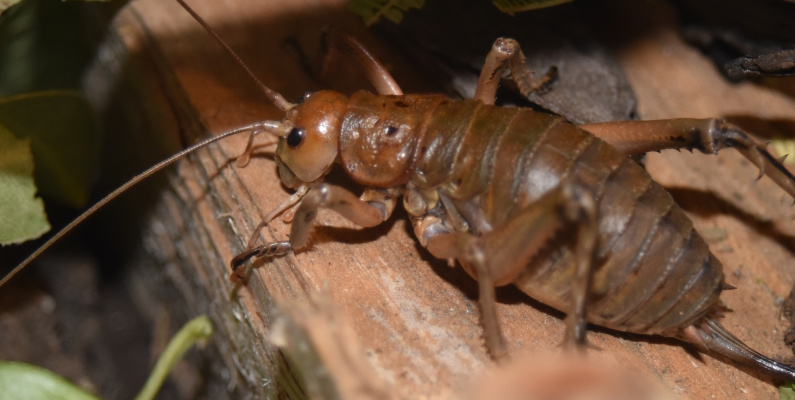 People have brought us some pretty strange things for identification, but this one may have been a first. Giant wētā are not usually found in Dunedin and it is thought that this one hitched all the way to Dunedin from Kaikoura in a student’s car. The students who found her nicknamed her Eddie and brought her in to us in a sushi container.

The wētā was identified by experts as the Kaikoura giant wētā (Deinacrida parva), based on the number of sharp spines along her back legs.

Eddie is a female wētā. You can tell by her long spike (ovipositor) used for laying eggs in the soil. She looks like a very large armoured grasshopper and would have shed her tough exoskeleton several times to grow to her adult size (over 10cm long).

Giant wētā are only found in New Zealand and are protected taoka species. The Little Barrier Island giant wētā is the world’s heaviest insect. They can grow up to 15cm long and weigh up to 71g – three times heavier than a house mouse.

If the idea of a bug three times heavier than a house mouse strikes panic into your heart, never fear! Giant wētā are gentle creatures and have a mainly vegetarian diet. They are nocturnal, hiding during the day and coming out at night to feed on the leaves of native trees and shrubs.

All eleven species of giant wētā are flightless, which is fairly common for endemic (native) New Zealand wildlife. This makes them an easy target for predation from introduced mammals like rats, cats, stoats and hedgehogs. Their survival is also threatened by the destruction or modification of their native habitat.

Although we were sad to say goodbye to our little(ish) buddy, the Collections and Research team at the Otago Museum worked closely with the Department of Conservation (DOC) to find a good resolution for this adventurous wētā.

Eddie travelled north back to Kaikoura (a 1,000km round trip) the weekend of 14 November 2015 to be released in her natural habitat in the Kaikoura ranges. DOC are currently undertaking predator control work in the ranges to protect nesting Hutton’s shearwater. Giant wētā have also benefited from the removal of introduced mammals, which means their numbers are steadily increasing in that area.