Celebrating the 150th Birthday of Genetics (sort of) 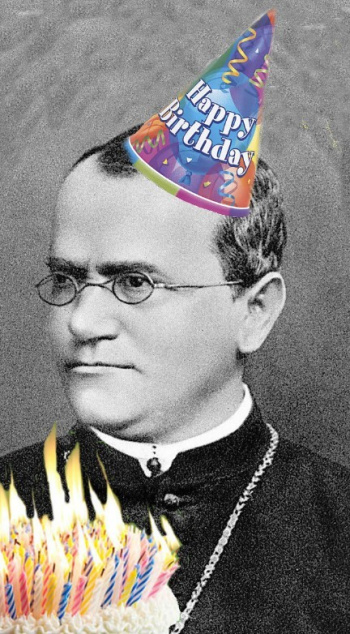 This piece of birthday perfection was made by multi-talented Curator, Natural Science Emma Burns

We're celebrating the event with some hands-on genetics involving bananas and the Animal Attic (100% truth) on Sunday 6 March with Genetics Otago.

Then, on Tuesday, Professor Roger P. Hellens is giving a talk on Mendel and his legacy on Tuesday 8 March at 6.30pm – check it out here.

The gutting thing about poor old Mendel is that his work was largely ignored during his lifetime. It wasn’t until it was revisited in the early 1900s (a few decades after his death) that people realised the magnitude of his findings.

Do you remember drawing punnet squares in high school biology about wrinkly peas and brown and blue eyes? You've got Mendel to thank for that!

He began experimenting in 1856. Using the humble pea plant, he sought to understand how traits passed from parents to their offspring. His work, finally published in 1866, gave rise to a new and exciting field of science that underpins the evidence for evolution by descent.

So in a way, it is also happy birthday to the field of genetics, even though Mendel wouldn't have known that term.

Prior to Mendel playing with peas, biologists believed that the traits observed in offspring were the result of blended inheritance. So, they thought the traits from mum and traits from dad combined and averaged out to create the offspring’s trait. A tall parent plus a short parent produced offspring at a height in the middle, for example.

But this wasn’t the case.

Mendel spent eight years breeding generation after generation of pea plants. He cross bred parent plants with specific observable traits (phenotypes) that were visibly different, such as the flower colour, the seed colour, the pod shape and more.

This long period of time, with a test subject that reproduced quickly, made his research elegant and convincing in comparison to other early breeding studies.

Mendel recorded which of the two traits were expressed in the first generation offspring. He then allowed the pea plants to self-pollinate and recorded how many times each trait popped up in subsequent generations. 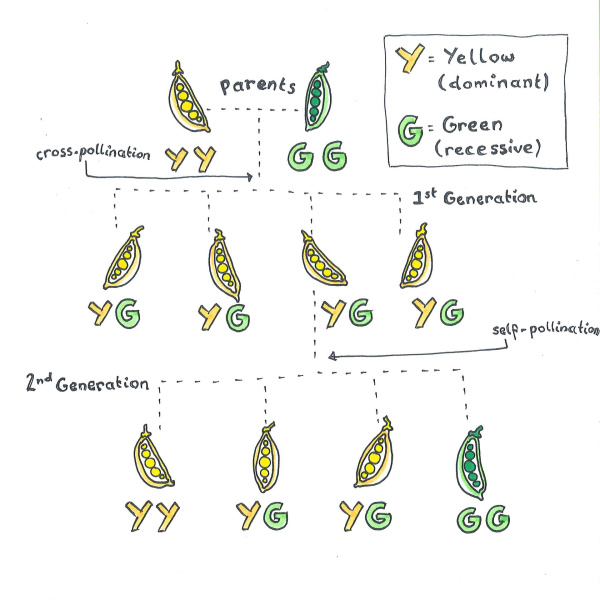 There was no average between the two colours (like a yellowy-green seed) or pods containing a mixture of yellow and green seeds. If he’d found either of those things, it would have made a case to support the blended inheritance theory.

Mendel made some important conclusions from these experiments:

Since Mendel's research, contemporary geneticists have discovered oodles more about genes and how they are expressed in organisms. While Mendel’s findings still provide good basic principles, we now know that there is way more going on.

Thanks to the discovery of DNA – the building blocks of genes – whole genomes have been mapped and published for different species. It reinforces that all life on Earth is related. For example...

...geneticists have discovered that humans share 50% of our DNA with bananas! To learn about your banana cousins and about the field of genetics, head up to the Animal Attic on Sunday 6 March to do some genetic sequencing on bananas, guided by the capable hands of Genetics Otago.