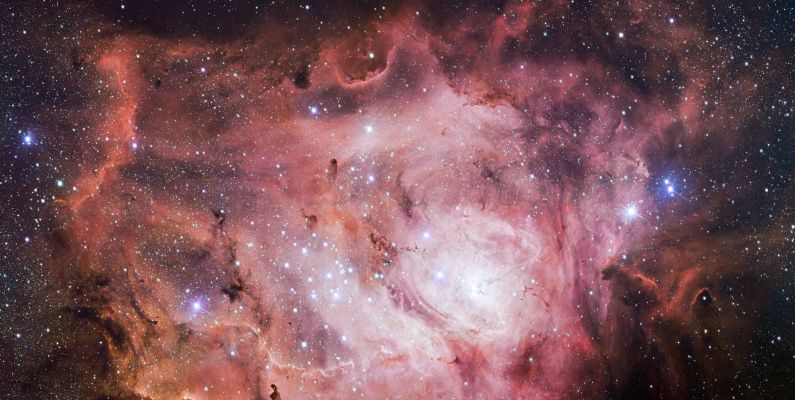 Welcome to the Sky Guide, your monthly guide to what's happening in the heavens!
Check out the printable version here: Sky-Guide-August-2020.pdf

The month of August is considered the best time to view the constellation Sagittarius, which will be visible in the East. This constellation is thought to represent a centaur, a mythical creature that is half man and half horse, holding a bow and arrow. The constellation of Sagittarius is the largest in the Southern Hemisphere, and it is the 15th largest constellation in the sky. Sagittarius has many bright stars, making it easily visible to the naked eye.

The brighter stars in Sagittarius form an asterism known as ‘the Teapot’. An asterism is a well-known pattern made by a group of stars, that isn’t an official constellation. The Teapot can be found within the bow and arrow of Sagittarius, and consists of a teapot body, handle, lid and spout. On a clear night, the Milky Way can be seen passing the tip of the spout, as if a puff of steam is rising from the teapot. Kaus Australis, also known as Epsilon Sagittarii, is the brightest star in this constellation and marks the bottom of the spout in the teapot asterism. 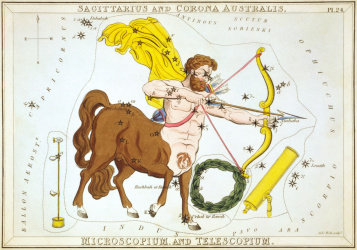 Sagittarius as depicted in Urania's Mirror, engraved by Sidney Hall.

The densest part of the Milky Way is located near Sagittarius, as this is where the galactic centre lies. As a result, Sagittarius contains many star clusters and nebulae.

Pictured on the cover is the Lagoon Nebula, also known as Messier 8, which is located in the constellation of Sagittarius. The Lagoon Nebula is located between 4000 – 6000 light-years from Earth. This nebula has an apparent magnitude of 6.0, which makes it faintly visible to the human eye in good conditions with clear, dark skies. It is best seen in the Southern Hemisphere from mid-winter to mid-spring and can be found with a pair of binoculars, appearing about three times the width of the full moon.

To find the Lagoon Nebula, first locate Kaus Australis, the brightest star in Sagittarius which marks the bottom of the teapot's spout. The nebula is located about twice the length of the teapot spout upwards from this star. While in photos it appears pink, to the human eye it will appear grey due to our poor colour sensitivity in low light.

Sparkling above the horizon during the cold winter mornings of August is brilliant Venus. Visible from around 5am until the Sun rises, Venus can be seen shining in the northeast. Venus is the second-brightest object in the night sky after the Moon.
On August 13, the planet Venus will reach its greatest western elongation from the Sun. This makes the month of August a good time to view Venus, as it will be at its highest point above the horizon in the early morning sky.

Because Venus lies within the orbit of our planet, to us on Earth it never appears to move very far from the Sun and is visible either setting below the horizon just after sunset, or rising in the morning just before the sun. This has earned Venus the nickname of either the morning star or the evening star depending on when it is visible.