Welcome to the Sky Guide, your monthly guide to what's happening in the heavens!
Check out the printable version here: Sky-Guide-July-2020.pdf

There are many myths around who Ophiuchus is said to represent. In ancient Greek, the constellation was said to portray the god Apollo wrangling a huge snake. In Roman mythology, it was said that Ophiuchus represented Asclepius, the god of medicine. In this story, Asclepius figured out how to prevent death for humans. As the other Gods didn’t want the human race to become immortal, Asclepius was struck down with a bolt of lightning, but placed in the stars to honour his work. 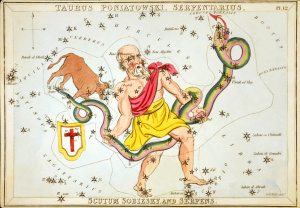 Ophiuchus as depicted in Urania’s Mirror, engraved by Sidney Hall.

Located within the constellation Ophiuchus is the Rho Ophiuchi cloud complex, pictured on the front cover. These beautiful, colourful clouds of cosmic gas and dust make up one of the closest star forming regions to our solar system, located around 460 light years from Earth. Regions such as this one are often referred to as ‘stellar nurseries’, as they are areas where new stars can be formed.

The cloud complex is roughly 3000 times as massive as the Sun. These interstellar clouds encompass emission nebula that are rich with glowing red hydrogen gas and blue reflection nebulas that are reflecting starlight from their surroundings, giving the complex its magnificent colours.

The stars and planets are not the only things to spot in the night sky. While stars move across our sky very slowly, almost imperceptibly, another group of objects can be seen moving with much more speed – satellites. The first artificial satellite was launched into space in 1957 by the Soviet Union. Since then, about 8,900 satellites have been launched , though not all of these are currently operational.

Satellites are used for a range of different operations, many of which we rely on every day, from communications and GPS, to weather monitoring and researching outer space. While satellites do not produce light on their own, they can be most easily seen in the hours just after sunset and before sunrise, when they are able to reflect light from the Sun while it’s close to the horizon. A satellite passing across the sky, as it orbits Earth, will appear as a bright spot, like a star moving steadily through the sky for a few minutes.