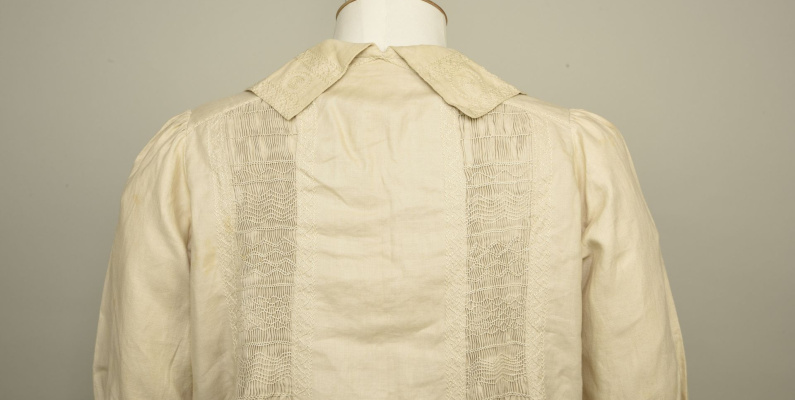 Most of us learn who is supposed to wear what (or not), and what our clothes might say about us to other people, early in life and without even trying.

One set of these strong, unwritten rules relates to which clothes boys and men wear, versus what girls and women wear.

Smocks are – now, at least – a garment strongly associated with women, or young children. Nothing particularly macho about a baby’s gown with a decorative yoke. 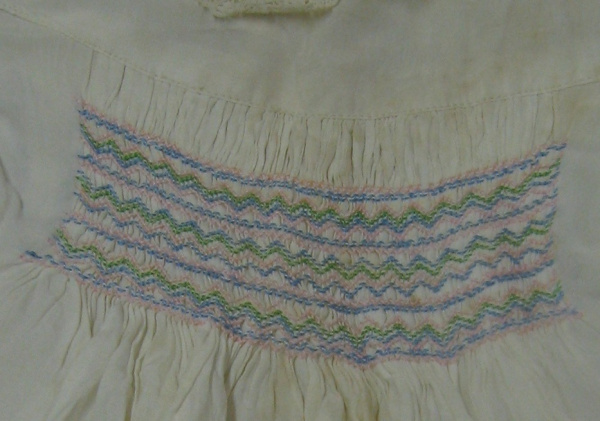 Even a hundred years ago, newspaper articles about smocks and smocking were most likely to focus on the idea that, for example, “the smocked blouse is to be found among the newest and prettiest fashions for smart and simple wear” [1] or advertisements, such as Laura Rohloff’s when she respectfully notified “Ladies of the Borough and surrounding districts that she makes and smocks children’s dresses”. [2]

But it wasn’t always the case. Otago Museum has a 19th century example of an English rural, working man’s smock in its collection.

Handsome over-garments, smocks were once widely worn by men working in the farming areas of south and central England and Wales; as masculine as dungarees, or bib and brace overalls. It was fun to observe that a young lad wearing one of these classic workers’ garments and holding a shepherd’s crook was a large-scale character in the first scenes of Professor Sally Shuttleworth’s Diseases of Modern Life: Nineteenth-Century Perspectives, projected on the north wall of the University of Otago’s Richardson Building, on 8 March 2020.  Their practical loose fit was achieved by shoulder and sleeve panels of smocking – a technique where the fabric is gathered into small pleats by parallel rows of running stitch, and then embroidered. There is considerable variation in the style and design of surviving examples, but claims that the specific employment of the wearer can be identified from the patterning seem inflated.

Dunedin Public Libraries has a copy of English Smocks with directions for making them, [3] which a helpful librarian retrieved from the basement stacks for me to consult. It makes clear that the essence of smocking is the control of gathers by stitchery. Nothing gendered in that per se.

The author notes that “up to fifty years ago, [ie about 1900] the smock was in general use in the rural districts of England and its disappearance was obviously due to the introduction of machine-looms which produced inexpensive materials and enabled country workers to procure clothing at a comparatively small cost with the minimum amount of trouble”. Other writers have suggested that that country wear began to reflect industrial wear, in part, as the agricultural workers were copying the dress of the middle and upper classes – suits. [4]

Armes continues, however, “That English smocks should become extinct is greatly to be regretted for they are practical and beautiful garments which would still serve a very useful as well as decorative purpose”.

In the 1880s, some women began adding smocks to their daywear options: “No artistic dresser would be without a smock cut exactly like a farm labourer’s, with turned down collar and gatherings front and back, gathered full sleeves, worn over a habit shirt, and looped up over an under-skirt with a belt at the waist.” [v]

In the years of WWI, they seem to have become commonly accepted as coveralls for women: “Nor is it surprising that the household smock is taking its place among useful fashions for the home, and supplying the place of painting apron, cooking apron and dusting overall. “The smock is more artistic in appearance than the ordinary overall” [6] and made of materials such as linen, silk or cotton; undyed or in shades of blue, or brown.

There are occasional reports of staff in male-dominated areas in the USA wearing smocks after that. “Bankers, doctors, lawyers and other professional men in Birmingham”, [7] Alabama, wore blue denim overalls and smocks in protest against the high price of clothing in 1920.  And the firm of Wall Street stockbrokers who adopted smocks (again, blue denim) “as the official garb for the staff from the office-boy up. Emboldened by the strength that came from doing it in unison”. [8]

It seems the prediction from the author of English Smocks that, it “may be some time before men will take to wearing smocks again, but now that the field of work open to women is widened and they are becoming more practical in their dress, there is reason to believe there may again arise a demand for beautiful smocks”, was more hopeful than accurate. 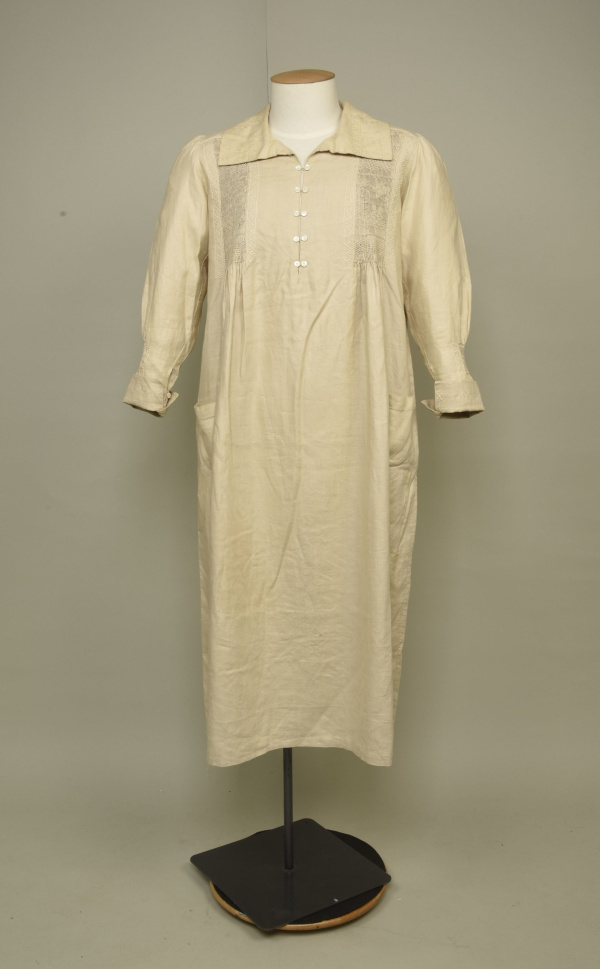 In general, men did not reclaim this garment. Perhaps it had become too strongly associated with female fashions. In 1939, for example, (female) readers of the Manawatu Standard were exhorted to “look your prettiest across the breakfast table or as you whisk about your household duties in one of these beguiling little smocks in designs as gay as spring”, [9] (albeit the style was quite different), or to “whistle while you work in a Rosco smock. You’ll look smart and pretty serving up the bacon o’ mornings in one of these colourful smocks”. They were advertised as tubbable (easy to launder), “hard-wearing and gay enough to brighten breakfast-time for the head of the household!” [10]

The technique of smocking became (and remains) commonly associated with babies’ and young children’s clothes, too. “Small boys and girls alike are now rejoicing in prettily-smocked overalls ... For girls, pink smocks are pretty in change with light blue ones; and for little boys, pale blue and reseda green smocks are well chosen”, wrote Ida Meller in 1916 when she noted that the newest and prettiest nursery garments were smocked; “an old fashion revived”. [11]

I remember – but can’t find now – a cartoon showing two men talking: one is wearing a short, decidedly smock-like top and holding a power tool. He says to his (beer-bellied) companion something like “Well, I think you could do with a princess-line t-shirt, yourself.” And that’s the joke – that a man might wear a top that has the flaring outline more often seen on a woman, and still be blokey (and heterosexual) enough to use an electric drill.  Not that women can’t do that, too.

3- Alice Armes, 1950. English Smocks with directions for making them. The Dryad Press: Leicester