est. 1868: The fossil that fuelled a deadly disaster 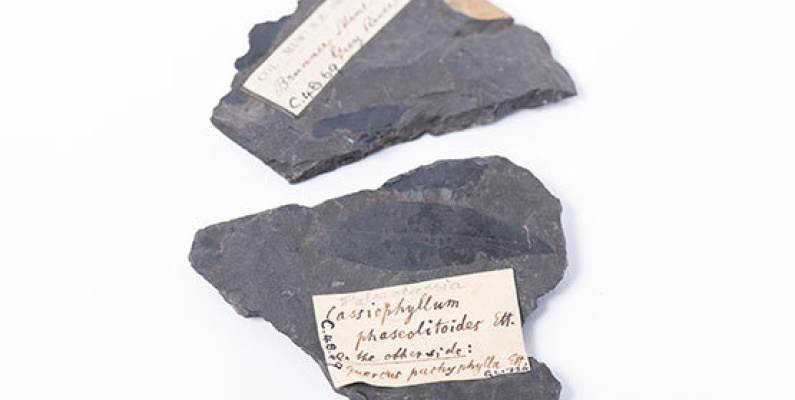 The worst workplace disaster in New Zealand occurred 123 years ago when an explosion tore through Westland’s Brunner Mine. The innocuous-looking fossil plant (Cassiophyllum phaseolitoides), on display in est. 1868, comes from strata from the Grey River where the Brunner Mine was located.

Piecing together the history of specimens in the Museum is a bit like one of those back-to-front jigsaw puzzles where the picture on the box is only a clue for the puzzle you put together. In this blog post, I’ll take you backwards through the available information for the fossil plant and explain, at the end, why it is in the deadliest category.

In 1948, the then director of the Museum, Henry Devenish Skinner, made several register entries: C.48.23 to C.48.69 inclusive, presumably in response to a request from Sweden to borrow the material. In the Annual Report we read: “Dr O.H. Selling of the Natural History Museum, Stockholm, was here for a short time examining fossil material. He borrowed for study in Stockholm the type specimens of Von Ettingshausen work, and overhaul of which is long overdue." [1] Olof Selling had recently completed a thesis on the Quaternary palaeobotany of Hawaii and was at that time employed at the Naturhistoriska riksmuseet. [2] Why he was interested in older fossil plants from the other side of the world remains obscure and he does not appear to have published research based on the loan.

The fossils are possibly the best travelled in the Museum’s collections. 64 years earlier they had been on loan to a palaeobotanist in Austria ­– the wonderfully named Dr Constantin Baron von Ettinghausen, who had, as he put it, “had the good fortune in 1884 to receive two collections of fossil plants from New Zealand, for which I am indebted to the kindness of Professor Dr Julius von Haast, of Christchurch, and Professor T.J. Parker, of Dunedin”. [3] He had borrowed the specimens for the purpose of naming them. Ettingshausen also sent some of his own fossil plants and nature printings of leaves to the Otago Museum. [4] Perhaps it was this extra material that accounts for £4.0.0 expenditure in 1885 against Ettingshausen’s name, or perhaps not – another puzzle! [5]

Ettingshausen wrote a detailed and well-illustrated 72-page account for the annual Transactions of the New Zealand Institute. [6] Here he described a new species, Quercus pachyphylla, from the Brunner Mine. The description is only four and a half lines long and written in Latin, common practice at the time. Ettingshausen also recognised some similarities with the fossil Quercus from Australian and European Tertiary floras. [7] 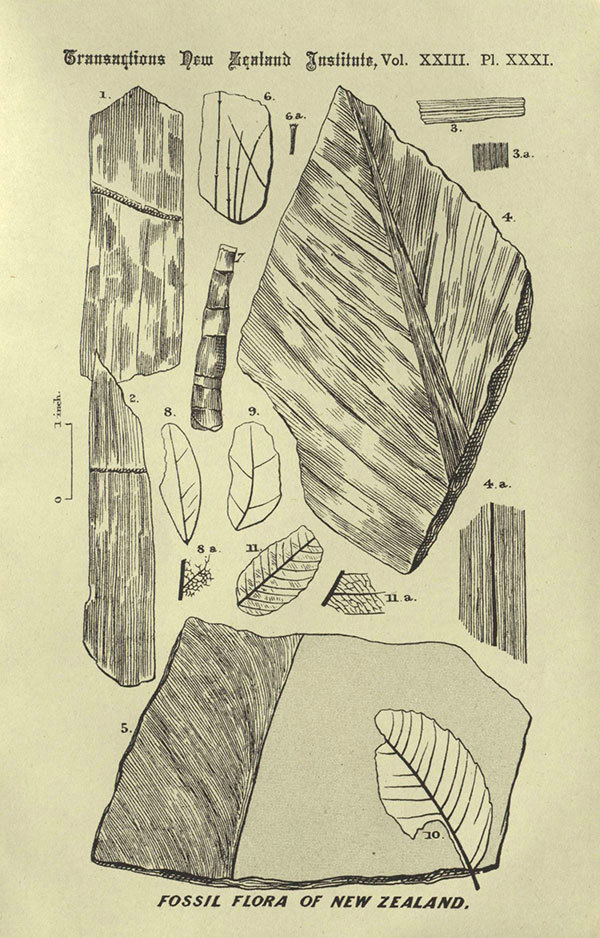 Image: Ettingshausen's new species Quercus pachyphylla – figures 8 and 8a – illustrated in the 1890 volume of the Transactions of the New Zealand Institute. Public domain image.

Modern understanding of New Zealand’s fossil flora recognises that whilst some individual species may have counterparts in the living flora, overall the vegetation was very different. When the sediment which has preserved the oak-like leaves was laid down, the area was lush, wet forest and swamps, with many lakes and rivers. The coal deposits of Westland, like others worldwide, are clear evidence of low relief and a gentle rolling topography. In New Zealand’s geological history it was a relatively quiet period. After the upheaval and splitting up of the mega-continent Gondwanaland, the smaller Zealandia continent (now mostly submerged) “behaved like a large, inert blob of cream, riding slowly and sedately across the surface of the earth in a north-easterly direction”. [8]

The original swampy plant material that forms coal bears little resemblance to plants. It is squished, squashed and subjected to high pressure forces that generally destroys the plants, leaving a solid black carbon mass – seams of coal. Zealandian coal underpins the coal industry in New Zealand and wherever it was easily accessible it was mined.

This specimen was collected in Westland in 1862. James Hector was employed by the Otago Provincial Council as a geological surveyor between 1862 and 1865. The Museum acquired his collection of rocks, minerals and fossils, and the Geological Survey label is clearly visible on the specimen.

So what’s the connection to deadliest? Well, admittedly it’s slightly tenuous. But it does come from Brunner Mine, presumably from mudstone rocks surrounding the coal seam. Thomas Brunner discovered this seam in the gorge in 1847 and mining began in 1864. Like others in the Greymouth coalfield, the mine produced high quality bituminous coal for over 40 years until it was closed in 1906.

On the morning of 26 March 1896 an explosion ripped through the mine. 65 bodies were brought out after five days of rescue efforts – almost half the underground workforce. Despite the tragedy production continued, reaching its height in 1901 when 300 men and boys were employed.

The official enquiry concluded the explosion was caused by a charge detonated by an unknown person who was in a part of the mine where they shouldn’t have been. However some miners disputed this and believed it was caused by “an outburst of ordinary firedamp”. Firedamp is the miner’s term for methane gas that had on this occasion, they suggested, accumulated to excessive levels because of inadequate ventilation.

[3] Constantin Baron von Ettingshausen, “Contributions to the Knowledge of the Fossil Flora of New Zealand,” Transactions and Proceedings of the New Zealand Institute 22 (1890): 237-49.