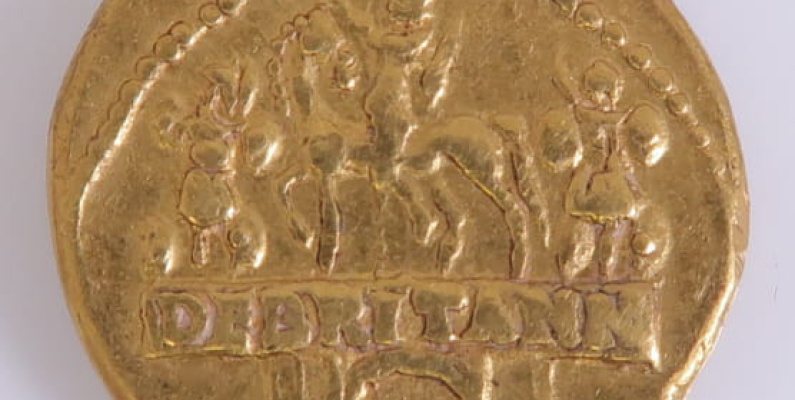 31 October has been designated as World Cities Day by the United Nations. The Day is expected to promote interest in urbanization. A major aspect of any city are its public buildings, which reflect much of its society’s values. Civic buildings, monuments and amenities mark every town in New Zealand. But imagine these same towns without these structures, or just traces of their foundations to mark where they used to be but giving little indication of their once impressive form. Think of Waikouaiti or Milton without their distinctive First World War memorials: the first a passageway with pointed arch set over the footpath, the names of the fallen soldiers set on the faces of the two substantial piers; the other a six-sided memorial stone listing the dead, protected by a tall Neoclassical baldachin topped by a floral symbol (anthemion). Both reflect Classical influences, which were seen as symbolising virtues of stability, solidity, and civic pride. But could you reconstruct these with just the foundations at best remaining?

One of the ancient world’s greatest cities, in terms of size and influence, was Rome. But the state of ancient Rome as we see it nowadays looks like just a jumble of stones to the uninitiated. How can we re-imagine it, and so put ourselves in a situation where we can fairly assess the city, its impact on people, and people’s impact on it?

Ever since the Renaissance one of the resources that archaeologists and historians have used to help reconstruct the appearance of ancient Rome have been Roman coins. The 14th century Italian poet Petrarch used coinage alongside classical literature as an historical source to help correctly identify ancient buildings and portraits.

This is not to say that coins can be consulted as if they represent naively what the eye would have seen. The images on coins – whether of buildings, people or concepts – reflect distinct choices made by several players in the manufacture (the state or city leaders, the mint master, the die carver) and a variety of influences, some of which we can discern (political, religious, artistic), but others that escape us (political, religious, artistic!).

We can see some of the advantages of using Roman coins to re-imagine ancient Rome through some of the coins in the Classical collections of Otago Museum. But keep in mind how small the field of design is, how schematic the resultant images must be, and what choices have been made about what to show. 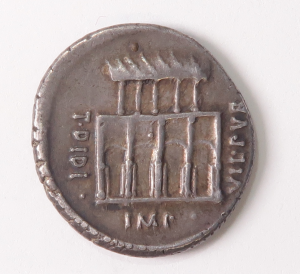 On the ‘heads’ (obverse) side, not shown here, is a head of the personification Concordia and the inscription P FONTEIVS CAPITO III VIR CONCORDIA. This inscription helps us understand the reverse side, because it tells us the name of the moneyer who minted this coin, Publius Fonteius Capito.

This silver coin dates to 55 BCE. It has on its ‘tails’ (reverse) side an image of a building, with the words T DID, VIL PVB, and IMP inscribed around three sides. T DID refers to Titus Didius, who was consul (one of the two top civic magistrates in the Roman state) in 98 BCE, and who was awarded two Triumphs for victories in battle, for which he would have been hailed as ‘Imperator’ (the IMP in the inscription). He was also the restorer of the Villa Publica, which is illustrated and identified by inscription (VIL PUB). The building is shown as having two storeys, with columns and arched gateways on the ground floor, and a pitched roof covering the upper. This is as much as we know about the appearance of the building, since nothing at all remains now, so the coin image is valuable even if it provides just a hint of the scale of what was apparently a magnificently appointed building. Originally built in 435 BCE, it was the only public building set up on the Campus Martius, outside the city proper, before the end of the Republic. The name ‘villa’ would normally signify a building in the countryside, and as such would usually have had connotations of being a farm property, but this was not the case here, as is made clear by the scholar Varro in his book on farming, written in the 30s BCE, where he makes clear that instead the Villa Publica was used by the censors, who conducted the census of the Roman population. It also served as a guest house for foreign diplomatic embassies, and as a recruiting office when troops were being raised. The Villa also provided lodging for generals returning from war until the approval of a Triumph was decided, so Didius himself may have lodged here awaiting the acclamation of his own triumphs.

Visitors to the Roman Forum nowadays (or when travel is able to start up again!) can see three large arches preserved in different parts of the space: the Arch of Constantine near the Colosseum, the Arch of Titus up the road into the Forum not far away, and at the far end of the Forum, the Arch of Septimius Severus. The earliest of these is the Arch of Titus, built after 81 CE by the emperor Domitian after the death of Titus, his brother and predecessor on the throne, to commemorate Titus’s capture of Jerusalem in 70 CE. (But wait there’s more: the remains of another Arch of Titus were excavated in 2014 – 2015 at the southern end of the Circus Maximus, over the hill from the Forum!) 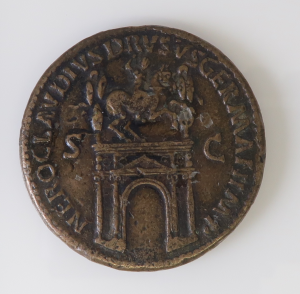 The Arch of Titus at the Forum is a relatively simple single archway, in contrast to the triple archways of Septimius Severus and Constantine. It gives us some idea of the appearance of similar single-arched monuments built by the emperors Claudius and Nero to commemorate military victories for which no remains survive. Again, we rely very much on the coins to gain an impression of what they looked like.

A coin, dating to 42 CE or later, from early in the reign of Claudius (41 – 54 CE), provides a representation of a memorial to Claudius’ father, Drusus, who was brother to the emperor Tiberius (14 – 37 CE). We see a single arched monument, topped by an equestrian statue that rears up between two trophies of captured weapons and armour. These point to Drusus’ multiple victories in Germany between 12 and 9 BCE. He was a popular figure in his lifetime, and his early death, from a fall from his horse while in Germany, was a huge loss to the army and his family. 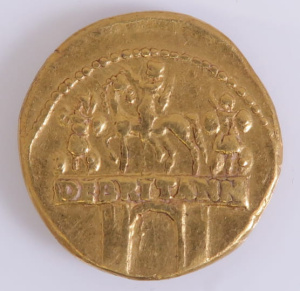 Claudius’ own victory in Britain in 43 CE – small though it was, as it encompassed only the south and east of the island, and he didn’t conduct the expedition himself, unlike his father – was commemorated by the Roman Senate with two triumphal arches, one in Gaul from where the expedition started out, the other in Rome itself. A series of coins of different values also memorialised the victory, among them this beautiful gold aureus. On the reverse is pictured the upper part of the triumphal arch, with the attribution to the British victory signaled by the inscription DE BRITANN at the attic level above the arch, while above this an equestrian statue steps out to the left, between two trophies of armour. 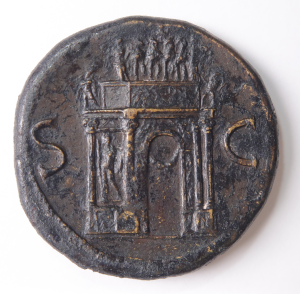 Our third lost arch is represented on a coin from the reign of Nero (54 – 68 CE). It dates to 64 CE or later, but the victories it commemorates go back to 58 CE, at the start of a war between Rome and her eastern neighbour, Parthia, fought over control of the state of Armenia. The conflict began with victories to Rome. Nero himself, who had not been personally involved, was voted statues, arches and successive consulships. So, our coin must illustrate one of the arches – or perhaps even all of them in a single, idealised model: we cannot tell for certain, as nothing remains in Rome. But the celebrations and commemorations were premature, for by the time the coin was struck, the tables had been turned: in 62 CE Parthia inflicted a humiliating defeat on Rome. And yet, as the historian Tacitus notes, notwithstanding the loss, trophies and arches were erected on the Capitoline hill in Rome.

This time the arch is much more elaborate than those on the earlier coins, even though it is still just a single passageway. A wreath hangs across this central passage, while in a niche to the left stands a statue of Mars holding spear and shield. Above the arch, the attic level is decorated with reliefs, and two free-standing statues of soldiers stand to left and right. Above this level, on the top of the structure stands a four-horse chariot (a quadriga), flanked by the personifications of Peace on the left and Victory on the right. If the coin represents reality, however schematically, it shows how much we are missing in Rome, where many such arches were dedicated over the centuries.

Our last coins reflect the peace settlement that followed from negotiations between Rome and Parthia to resolve their dispute over control of Armenia. In the end that control passed back to Rome, and the king of Armenia, Tiridates, travelled to Rome in person in 66 CE to receive his crown from Nero, who then used the occasion to gain further kudos by ordering that the doors of the shrine of Janus in Rome should be shut. This was a highly symbolic move, as the closing of these doors was a sign of peace over the whole Roman world, and a rare event. 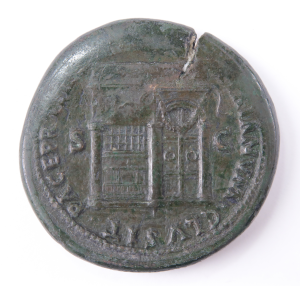 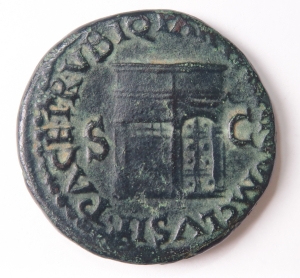 The shrine was essentially an arched passageway with doors at each end. The differently sized fields of the two coin faces give us two slightly different images of the shrine. On both the shrine is presented at three-quarter angle, so that we can see a door closed across the archway, and a longer side wall. On the sestertius a wreath hangs from the upper attic level across the top of the door; a latticed window punctuates the side wall about halfway up. On the as there is no wreath, and the latticed window has only two levels of windows, not the three on the sestertius. It’s a minor detail, but a reminder that these coins can only represent so much, and cannot be taken as absolutely accurate images of the built reality. Nor, curiously, do they align with the political events that are here commemorated, as the coins of this type appeared from 64 CE, whereas the closing of the doors took place in 66. Perhaps there was a repetition to mark Tiridates’ trip to Rome.