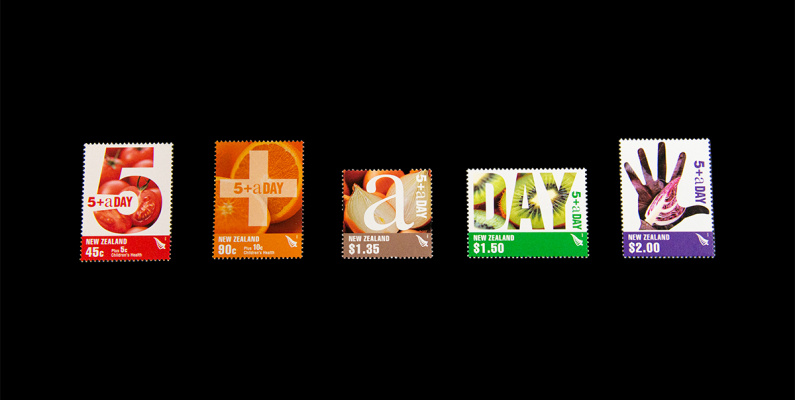 Horticulture began in New Zealand in the fourteenth century when the Polynesians (Māori) arrived in their waka with taro, gourds, kūmara, yams and possibly several other food plants, only a few of which would grow in our cooler climate.In the first two hundred or so years, Māori spread across New Zealand, hunting moa, other large birds and seals, and establishing gardens where they could. One of the first European settlers, Samuel Marsden, brought apples to Northland in 1819. He may not have been aware of the English proverb “an apple a day keeps the doctor away” which appeared in print in Britain in 1866 advocating that the eating of fruit maintains good health. It is not surprising then, that New Zealand’s first three stamps depicting fruit featured apples namely. the 1936 Chamber of Commerce 4d showing an apple packing shed and a picker; the 1956 set of three health stamps all showing a boy and a girl under an apple tree; and the 1968 export stamp depicting some apples and an orchard. 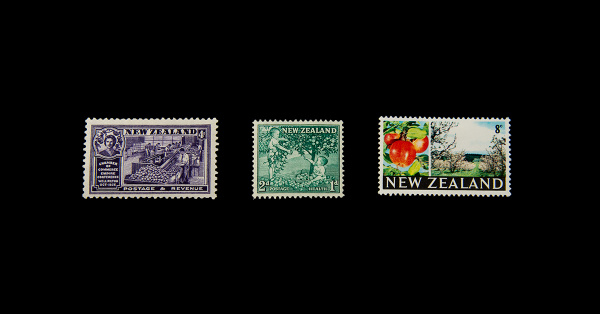 A design competition for the 1956 health issue conducted by Post Offices attracted over 100 designs from 44 individuals. None of the submissions were suitable as most lacked any association with children’s health. The head of the Post Office Stamps Division then found a photograph in the Auckland Weekly News of two children playing under an apple tree. This photo was taken by the children’s grandfather and the stamp design was developed from it. 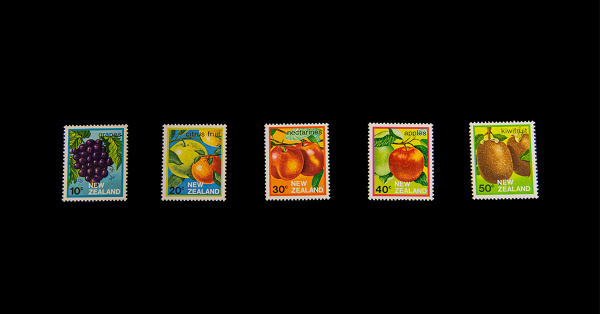 Grapes featured on the 10c stamp were grown mainly in Poverty Bay, Hawke’s Bay, Marlborough, and Auckland. Wine making began in the north in the nineteenth century.  Three types of citrus fruit – tangelo, lemon and grapefruit– are shown on the 20c stamp. New Zealand imported most of its citrus, but export of tangelos and lemons was increasing. The 30c stamp features two varieties of nectarine with the most important, Fantasia, in front and Red Gold behind. New Zealand’s second largest earner in horticulture was apples, and two varieties the old (Granny Smith) and the new (Braeburn) are on the 40c stamp.

Many people believe that the true essence of New Zealand is seen in the initiative of its small towns. Many of these communities are fiercely proud of their identity, and have made powerful visual statements to inform passers-by. In 1993, 40c stamps showing ten icons included the huge slice of Kiwi Fruit found in Te Puke, ‘the Kiwi Fruit Capital of the World’ and the 9-metre carrot of Ohakune, where two thirds of all the carrots in the North Island are grown. A later issue of Legendary Landmarksstamps in 2014, featured the large apple, pear, peach and apricot sculpture of Cromwell, the centre of stone fruit orchards in Central Otago. 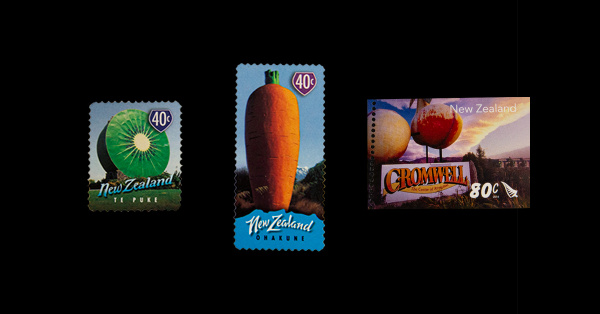 One of New Zealand’s greatest horticultural successes is the development of vineyards and wine production. The grapevine found its way here soon after the arrival of French and English missionaries.  However, it was not until the 1980s that the country began to produce wine capable of exciting the palates of wine lovers worldwide. In 1997, the nation celebrated the diversity and beauty of our vineyards on a set of six stamps. 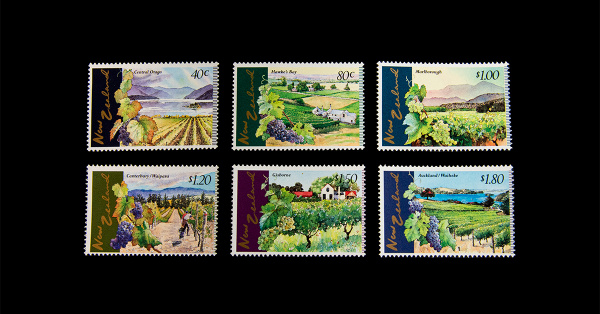 The 40c stamp features the beautiful Rippon vineyard perched on the edge of Lake Wanaka, one of many stretching from Alexandra through Cromwell and Bannockburn to Queenstown and which are becoming famous for their excellent pinot noirs. Hawke’s Bay is shown on the 80c stamp and it features John Buck’s Te Mata Estate,celebrated for its red wines,while the whole region is well known for its chardonnay. Marlborough’s Cloudy Bay vineyard is shown on the $1.00 stamp and this area is known worldwide for its sauvignon blanc. The $1.20 stamp features Canterbury/Waipara and shows the largest vineyard in the region at Pegasus Bay,where quality red and white wines both abound. Gisborne is a wine grower’s paradise and is well known for its chardonnay and gewürztraminer, and the Millton Vineyard appears on the $1.50 stamp. Last, but not least, is the Auckland area featuring a Waiheke Island vineyard where the Goldwater Estate has won several international awards.There are several both large and small vineyards in Auckland city and in the picturesque countryside to the north.

A subtle change in the design of fruit and vegetable stamps took place in the first 20 years of the 21st century, namely the development of advertising their health benefits as well as their beauty. In 1994, New Zealand joined a global campaign encouraging young people to eat colours and be healthy. The “5 + a Day the Colour Way” programme suggests three servings of vegetables and two of fruit a day which allows our youngsters to get the vitamins, minerals and phytochemicals they need to stay fit and healthy. It’s fun as well as being delicious and nutritious. The stamps proclaiming the campaign message were issued in 2006,and the 45c and 90c denominations were designated Health Stamps, and carried 5c and 10c surcharges for Children’s Health Camps. 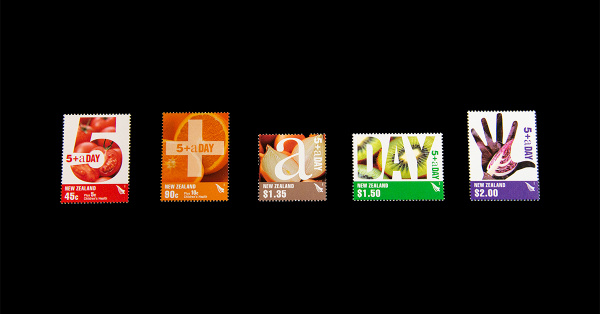 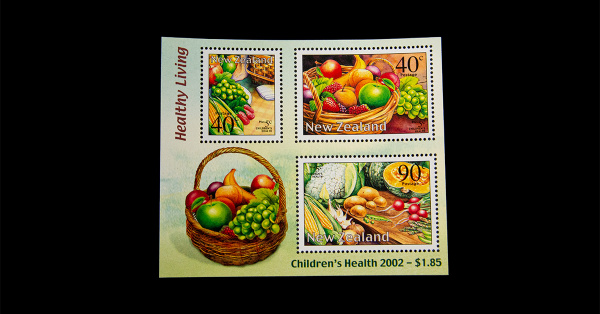 One of the 40 +5c stamps shows an array of fruits, while the 90 + 5c features a variety of vegetables, including sweet corn and potatoes.  The other 40 + 5c shows a basket of fruit with berries, bananas, and grapes.

The 2014 Health stamps celebrate healthy foods, and the 10c surcharge on each of the three stamps was given to “Stand Children’s Services Tu Maia Whanau” to aid the valuable service it provides to children and families in need. 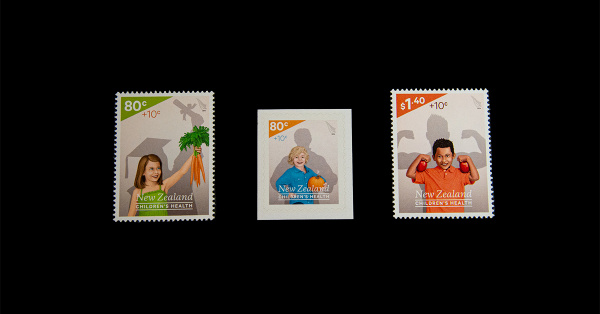 The 80c stamp depicts a young girl proudly showing her harvest of carrots and the second 80c stamp shows a young man with a pumpkin which contains beta-carotene, a valuable anti-oxidant important for good eyesight. The $1.40 stamp shows a happy, young boy with apples he grew himself.

Finally, in 2017, in an issue containing six stamps, we were encouraged to grow our own herbs and vegetables. The stamps were designed to look like markers for the rows in a vegetable garden. 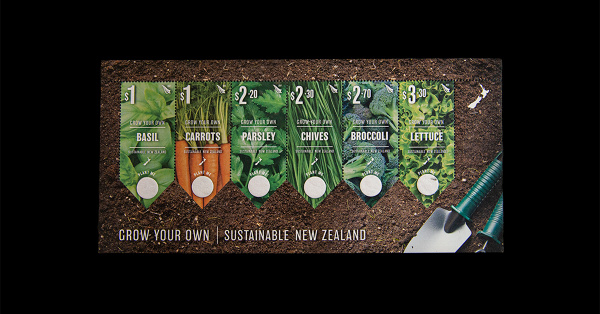 The herbs were basil, parsley, and chives, and the vegetables were carrots, lettuce, and broccoli. All of these can be grown outside, but the herbs are often grown indoors on kitchen window sills. The stamps on the First Day Covers in the presentation pack had little pouches on each stamp containing their seeds.