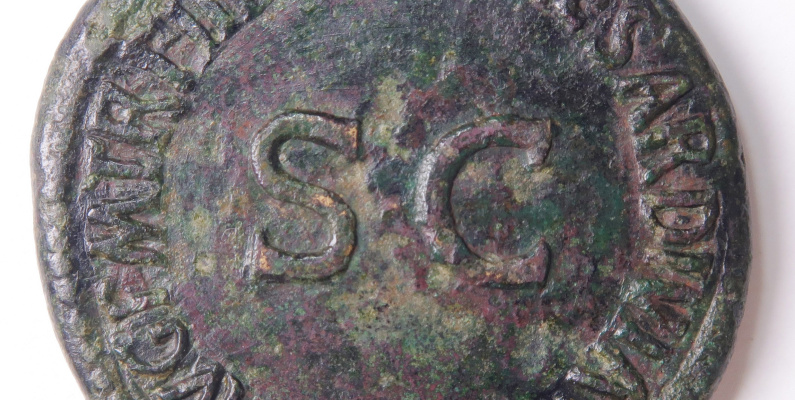 Gaius Caesar Augustus Germanicus, more commonly known as Caligula, was the third Roman emperor of the Julio-Claudian dynasty. When he succeeded Tiberius, he was 24 and ruled from 37 to 41 CE. Because of his young age, he had little experience in military and political affairs. Nevertheless, to promote his claim to rule, he minted coins for his deceased father, mother, and two elder brothers. Another reason for honouring these dead relatives was to rehabilitate their memory after the poor treatment they received from Tiberius during the later years of his reign.

Tiberius was very disparaging about Germanicus', Caligula's father, military successes labelling them as "insubstantial" and "crippling to the state" (Suetonius, Tiberius, 52); he also complained to the senate about him. Consequently, Tiberius was a suspect in Germanicus' death. These suspicions were confirmed when he was found responsible for the cruel treatment experienced later by Caligula's mother Agrippina the Elder, and brothers Caesar Drusus and Caesar Nero (Suet. Tib. 52). Furthermore, as a child, Caligula had accompanied his father on campaigns (Suetonius, Caligula, 9) and would have had firsthand knowledge of his father's ability and success on the battlefield. 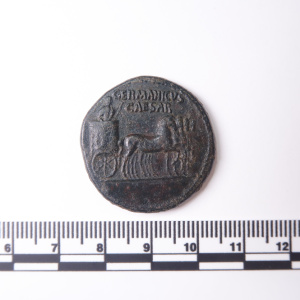 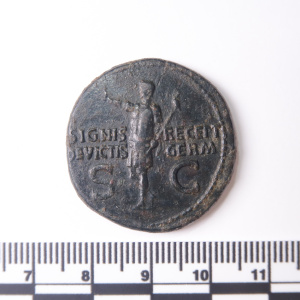 The coin above focuses on one of Tiberius' greatest military successes, the recovery of lost military standards, a banner attached to a pole that identified a unit, and their return to Rome. Publius Quinctilius Varus lost three standards when the Roman army was defeated in 9 CE at the Battle of Teutoburg. Germanicus reclaimed two of these standards during a campaign in 17 CE. The return of these standards redressed the shame Rome experienced caused by their loss.

On the obverse side, the legend "GERMANICUS CAESAR" clearly identifies the figure riding in a quadriga as Germanicus Caesar. The figure holds an eagle-tipped sceptre in his left hand; a general held this during his triumph. The reverse side's legend, "SIGNIS RECEPT DEVICTIS GERM", states, "Standards Recovered. Germans Defeated." Also, the letters "S C", the abbreviation for "SenatusConsulto", on this side of the coin indicates that it had the approval of the Roman senate. The figure is holding an aquila, a military standard, in his left hand and raising his right hand.

The dupondius was a low denomination coin. Consequently, it would be used by more people than a higher denomination coin, thus providing a greater audience for its message. In addition, Caligula's use of his father's legacy on this and other coins connects him to a very successful and well-liked Roman general. Caligula's twofold message of countering Tiberius' disparaging comments regarding his father's military successes and the implication of 'like father, like son' both honours his father and suggests that he has what it takes to be emperor.

Tiberius had Agrippina the Elder, and Nero Caesar and Drusus Caesar declared public enemies. Tiberius exiled Agrippina the Elder to Pandateria, where she, at one stage, was so violently flogged on Tiberius' command that she lost an eye. Eventually, she starved herself to death (Suet. Tib. 53). Nero Caesar and Drusus Caesar were to be starved to death. It is believed Nero Caesar was forced to take his own life after an executioner visited him with a noose and hooks as if he was about to be executed. Drusus Caesar survived for a while by eating the stuffing of his mattress but eventually died through starvation. The remains of both were dispersed, making it almost impossible to collect their parts(Suet. Tib. 54).

On becoming emperor, one of Caligula's first actions was to go to Pandateria and the Pontian islands to collect the ashes of his mother and brothers and return them to Rome for proper burial (Suet. Cal. 15). 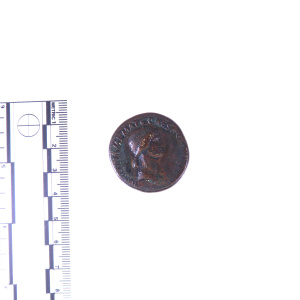 On the obverse side is a bust of Agrippina with the legend "AGRIPPINA M R MAT C CAESARIS AVGVSTI," identifying her as the daughter of Marcus (Agrippa) and the mother of Gaius (Caligula). On the reverse side, the legend framing a carpentum, a two-wheeled enclosed carriage enclosed used to convey the Roman matrons in the public festal processions, drawn by two mules reads "MEMORIAE AGRIPPINAE", meaning ‘for the memory of Agrippina’, and also includes S(enatus) P(opulus) Q(ue) R(omanus), “The Senate and Roman People”, an extremely common abbreviation found on inscriptions, coins, and other monuments throughout the empire. The carpentum depicted on the reverse side invokes the honour granted to her memory by Caligula, “circus games for his mother, and a carpentumin which she might be transported in the procession.” (Suet. Cal. 15).

The genealogy of Caligula's mother played an essential role in his drive to portray himself as worthy of being emperor. His mother was directly linked to Augustus, identifying him as Augustus' great-grandson. 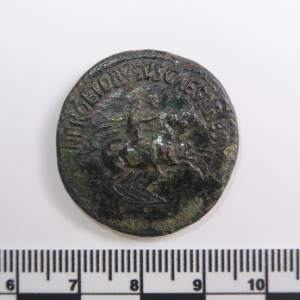 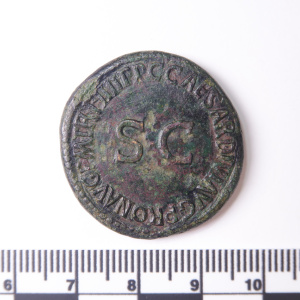 The legend on the coin's obverse side, "NERO ET DRVSVS CAESARES," clearly identifies the two riders on the rearing horses as Caligula's deceased brothers, Nero Caesar and Drusus Caesar. The legend on the reverse side is "C CAESAR DIVI AVG PRON AVG P M TR P IIII PP", meaning "Gaius Caesar, Divi Augustus, Pronepos Augustus, Pontifex Maximus, TribuniciaPotestas IIII, Pater Patriae". The legend has Caligula's full name to emphasise his relationship with Augustus. Also, many of Caligula's political and religious roles are listed to reinforce his status in Roman society. Part of this legend, "TR P IIII", helps date the coin to 40-41 CE, when Caligula held Tribucian Power for the fourth time. The "S C" is in the middle of this legend meaning "SenatusConsulto", and conveys that the coin had the approval of the Roman senate.

The brothers are in a heroic pose with an arm raised, a well-known representation of the Dioscuri, Castor and Pollux from mythology. Caligula uses this representation to persuade the viewer that he had the same supportive fraternal relationship with his brothers as the Dioscuri had.

The coins showed how Caligula used the images of his father, Germanicus, his mother, Agrippina the Elder, and his two elder brothers, Nero Caesar and Drusus Caesar, to establish the legitimacy of his reign as emperor. However, the use of these family members also reminded Roman society of Tiberius' vindictive treatment of them and the suffering he inflicted on Caligula's family. Caligula also minted coins for his great grandfather, Augustus, and his sisters Agrippina the Younger, Drusilla, and Julia Livilla.