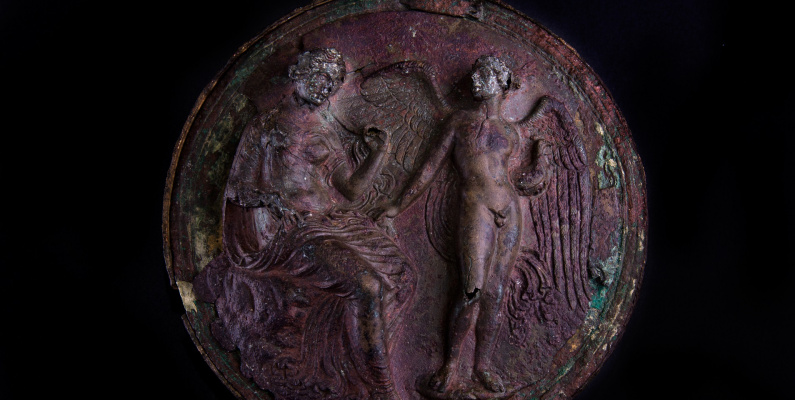 For all that the modern world likes to present ancient Greeks in sheets, often misnamed togas after the distinctively Roman garment, their dress code was much more versatile, to judge from representations on vases, sculptures, bronze and terracotta statuettes, and coins. It also changed in time and place, sometimes in response to foreign fashions.

Clothing could be fundamentally functional and therefore simple. A short tunic, called a chiton (pronounced ‘kít-own’), could be worn by both young men and women, especially to free up the limbs when engaged in physical activities like horse-riding, as we can see on this vase from Athens from the 6th century BCE: 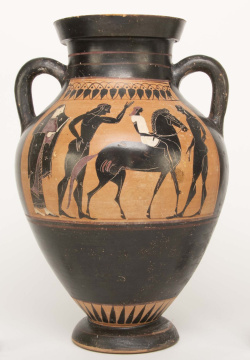 The young man in the centre of this part of a frieze on a 5th century vase from Athens is also wearing a chiton in a horsey context. Over his shoulders he has an extra layer of clothing in the form of a small cloak, called a chlamys (pronounced ‘klámis’), and on his head he has an animal-skin cap, with its legs hanging down over his shoulder. These added items suggest that he might be a foreigner, rather than an Athenian citizen. 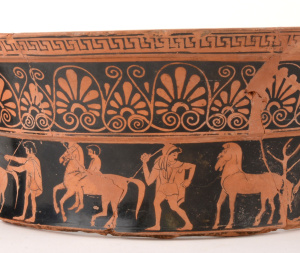 The chiton would have been made of linen. Indeed, as we know from both art and literature, even this small covering could be discarded by men completely in various contexts, notably sweaty work like ploughing on the farm, digging in the mines, athletics, and even in battle. 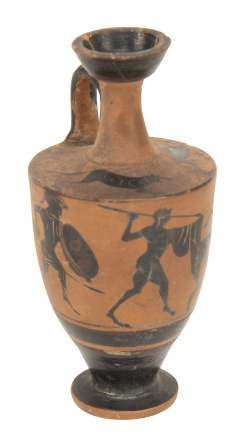 In all of these activities, clothing could become more of a hindrance than a help. We might easily think that near a hot, fiery furnace, clothing could catch fire, and you with it, so nudity could be practical. But although modern scholarship still thinks that nude warriors were a Greek fantasy and not reality, with the nudity designed to mark the fighters as superhuman ‘heroes’, it’s more likely that nakedness was a feature of actual combat even in the 5th and 4th centuries BCE. After all, think how little a tunic would keep you safe in close hand-to-hand battle, when your opponent could easily grab it to pull you closer to danger and death.

The range of activities mentioned just now shows how functional nudity, at least for men, crossed social barriers, from slaves to labourer citizens to aristocrats, and how we have to shed our modern (or Victorian) sense of propriety or shame when dealing with Greek nudity.

For women, on the other hand, public nudity was to be avoided, as it was associated with sexual activity or violence. In art the female nude became very much the preserve of the goddess of love and sex, Aphrodite. It could be full-on nudity, an innovation in sculpture attributed to the artist Praxiteles about 350 BCE, or it could be a curious mixture of naked flesh and almost disengaged clothing. We can see this best in the over-lifesized statue of Aphrodite known as the Venus de Milo, of which the Museum has a cast in the Peoples of the World gallery. Her torso is naked, and what little modesty she is left with is provided by a bulky cloak, called a himation, which we now have to imagine was held up around her hips by her missing right hand.

The himation (pronounced ‘him-át-eeon’) would be made of fine wool, woven into a large rectangular shape. It provided a heavier covering than that offered by the lighter tunic, over which it could be worn for more protection against the elements (for both men and women) and against prying eyes (for women out in public). It was usually not active-wear, but instead it would have slowed the wearer down because when worn properly (unlike Aphrodite!), it was held up simply by having one end pressed under one arm which was held close to the torso, while the other end was wound around the body and then draped up and over the other shoulder. More stately goddesses, like Demeter and Persephone, are shown wearing it over a close-fitting chiton on this 5th century vase that shows their presentation of the gift of agriculture (signified by a sheaf of wheat) to the Athenian hero, Triptolemos, seated in the centre of the scene on a winged chariot. 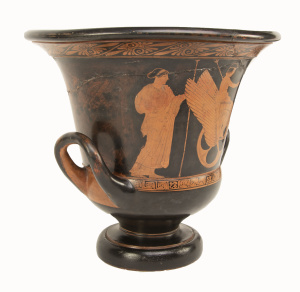 Even the god, Dionysos, who represents the wilder side of the Greek psyche, stands solidly swathed in his chiton and himation, while surrounded by dancing maenads, on this small oil flask (lekythos) of the early 5th century.

For all the modesty inherent in the double layered ensemble of tunic and cloak, Greek artists from the end of the 6th century BCE seem to have delighted in displaying the female form through the tunic by making the garment look diaphanous. The winged goddess of victory (Nike) is shown on this cast of a relief from the Temple of Athena Nike in Athens, raising her foot to put on, or take off, her sandal. Both chiton and himation might as well not be there, as the whole figure is strongly modelled through the garments. 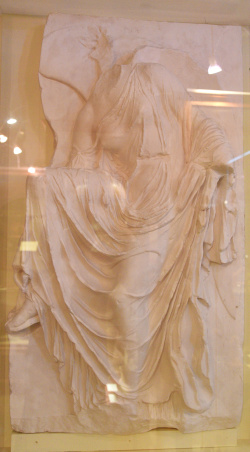 Figure 7: Cast of frieze from Temple of Athena Nike in Athens. L2016.1. On loan from and by permission of the Classics Programme, University of Otago. Original, 416-413 BCE, in Athens, Acropolis Museum

Aphrodite, this time accompanied by her son, winged Eros, wears the same clothing on a bronze mirror of the 4th century BCE. 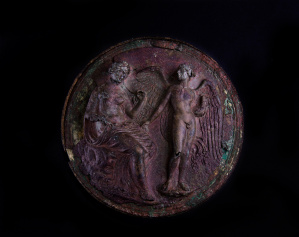 The mortal woman who grieves at the tomb of a warrior on a white-ground lekythos of the late 5th century BCE from Athens, would appear at first glance to be wearing completely see-through garments of this kind, but we probably should imagine them over-painted in colours that would hide the under-drawing of her figure. 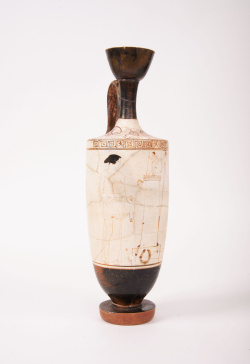 Later artists, from the 3rd century BCE onwards, paradoxically manage to use a heavy-looking version of this chiton-himation ensemble to display the active female form in small terracotta figurines, as can be seen in examples on display in the People of the World gallery, where the clothing is stretched tight against the women’s bodies as they swirl around. 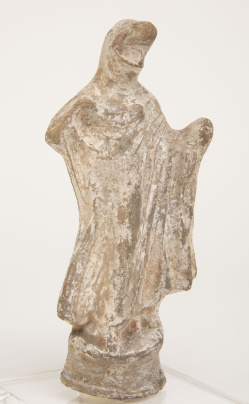 A wilder dancer, dressed less decorously but more decoratively, can be found to the right of this scene on an early 4th century Athenian vase, where she accompanies the entourage of Dionysos, who languidly drapes himself in the middle of a group of madly twirling maenads and satyrs. The maenad’s tunic is picked out with added patterns that probably represent what was woven into or sewn on real life tunics of less frantic females in daily life. The dancer pairs nicely with the text on display in Fashion FWD:

“Taking flight, wild imaginings are made

and fetters are scattered, …” 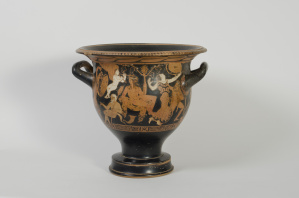 Women also had access to another form of outer garment, which represented an older fashion than the chiton+himation ensemble. This usually took the place of the himation, and was called a peplos. Imagine a long, rectangular piece of cloth like the himation, but with about a quarter of its long side folded over at the top to create a double layer. Make a tube of the cloth, and put yourself inside it, but this time use long pins to draw the front and back top edges of the cloth together over your shoulders. A simple belt could then be tied around the waist to pull the voluminous material into the body, although a slit would always be visible down one side – hence the need to wear a chiton underneath if you wished to preserve your modesty. This cast of a small statue of a young woman (kore) from the 6th century BCE in Athens shows a version of this combination of chiton and peplos, but with the peplos closely hugging her hips, and decoratively falling in zig-zag folds that end in a swallow-tail pattern. The whole statue would originally have been brightly painted in many colours and patterns, highlighting the garments.

Figure 13: Cast of Kore. L2016.11. On loan from and by permission of the Classics Programme, University of Otago. Original marble statue, about 530 BCE, in Athens, Acropolis Museum

In the world of modern high fashion, the new Dior Cruise 2022 collection features new versions of the peplos in designs by Maria Grazia Chiuri. The original form of the peplos with its distinctive overfold is still discernible in these examples, but Chiuri has innovatively adapted the garment to include a mini-dress, and even a sporty look complete with trainers for the feet. 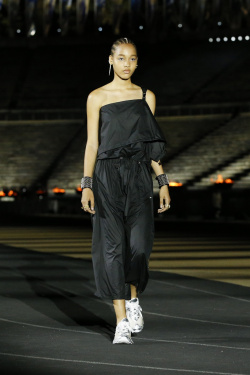 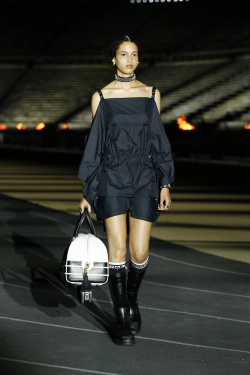 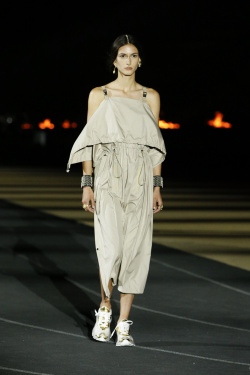 The himation could also be worn on its own by young men (older men would usually go for a chiton + himation arrangement for warmth). Here a couple of youths are caught in relaxed conversation, their cloaks enhanced with decorative trims, on a South Italian vase of the 4th century BCE. 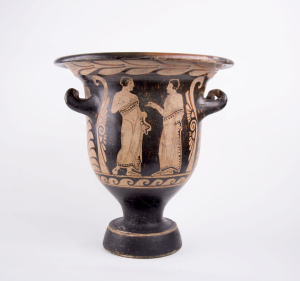 Finally, we find a few examples of short capes draped over the shoulders of women across the centuries. Here one is worn on a cast of a statuette of a young woman of the 7th century BCE (the ‘Auxerre goddess’, so-named from her inexplicable modern findspot in a museum in central France).

Figure 18: Cast of Auxerre Kore. L2016.12. On loan from and by permission of the Classics Programme, University of Otago. Original marble statue, about 640-630 BCE, now in Paris, Musée du Louvre

And here, a white cape is worn by a woman who is bringing offerings to a tomb for a dead youth, who stands to the left. However, this garment was a distinctive item of the indigenous Italian peoples among whom the Greeks lived in South Italy in the 4th century BCE. So too is the headgear that the woman wears. 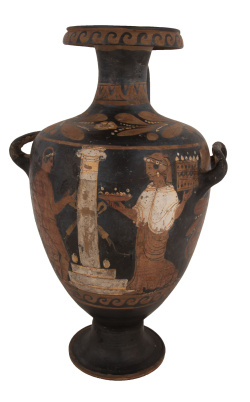 The Classical Collection therefore provides several images of ordinary Greek dress. Garments range from the ubiquitous light tunic (chiton) worn by both sexes, which allowed for freedom of movement, to the all-enveloping heavy cloak (himation), which restricted movement but provided warmth and modesty. There are some indications of decorative designs on the garments in the vase-paintings, and original marble sculptures occasionally retain traces of the colours and elaborate patterns that could adorn especially women’s clothing. Non-Greek garments can be found as well, such as the cape and headgear worn by women in South Italy, giving us a glimpse of a multicultural society in this part of the Mediterranean.