The taraire tree which grows in the Museum’s Great King Street garden has begun to fruit and you can see the large purple olive-like drupes among its thick, obovate leaves. Last year’s heavy fruit fall was noticed by the vigilant team at the Dunedin Botanic Garden who visited to forage around 100 of the ripe fruit. Once collected, the fruit were cleaned of pulp for inclusion in the 2018 Index Seminum which is offered to botanic gardens overseas. 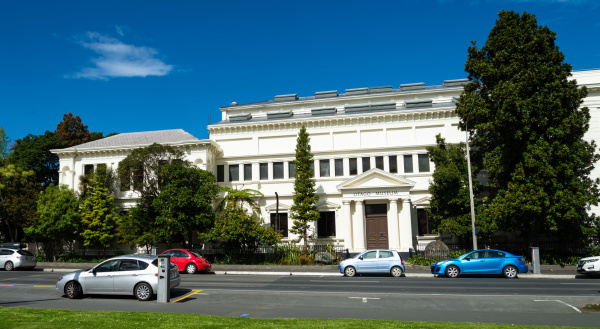 Image: The Great King Street garden outside the original entrance to the Otago Museum. By Kane Fleury Fleury © Otago Museum

Like museums and zoos, botanic gardens are more than just interesting places to visit. They play important roles in contributing to conservation and research. In this instance, botanic gardens are used as research references to help preserve Earth’s plant heritage. Accredited institutions like the Dunedin Botanic Garden are part of global network of botanic gardens which collect and distribute seeds to be grown and displayed. 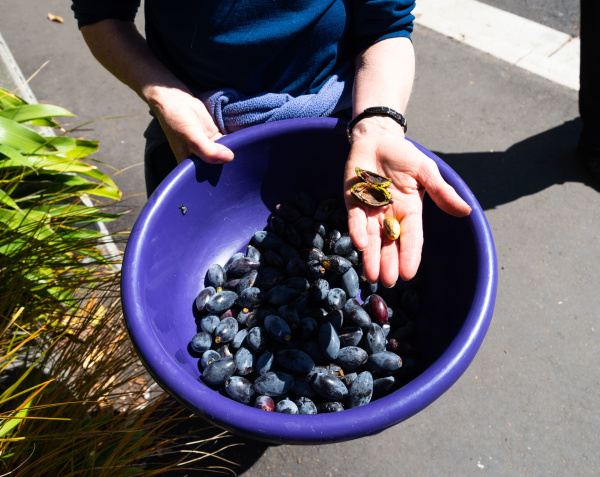 Taraire fruit are also described as drupes - a fleshy fruit with thin skin and a central stone containing the seed. By Kane Fleury Fleury © Otago Museum

Botanic gardens, along with seed banks, are one of the tools used to help safeguard against the plant species and variety extinctions, and to rear plants in order to better understand the taxonomy, variations, and the conditions they need to survive.

Although endemic to New Zealand, taraire are not native to Dunedin, and are normally found from the far North to as far south as Raglan and East Cape. Fruits ripen over the winter, and fall to the ground in spring [1]. Natural seed dispersal of the taraire rests on the dependable  feathery shoulders of the kererū (Hemiphaga novaeseelandiae), one of the  only native bird able to swallow the large 4 cm long fruit, and then digest them and pass viable 3 cm long pips [2]. In areas where kererū are sparse, there are conservation concerns for trees like the taraire. 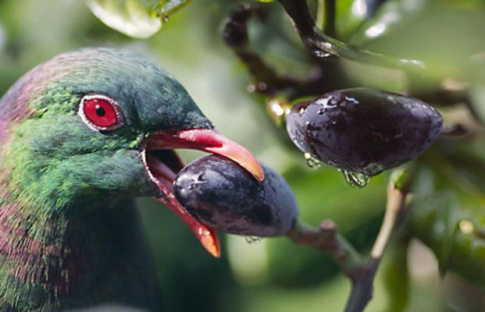 Taraire (Beilschmiedia tarairi) are naturally found in the understory of kauri (Agathis australis) forests communities in the North Island . The ground around the base of taraire are normally covered with a thick blanket of super-slow mulching leaf litter, preventing any upstart taraire springing up from fruit falls[3]. Kauri forests were once widely distributed throughout the top half of the North Island but logging and land use changes has seen them reduced to fragmented sites. Many sites are protected, but are under further ecological pressure from kauri dieback disease, a plant pathogen that infects the canopy giants, causing them to bleed resin, defoliate and eventually die[4]. Cultivation of taraire, kauri, and other native plant species provides specimens for study and survival of at-risk plant species.

The taraire is one of a collection of trees in the Otago Museum’s living collection that feature rare and/or southern-most examples of their species.