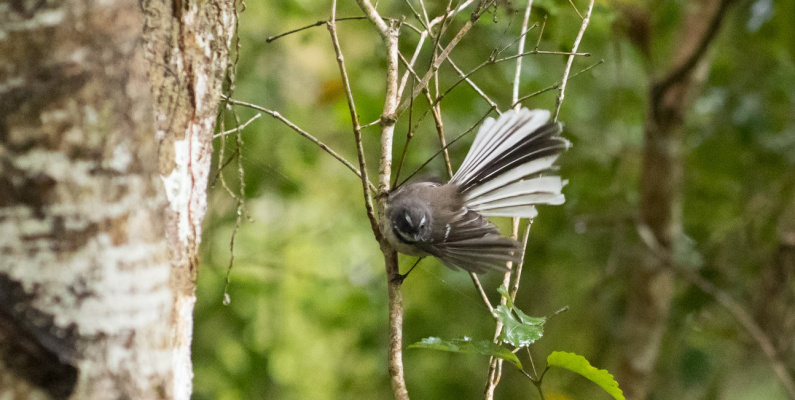 Guide to the most common garden birds of Dunedin

Dunedin is a paradise for bird lovers. There are so many great bird reasons to live in this city and it is only getting better with the predator trapping work in our community that the Halo Project and City Sanctuary support. So, while you have the time on your hands, why not see how many different birds you can spot from your home?

Here is a small list of the most common birds that you are likely to see in your garden in Dunedin. There are others, like kākā, seabirds, and ducks that you might see as well, depending on where you live.

These pigeons are many Dunedinites’ favourite bird to see about the city. They are large, loud swoopers with a crisp white breast. The feathers on the head, shoulders, and wings are a beautiful metallic green that can be tinged orange or purple, depending on the light. Kererū are incredibly important for spreading seeds from the fruit of native trees. They will also eat leaves, twigs, and berries. After a big feed they can often be seen sunning themselves while they digest their food. Sometimes, the fruit ferments in their crop (a storage pouch in the bird’s digestive tract) and they can become very drunk. 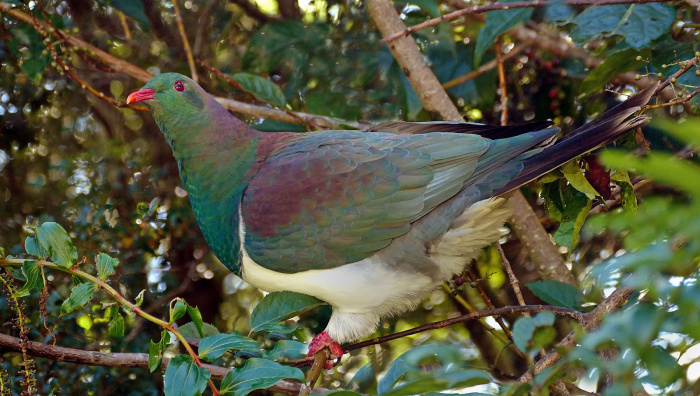 Tūī are dark-blue, green, and bronze birds with a distinctive white tuft of feathers (poi), and they are one of the songsters in your neighbourhood. Their song is different from their nectar-eating cousin, the korimako (bellbird), as it contains other sounds like clicks, cackles, groans, and wheezing. This variety of song is due to a dual voice box, which allows the tūī to make two sounds at the same time. Tūī have a highly varied diet that consists of nectar and medium-sized fruits, as well as large insects. They play an important role in native ecosystems as pollinators of many native species of plants, also spreading their seeds. Tūī can be very aggressive towards other birds when defending their food sources and can be extremely acrobatic fliers. 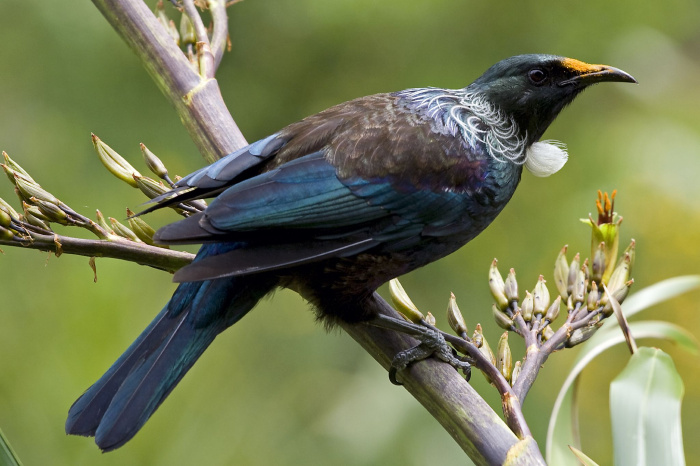 Korimako (bellbirds) are one of two species of nectar-eaters in New Zealand which are commonly found in our gardens, the other is the tūī. Korimako have a very melodious song that does not feature the guttural sounds of the tūī. Males are olive green with a purplish head. Females are browner than males with a white-yellow stripe from the cheek to the base of the bill. See if you can spot the difference. They have a narrow, curved beak and their tongue is like a brush which is good at reaching deep into flowers to extract the nectar. Korimako will also eat fruit and insects. 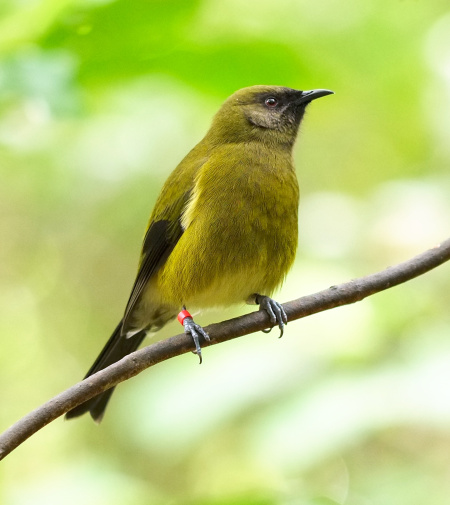 Tauhou (silvereye) are a small, olive green bird with a highly distinctive white eye-ring. They commonly flock around the sugar feeders of Dunedin, especially over the wintertime, and can consume a surprising amount of sugar water in a day. Tauhou bring a lot of drama to a bird feeder, which makes for entertaining watching. If you are feeding them you will often see confrontational behaviour, with the dominant tauhou fluttering its wings and performing short, aggressive chases of other birds. The tauhou naturally colonised New Zealand from Australia in the 1850s and has since become one of the most abundant birds here. Because it arrived of its own accord it is considered a native. 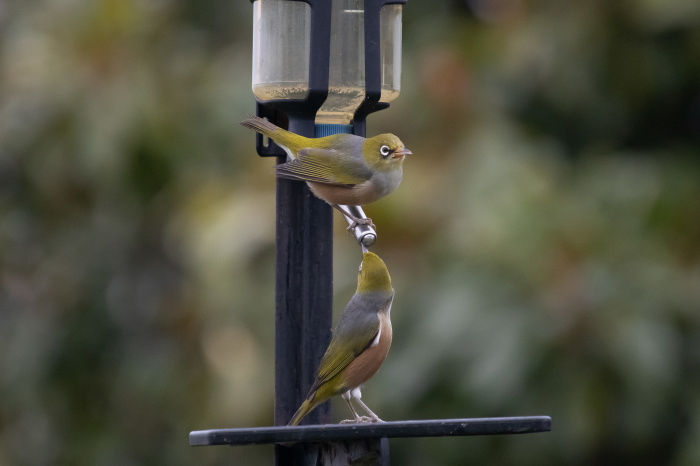 The greenfinch is the largest of the introduced finch species in New Zealand. As its name suggests, it is mainly green but has a yellowy tail and wings. The beak is distinctive as it is thick and conical in shape. Females are more dull in colour than the male birds and have a more brown appearance on their backs. They were introduced in the 1860s from Britain by acclimatisation societies and are common across most of New Zealand, although not in native bush. These birds mostly eat seeds, so if you stock a feeder with them you’ll likely get greenfinches coming to say hello. 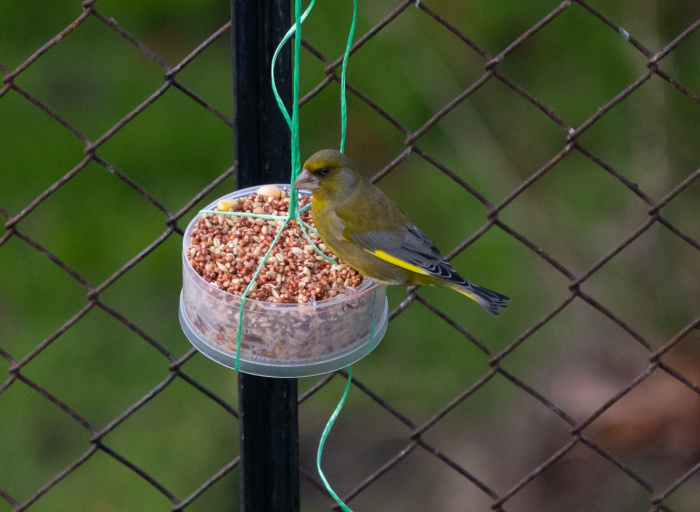 Blackbirds sing year-round in Dunedin and you will often hear their songs in the early morning and late evening. Typically, they will be the birds that you see perched high up on the powerlines or trees around your house. Since their introduction in 1862, they have become one of the most widespread of the exotic birds. The males are completely black, except for a striking yellow-orange beak and eye-ring, whereas the females and juveniles have a slightly mottled breast and are otherwise a more subtle dark brown (including their beaks). The females can easily be confused with the smaller song thrush that has a very obvious cream-coloured breast with conspicuous brown speckling. Blackbirds are omnivores, eating berries, seeds, insects, garden snails, and earthworms. You’ll often see them on your lawn hunting for worms or flicking leaves around looking for invertebrates. At this time of year, you may see males and females out collecting materials to build their nests (laying happens throughout the spring). 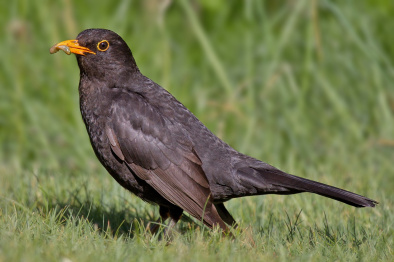 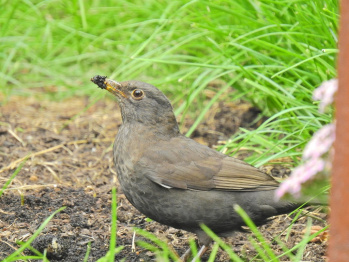 The song thrush is a medium-sized bird with a distinctive cream breast that is speckled with brown spots. Male and female song thrushes are alike in appearance, but they can sometimes be mistaken for female blackbirds. The female and juvenile blackbirds are generally larger, though, and have a brown breast that is not obviously speckled like the thrush. See if you can tell the difference. Song thrushes were introduced to New Zealand in 1867 from England and although they are found around Aotearoa they are much less abundant than their cousin, the black bird. They are generalist feeders and you’ll often see them rummaging through the leaf litter, hunting for invertebrates by sight. Spring is one of the best times of the year to listen out for their song too. 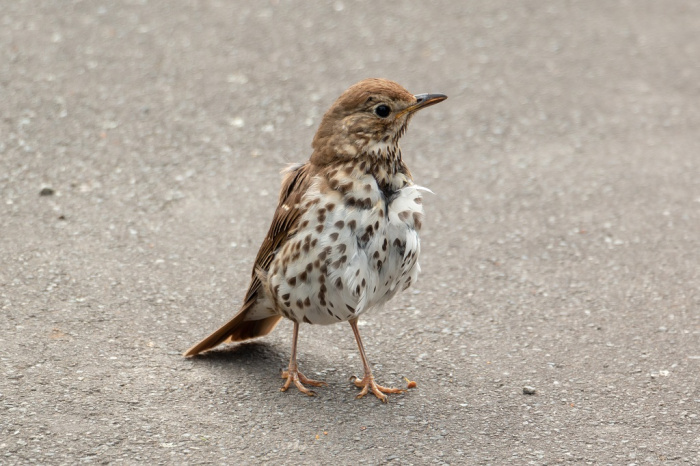 Starlings were introduced into New Zealand in 1862 to control insects that affect crops. Since then, they have become one of the most common birds to be seen in gardens. From a distance they can appear black, but up close they have beautiful, iridescent, purple and green feathers that are tipped with white. In the garden and the bush around Dunedin they will look hyperactive when they are searching for food. Their diet is mostly made up of invertebrates, but they will also consume nectar and are very partial to flax flowers in spring. They construct their nests in tree hollows, nesting boxes and in building cavities, such as chimneys. 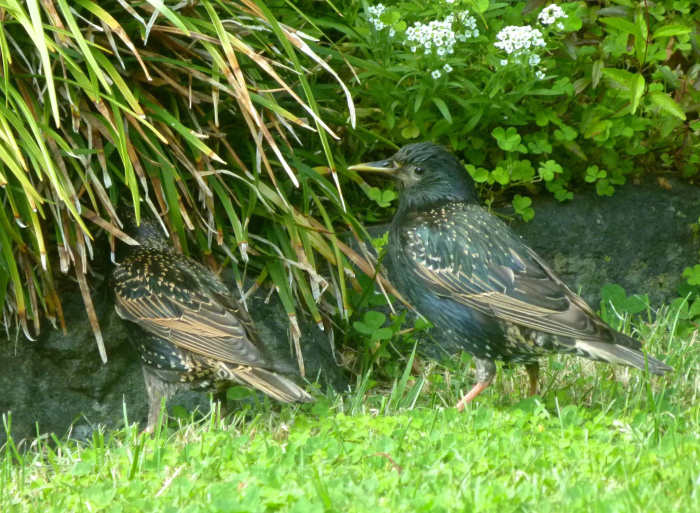 The house sparrow is the most widely distributed wild bird in the world. It was introduced to New Zealand in the 1860s. The males are chestnut-brown, white, and grey with a very distinctive “bib-shaped” black patch on their chests. The females do not have this “bib” and are greyer, with a lighter brown back colouration. The front parts of their body are plain grey and their backs and wings are variegated white and brown. The females and juveniles are easily mistaken for being dunnocks, which are smaller and have a more drab appearance. They make a very distinctive chirping sound. Sparrows are very closely associated with people, which is why as a species they have been so successful. Much of their diet in urban areas of New Zealand is bread, food scraps and seeds, although they will also eat invertebrates. They were introduced to help deal with agricultural pests but 20 years after their introduction, they themselves became regarded as a pest to grain and other crops. 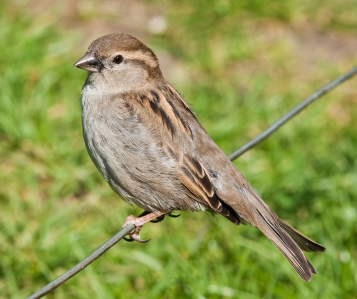 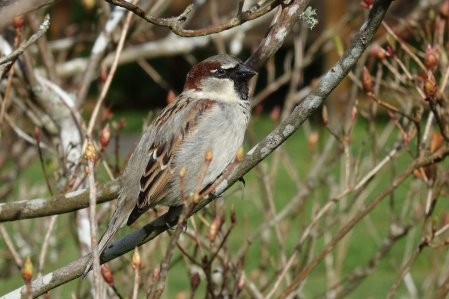 The dunnock (also called hedge sparrow) is often spotted foraging among shrubs, looking for grubs in leaf litter or amidst vegetation. They look very similar to female and juvenile house sparrows and are often misidentified. Dunnocks are smaller than house sparrows and have a more muted brown plumage that is streaked brown on the back and wings. They emit a high-pitched “tseep” sound that is common in the suburbs. Although they may be considered drab in appearance, their sex life is anything but. Depending on the number of birds in a territory and the make-up of males to females, Dunnocks can form polyandrous, polygynous or monogamous breeding relationships. The most common arrangement is polyandry, where a female will mate with a company of two or three males. Even ostensibly monogamous female dunnocks will regularly mate with multiple males during the breeding season and it is common for a nest clutch to be fathered by males that are not the mother’s social male partner. 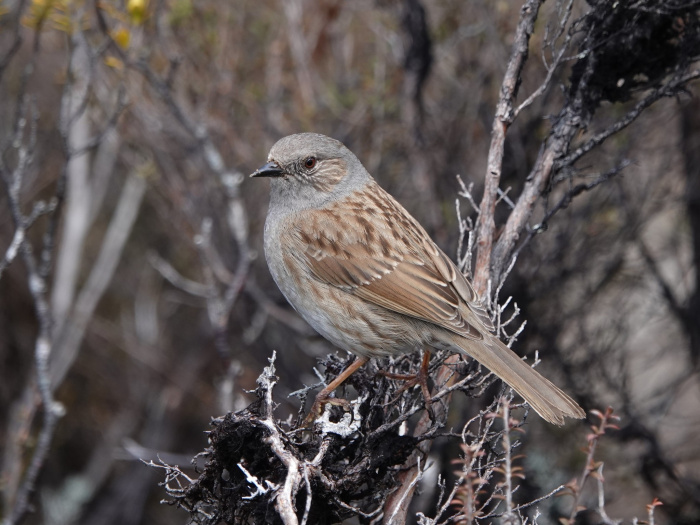 The pīwakawaka (fantail) is well-adapted to living near people and has a very wide distribution that includes exotic and native forest, parks with plenty of trees, and mature-treed gardens. They have a very distinctive call, which includes a high-pitched “cheep”. They also have a regular chattering call of “tweeta-tweeta-tweeta”. The pīwakawaka is our most easily identified garden visitor with its fan-like tail. There are two distinct colour forms. The pied form has a greyish head, a brown back, a cinnamon-coloured breast, and a belly with white and black bands. The second colour form is all black, except for a white cheek patch. Black pīwakawaka are uncommon in the North Island, but down in the South make up about five percent of the population. On very rare occasions, a fully white fantail will show up in a population too. Pīwakawaka mostly eat small invertebrates and sometimes small varieties of fruit. 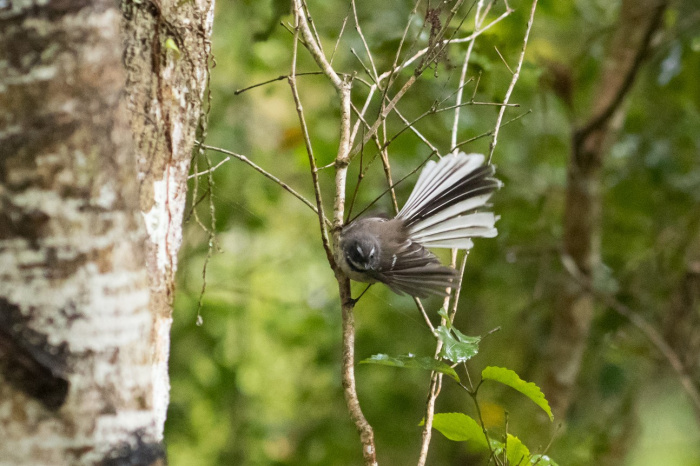 Goldfinches are brightly coloured seedeaters that were introduced to New Zealand from Britain between 1862 and 1883. They are smaller than a house sparrow and can occur anywhere there is not dense, native forest. They have a vivid yellow stripe on their wings and the adults have very distinctive bright red, white and black facial feathering. There are only subtle differences between the male and female appearances. They often occur in flocks which can become very large. They form monogamous pairs and defend their territory. During spring, you will hear the males’ song telling other goldfinches this spot is occupied. 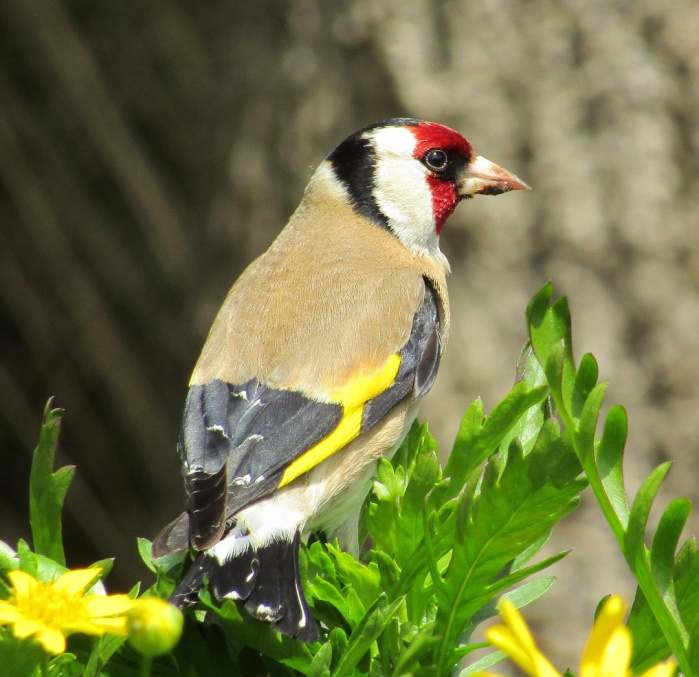 The common redpoll is the smallest of the finch species that occurs in New Zealand. It has a distinctive red cap on its head and brown, streaky body plumage. Males who are a couple of summers old will often have red that extends down onto their chests, but young males will appear similar to females. Redpolls were first introduced into New Zealand in 1862 and have become abundant in the South Island. Their diet is largely composed of small seeds, mostly from grasses and introduced plants (e.g. birch and alder). They will also eat insects and the fresh buds from plants in the late winter and early spring. Females can be spotted in the garden collecting nesting material at this time of the year. 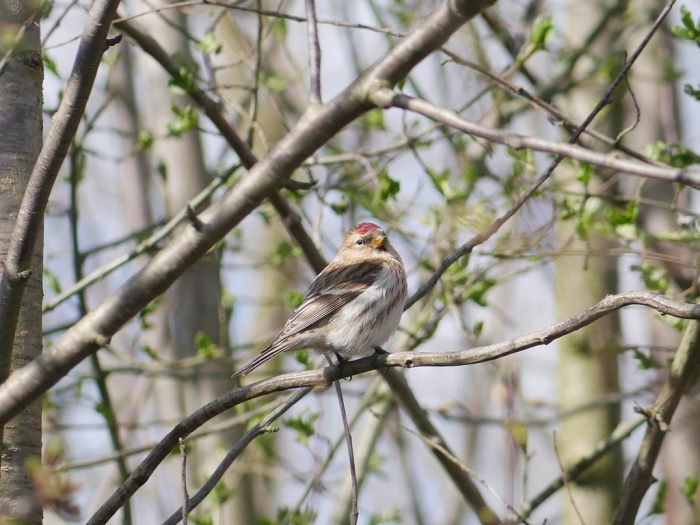 The common chaffinch is the most prevalent of the finch species in New Zealand. They usually feed on the ground hunting for seeds but can also be seen in amongst trees like pines, rimu and beeches, eating seeds. The male chaffinch has a hood of bright blue, a rusty red breast and a chestnut back. The wings are black and feature strong white bars and patches. The females sport muted brown-grey tones but have the same white wing markings. It is thought that the South Island and North Island populations have distinct dialects, making slightly different contact calls with each other. 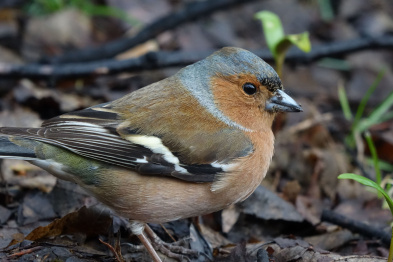 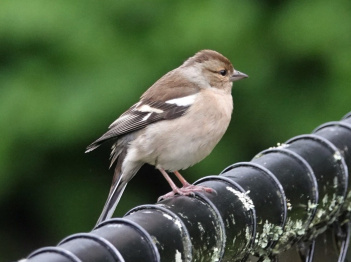