Like many museums of a certain age, we have a mummy.

She lives (or…not, as it were) in our People of the World gallery. 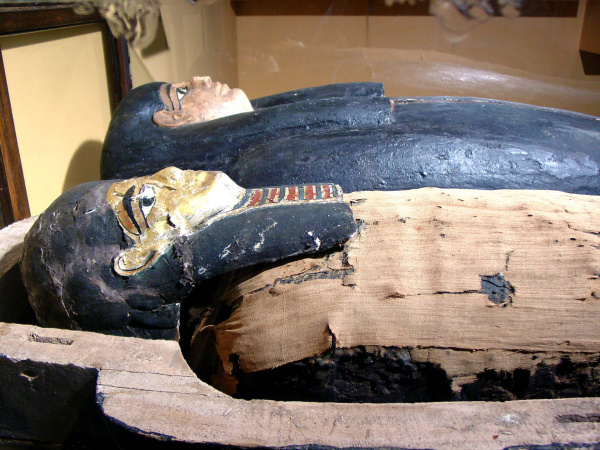 The mummy at the Otago Museum

Bendix Hallenstein of Hallenstein Brothers fame donated the mummy to that Otago Museum in 1894. Our records show it was purchased from a German consular agent in Luxor, Egypt, and shipped directly to Dunedin. Below is a scan of her accompanying letter of gift, dated Valentine's Day 1894: 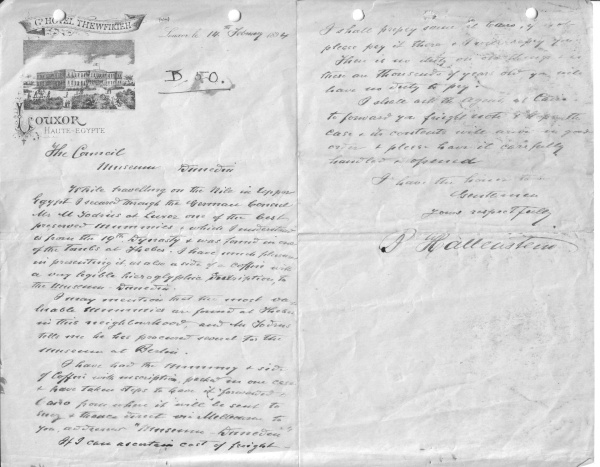 The letter of gift accompanying the mummy on her journey

It was a common belief in Ancient Egypt that for the essence of a person to survive in the afterlife, the corpse had to be preserved; hence mummification.

Over the last century, we’ve built a much more comprehensive understanding of who she was. Although we may never know her full story, it’s been rewarding to be able to restore some pieces of her identity.

It was originally thought that she might be a he because of the narrow pelvis. It wasn’t until an early X-ray was enhanced that it became clear the pelvic shape was distinctly female. That clarification, plus the hieroglyphics on the sarcophagus using a female pronoun, has confirmed her status.

A fragment of her linen wrapping was carbon-14 (C14) dated at the University of Waikato in 2001. Although the letter of gift suggested the mummy was probably from the 19th dynasty (around 3,200 years ago), the C14 results placed her death about 2,300 years ago.

In 2000, the mummy was scanned using computerised tomography at the Dunedin Public Hospital. It revealed a couple surprises:

Her abdominal organs were removed, wrapped in linen, then returned to her main body cavity. This was common for a mummy of her age, although earlier ones would have had their organs completely removed and placed in canopic jars. Those jars then stayed in the mummy’s tomb.

How did she die?

We aren’t certain. We do know she was probably around 30 to 40 years old when she died, though. Her bones indicate she had curvature and osteoarthritis in her lower spine. Her thoracic aorta artery shows signs of advanced hardening.

All but 12 of her teeth are missing. Her teeth and gums were badly abscessed at the time of her death. It’s possible that her poor oral health, which may have caused chronic pain, contributed to her death.

Although it was probably quite painful for her, the poor condition of her teeth is helpful in providing some clues for us – namely, that she may have been middle class. Middle class Egyptians had greater access to foods made with honey than peasants did, so their teeth were more likely to be subject to decay.

In 2008, the Museum worked with the University of Otago’s Department of Anatomy and Structural Biology to create a 3D model of the mummy’s skull from the information in the CT scan. An exact replica in resin was cast. Using a mathematical model, the soft tissue depths were predicted to create a realistic reconstruction of how the mummy’s facial features may have looked.

Her complexion and hairstyle were determined based on research carried out by our Humanities team.

You can see the final product, and learn more about the process, at the front of our People of the World gallery.