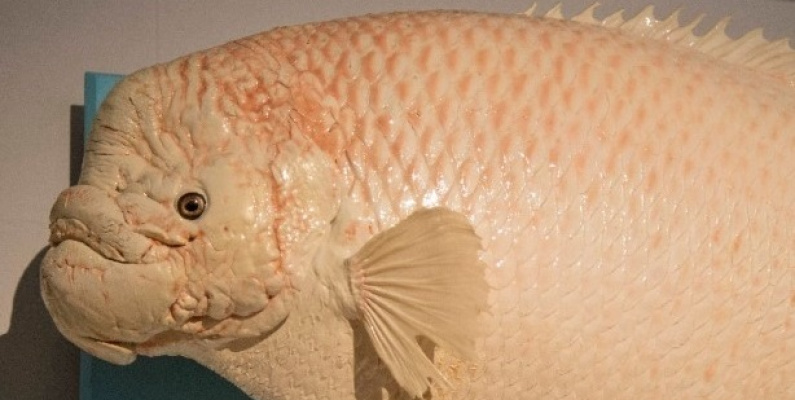 At Otago Museum, we use taxidermy and replica models in exhibits and displays to show the natural history of species and the biodiversity of life in different ecosystems. As the natural world is a colourful place, we endeavour to accurately portray this brilliance in the galleries.

For species that contain structural colour elements, such as bird feathers, fur, or insect exoskeletons, we keep their original colours by avoiding pest, moisture, or light damage. Fish specimens present an interesting problem in this area because their colour is in the form of chemical pigments which start to fade and degrade once the animal has died. Fish are often identified by their shape, colour, and diagnostic traits that are unique to species, so knowing colour patterns is important.  This knowledge is preserved using paint on specimens and replica models.

Visitors to Otago Museum have many opportunities to see specimens and models that have been painted to reflect the true colour of the fish.

There was a Hall of Marine Life at Otago Museum from 1966 until about 2000. This gallery featured more than 110 specimens of marine and freshwater species, and two large dioramas depicting marine life at a shallow coastal reef and another in the deep ocean featuring a long oarfish. The hoodwinker sunfish (Mola tecta), currently displayed at the ground level next to the lifts, was originally displayed in this gallery after it was modelled and cast from a real fish that died in Otago Harbour around 1961. Life-size models of blue cod, red cod, and other New Zealand native fish are also now displayed in the Southern Land, Southern People and Nature galleries. These colourful replica models show a sample of the biodiversity found in our local waters.

Otago Museum is also home to species that are not found locally and connects to our museum history.

Museum visitors from 1996 to 2004 would likely have met Eric the giant gourami while he was living in an aquarium near what is now Tūhura Otago Community Trust Science Centre. Giant gourami are native to South East Asian freshwater habitats and have been introduced to many areas for food and pet trade. These fish commonly have grey stripes as juveniles then turn a striking cream colour as they mature into adults. After dying of natural causes, Eric was carefully preserved and mounted by a taxidermist. He currently resides in  Tūhura..   Many of us may not have met Eric in life, but in death, he is one of our favourite painted fish at the museum.

Another painted fish with a well-researched history is the Queensland grouper on display in the Animal Attic. This fish connects Otago Museum to the Australian Museum and their celebrated illustrator Ethel King who completed painting this large fish for display in Dunedin’s 1925 – 1926 New Zealand and South Seas International Exhibition. In order to capture the colours and patterns of the fish as closely as possible, she made sketches as the fish thawed from a large block of ice before the fish was measured and preserved by Australian Museum taxidermist Henry S Grant and his assistants. A historic photo Ethel King seated next to this Queensland grouper was prominently featured at the Australian Museum cafe space during my last visit in 2016.

This humphead wrasse was featured in the ‘Sexiest’ category of Otago Museum’s est 1868 exhibition, and is a sequential hermaphrodite. It is capable of changing sex from female to male at about eight or nine years old, just after the female reaches sexual maturity. Some females abruptly lose their ovaries, develop testes, grow very large, and change colour from red-orange to  deep blue-green.  This species is native to the Great Barrier Reef and is also found in a wide range of Indo-Pacific reef habitats down to 100 metres. The species has been classified as Endangered by the IUCN since 2004 due to the decreasing numbers of mature individuals. This specimen was also prepared by Henry S Grant and painted by Ethel King.

The most famous example of an extinct New Zealand freshwater fish is the Grayling, or Upokororo. This fish was commonly found throughout New Zealand’s rivers and streams, but it experienced extreme population decline due to human impacts such as habitat degradation, overfishing, and the introduction of trout. The last confirmed sighting of a New Zealand grayling was in 1923. This Otago Museum specimen was collected in 1874 from Molyneux River (now referred to as Clutha River or Mata-au) in Otago and was used as template to cast a painted model. The taxidermy specimen is extremely rare and certainly looks its age, but the model looks as if it has been freshly caught.

Burns, E. 2016.  One that got to stay. Otago Daily Times. www.odt.co.nz/lifestyle/magazine/one-got-stay

With thanks to Rosi Crane and Anthony Harris for historical information about Otago Museum’s former Hall of Marine Life.